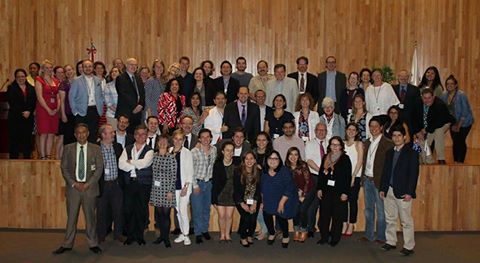 The photo here shows some of the more than 120 participants who attended the 12th Global Legal Skills Conference at the Facultad Libre de Derecho de Monterrey, Mexico. Participants came from more than 17 countries, including Australia, Canada, Germany, Ireland, the Netherlands, Qatar, Romania, Switzerland, Turkey, the United Kingdom, and the United States. The conference is the world's leading conference devoted to international legal skills education, including "Legal English" for non-native speakers of English.

This year's conference also included a bilingual contract negotiation workshop for U.S. law students who spoke Spanish. The students had an opportunity to negotiate contracts with law students from Mexico, to improve their Legal Spanish and to learn about negotiating styles in Latin America.

More information about the Global Legal Skills Awards can by found by clicking here.

The next Global Legal Skills Conference will be held more than 18 months from now in Melbourne, Australia in December 2018.