The website for the American Bar Association Journal shared that a reader had questioned the publication’s editorial judgment in describing a story of two women who pleaded guilty to criminal charges. The reader (going by the name "OKBankLaw" asked whether "pleaded" should instead be "pled."

Click here to read more about the great debate.

One Week Left for Early Bird Registration for the 2017 Global Legal Skills Conference in Mexico; Presentation Proposals Still Being Accepted Until January 28th 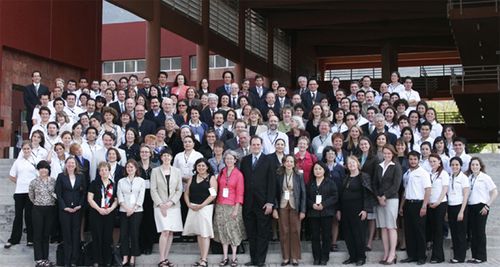 There's still a week left for the early bird registration for the 12th Global Legal Skills Conference being held at in Monterrey, Mexico at the Facultad Libre de Derecho de Monterrey (FLDM), a previous host of the third and fifth Global Legal Skills Conferences. The conference is being held March 15-17, 2017. There is an optional full-day city tour of Monterrey on Tuesday, March 14, 2017.

Proposals for presentations at the conference are also being accepted for another week.

The first Global Legal Skills started as a conference to connect legal writing and ESL professionals who had an interest in teaching international students and lawyers who speak English as a second language. The GLS Conference series has since grown to include not only legal writing faculty, but also international and comparative law professors, clinical faculty, linguists, librarians, judges, attorneys, court translators, law students, and scholars interested in global legal skills education. Now in its 12th iteration, the conference draws hundreds of professionals from around the world.

Click here for more information about the conference (including descriptions of presentations already accepted), the early bird registration, conference hotel discounts, city tour information, and nominations for the GLS Awards. 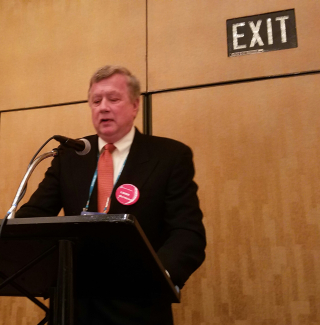 Professor Bob Brain (Loyola Law School, Los Angeles) is pictured here with an exit sign at the end of his term as Chair of the Association of American Law Schools Section on Legal Writing, Reasoning, and Research. He now joins a distinguished list of former section chairs who have advocated for legal writing professors within the AALS and the legal education community. He began his legal career in the litigation department of Gibson, Dunn & Crutcher, where he received a pro bono award from the LA County Bar Association for his work with Public Counsel, and represented the ACLU in a case before the U.S. Supreme Court. He later joined the faculty at Pepperdine University School of Law where he taught contracts, torts, constitutional law, sales, and trial practice. While at Pepperdine, he co-taught a course on the history of the U.S. Supreme Court with Chief Justice Rehnquist, tried cases on a volunteer basis for the LA District Attorney’s Office, and served as a commercial arbitrator for the American Arbitration Association. He later taught at Pacific McGeorge School of Law before becoming a partner at the litigation firm of Howarth & Smith where he tried fraud, defamation, securities, products liability, and assault matters, representing clients like the Republic of the Marshall Islands, Suzuki Motor Corporation and the victims of 9/11. He joined the Loyola faculty in 2006. He is a prolific author and an innovative teacher who has used and developed games for use in class, such as Contracts Jeopardy and Legal Writing Family Feud. If we only known about those innovations earlier, our survey says that we might have had a very different panel session at the AALS Annual Meeting. 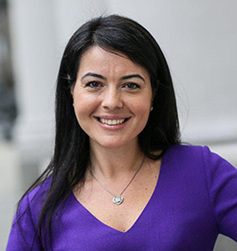 The new Section Chair is Professor Sabrina DeFabritiis (Suffolk University Law School). She graduated from Boston College and Suffolk University Law School, where she served as Vice President of the Moot Court Honor Board and the Journal of Trial and Appellate Advocacy. She was a member of the Moot Court Tax Team, which won the National Competition in 2002. Seems like yesterday. After clerking for the Justices of the Massachusetts Superior Court, Professor DeFabritiis spent approximately four years as an associate in the Boston office of Campbell Campbell Edwards &amp; Conroy P.C., where she practiced in their advanced motions and appellate practice department. She teaches Legal Practice Skills and Advanced Legal Writing. She also serves as the Faculty Advisor to the Foreign Direct Investments Moot Team and the Philip C. Jessup International Law Moot Court Team.

The new Section Chair-Elect (who will take office next January when the AALS meets in San Diego) is Professor Suzanna K. Moran (University of Denver, Sturm College of Law). The Section Secretary is Professor Wendy Adele Humphrey (Texas Tech University School of Law).

If you are interested in applying for the Visiting Assistant Professor  program, please submit a cover letter, current curriculum vitae, one writing sample, and a research agenda. You may address your cover letter to the "VAP Selection Committee.”  The school began accepting materials as of Nov. 1, 2016. Please email your materials to Lila Wilson at lila.wilson@kentlaw.itt.edu. 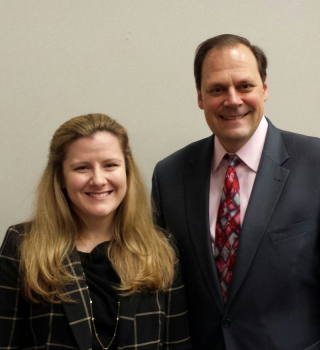 The American Bar Association Standing Committee on the Law Library of Congress will present a program on "How to Conduct Free Legal Research Online" on Friday, February 3, 2017 during the ABA Midyear Meeting in Miami, Florida.

The free legal research program will be held from 9:00 to 11:00 a.m. at the Marriott Hotel Biscayne Bay, Level 3, Lummus Island. The hotel is located at 1633 N Bayshore Drive, Miami, Florida

There is no registration fee for the ABA Midyear Meeting, but you must register to attend programs. Click here to register.

To be sure there are enough handouts (they often run out), please also RSVP to Annette Colman at annette.colman@americanbar.org

The American Constitution Society for Law and Policy has announced the judging panel for the 10th Annual Richard D. Cudahy Writing Competition on Regulatory and Administrative Law, honoring the late Judge Cudahy's contribution to the field.

The competition is open to practicing lawyers, policymakers, academics, and law students. A winner will be selected in both the lawyer and student categories. Each winning author will receive a cash prize of $1,500, as well as special recognition at the 2017 ACS National Convention.

The submission deadline is February 5, 2017.

The SSRN Homepage Gets an Upgrade

If you haven't visited the website for the Social Science Research Network ("SSRN") recently, you're in for some pleasant surprises. The new home page is more engaging and there's improvements in the full text searching. A new design for authors' pages is also in the works.

SSRN's eLibrary provides 710,460 research papers from 327,700 researchers across 24 disciplines, including law. SSRN provides materials that simply are not available anywhere else. Many of these materials are in the form of draft articles that have not yet been published. The original idea behind SSRN was to provide a platform for scholars to be able to share preliminary research and draft articles with other scholars, who could access the materials posted and communicate directly with the author.

If you're a litigator, a search of SSRN should be an essential step before deposing any expert. Search the topic of your legal issue as well as the names of your expert witnesses, opposing counsel, and parties. You may be surprised at what you can find on SSRN with a simple search.

Click here to have a look at the new homepage for SSRN. 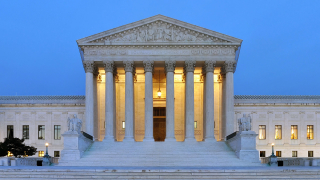 Bryan Garner has shared with us one of his favorite sources to find examples of excellent legal writing. It's the website with links to the briefs of the Solicitor General of the United States. The Solicitor General supervises and conducts government litigation in the U.S. Supreme Court. Almost all of that litigation is channeled through the Office of the Solicitor General and is actively conducted by the Office. The United States is involved in approximately two-thirds of all the cases the U.S. Supreme Court decides on the merits each year. Their briefs are well written and provide good examples for your own writing.

What I Wish I Knew About Learning Legal Writing

Here is a summary of some of the answers that students gave in a classroom in southern California:

And what do the students want to know more about now (rather than learning in April or May)?

Please let us know how your students answer this question (or how you might answer this yourself now with months or years of legal writing experience).