Legal writing legends Laurel Oates and Mimi Samuel of Seattle University School of Law are winners of 2016 Global Legal Skills Awards that were presented on May 26, 2016 at the 11th Global Legal Skills Conference in Verona, Italy. They have promoted global legal skills around the world by conducting training programs in Afghanistan, India, Uganda, South Africa, and elsewhere.

Professor Laurel Oates was the Director of Seattle University’s Legal Writing Program until 2012. She was a co-founder of the Legal Writing Institute, helped establish the LWI newsletter known as The Second Draft, and helped organize and host seven national LWI conferences, including the 1984, 1986, 1988, 1992, 1996, 2000, and 2004 conferences. She is the co-author of five books, including The Legal Writing Handbook, which is now in its sixth edition, and Just Research, Just Memos, Just Briefs, Just Writing, and a Practice Book.

During the last seven years, Professor Oates has taught workshops on legal writing in Afghanistan, Botswana, China, India, South Africa, and Uganda and has hosted programs for both students and lawyers in South Africa. In June 2007, Professor Oates received the Burton Award for Outstanding Contributions to Legal Writing Education at the Library of Congress in Washington D.C.; in October 2009 she received the Marjorie Rombauer Award for Contributions to the Teaching of Legal Writing. In October 2012 she received the Tom Holdych Award for Meritorious and Transformational Service. And now in 2016, she is also a recipient of a Global Legal Skills Award. 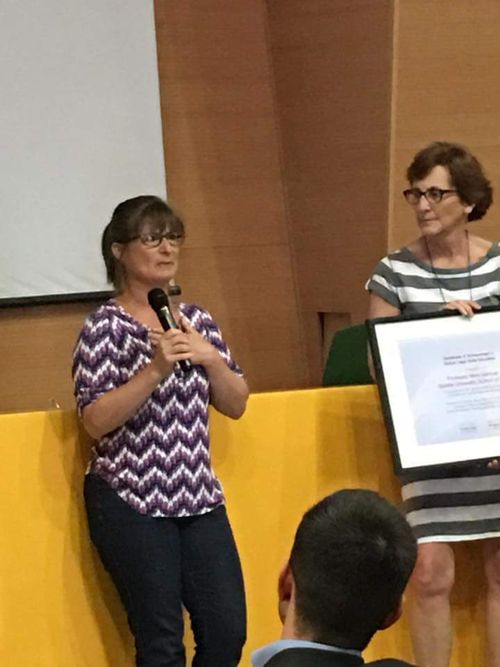 Mimi Samuel is an Associate Professor of Lawyering Skills and Associate Director of the Legal Writing Program at Seattle University School of Law. She embraces opportunities to work with law students, lawyers, and judges around the world. In 2003, she taught the foundations of the American legal system to Russian law students at Far Eastern National University in Vladivostok. In 2007, Professor Samuel and Laurel Oates conducted a series of workshops in India, Uganda, and South Africa. She also co-organized the Conference on the Pedagogy of Legal Writing for Academics in Nairobi, Kenya, which brought academics from the U.S. together with academics from East Africa. At the end of the conference, the participants decided to form a new organization ("APPEAL") dedicated to promoting the teaching of legal writing and the exchange of information among academics in the U.S. and Africa. Professor Samuel was the first U.S. co-president of that organization. Professor Samuel has also taught in Seattle University’s Global Justice Advocacy Program in Johannesburg, South Africa.

The GLS Awards were signed by the GLS-11 Conference Co-Chairs, Professor Stefano Troiano of the University of Verona Department of Law (where the conference was held) and Professor Mark E. Wojcik of The John Marshall Law School in Chicago (the founder of the GLS Conference Series). The awards were presented to Professors Oates and Samuel by two prior GLS award winners, Professor Hether Macfarlane of the Pacific McGeorge School of Law in California (in the photo, she is the one holding the award for Mimi Samuel) and Professor John Thornton of the Northwestern University Pritzker School of Law in Chicago.

Click here for more information about the GLS Awards and to see the full list of award recipients.