The Legal Writing Institute, the world's largest membership organization for persons concerned with legal writing and its teaching, has established a new Professional Status Committee to examine the national employment situation for professors who teach legal writing.  Read more about the committee by clicking here.  The new committee will serve as a resource for LWI members who are facing specific employment or professional development issues. The committee will also gather information about professional status issues and challenges that will help the LWI Board respond appropriately to various challenges and situations.
The seven members of the new Professional Status Committee are

Each day this week we are profiling one of the seven members of the committee. 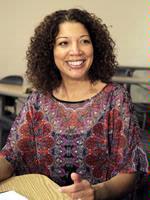 Olympia Duhart is Director of First-Year Lawyering Skills and Values Program at Nova Southeastern University Shepard Broad Law Center in Fort Lauderdale, Florida. She also teaches courses in constitutional law and Women & the Law.  She serves on the Board of Advisors for the Institute for Law Teaching and Learning and the Advisory Board for the LexisNexis Publications Advisory Board.
In January 2014, Professor Duhart began her two-year term as co-president of the Society of American Law Teachers (SALT). She serves with Professor Ruben Garcia of the University of Nevada, Las Vegas.

Before joining the faculty at NSU, Professor Duhart was a founding member of the Critical Skills Program at Nova. Previously, she worked as an attorney in the litigation department at Ruden McClosky. She also spent several years doing pro bono work with the Florida Innocence Project. Before attending law school, Professor Duhart taught in the English department at Marjory Stoneman Douglas High School in Parkland, Florida. Professor Duhart also worked as a staff reporter for The Miami Herald, where she covered municipal government and schools. Her articles have appeared in national print and in online magazines. She continues to contribute to blogs, including the NAACP Defenders Online, the SALTLAW blog, and The Huffington Post. Maybe someday we'll get her to write something for the Legal Writing Prof Blog!

Professor Duhart’s scholarship focuses government accountability for historically marginalized groups of people. She has published extensively on Hurricane Katrina survivors. She has most recently written about Post-Traumatic Stress Disorder among veterans and members of the military. She also served as a member of the Editorial Board for Vulnerable Populations and Transformative Teaching: A Critical Reader. In addition, Professor Duhart has written in the areas of active learning, assessments, and teaching methods. She is the co-author (along with Thomas Baker, William Araiza and Steve Friedland) of Skills and Values: Constitutional Law.

Here is the statement that Olympia shared with the Legal Writing Listserve to introduce herself as a member of the new Professional Status Committee:

I knew I had hit the big time. Not only had I just landed my first job as a law professor, but I was hired to teach legal research and writing. To me, that meant that my years as a newspaper reporter paid off. Or that someone appreciated how hard I had worked as a high school English teacher to make American Literature research papers exciting for my students.  Or maybe someone really understood how much pride I took in my writing ability in practice. Whatever the reason, I felt incredibly lucky to be hired as a law professor. I felt especially lucky to be walking into the most prestigious post in the law school. (What was more important than teaching LRW??)  But I got a reality check at the new teacher’s conference in Washington, D.C. One of the teaching “experts” brought in to train us was having a nice conversation with me when she realized I was hired to teach LRW.  “Why are you doing that? We have to get you on a tenure-track line teaching a doctrinal class.”  I was stunned that there was such a negative perception about the status of legal writing professors.  Since then, I have worked both formally and informally to challenge and correct those perceptions. Throughout the years, several other well-meaning people have encouraged me to switch to a “better” post.  But I love what I do. Even if it means that I’m doing it on a long-term contract basis.  And I know this is the big time. Now to get everyone else on board.

Listed below are links to weblogs that reference Meet the LWI Professional Status Committee: Olympia Duhart: