Many readers of this blog have visited the Law Library of Congress (or at least its rather fabulous website).

law graduates. She conducted focus groups of selected Dayton-area lawyers and found that they expect new graduates to exemplify professionalism, have strong research skills, and be effective legal writers. As writers, the new lawyers should consider their audience, write succinctly, and organize effectively, using IRAC. As a result of her research, Wawrose has added more varied assignments—including oral and email responses—to her legal writing course.

Florida International University College of Law, a public law school located in Miami, Florida, seeks applicants for entry-level or lateral appointments for the position of Lecturer in Legal Skills and Values. The start date for the position is August 2015.

The College of Law’s Legal Skills and Values program consists of two required courses in the first year of law school, and an additional required course by the end of a student’s fourth semester. We are seeking dedicated legal writing and skills teachers to teach legal research, analysis, and written and oral communication skills, all with a heavy emphasis on professionalism, to students in the first-year courses.

This is a full-time faculty appointment, with an initial one-year term, with the possibility of a three-year term and then successive five-year terms.  Anticipated salary is between $60,000 and $80,000, depending upon experience.

Qualified candidates should send a cover letter, curriculum vitae, and three references. The Appointments Committee may request additional material such as teaching evaluations and letters of recommendation.  Review will begin immediately and continue until the position or positions are filled.

Job Opening at the Law Library of Congress

The Law Technician for Inventory and Physical Controls is supervised by the Chief, Collection Services Division, Law Library of Congress. The incumbent ensures accountability of receipts by timely check-in of each serial or monographic piece received directly in the Law Library within a prescribed number of days following receipt. Records are created in the Integrated Library System (ILS) at point of check-in, as needed, to expedite processing. This position is located Collection Services Division, Global Legal Collection Directorate, Law Library of Congress. The position description number for this position is 64208. The salary range indicated reflects the locality pay adjustments for the Washington, D.C., Metropolitan area. The incumbent of this position will work a flextime work schedule. This is a non-supervisory, bargaining unit position. Relocation expenses will not be authorized for the person(s) selected under this vacancy announcement.
GS-07 - Law Library- $42,631.00- $55,421.00
Opening Date: 21-OCT-14
Closing Date: 04-NOV-14
Availability: Open to all

The successful candidate will play a key part in the students’ introduction to the Dual JD Degree Program and will teach one section of the year-long, nine-credit hour Comparative Legal Research and Writing course.  Typically, each section consists of approximately 30 students and is supported by at least one Teaching Assistant.

The School of Law is located at the Riverfront Campus in Downtown Detroit and is within  walking distance of federal, state, and municipal courts, the region’s largest law firms, and  major corporations, including General Motors, Quicken Loans, and Comerica Bank.  The School is also uniquely situated two blocks from the Detroit-Windsor Tunnel, an international border crossing that links Detroit, Michigan with Windsor, Ontario, Canada.

About the Dual JD Program

The close proximity to Canada has allowed UDM Law to partner with the Faculty of Law at the University of Windsor (Canada) to create a Dual JD Program that is the only program of its kind in the country.  Students are concurrently enrolled at both UDM and University of Windsor and attend classes that are fully integrated and wholly comparative, and taught by faculty at both institutions.  (Typically, the commute between the Detroit and Windsor law school campuses is about 20 minutes.)  Upon successful completion of the three-year program, students earn both an ABA-accredited JD and an accredited Canadian JD, and are eligible to sit for the bar examinations in both jurisdictions.  (Completing the two degrees would require either six years of study if done independently or four years if attending other dual programs.)

The course is a comprehensive comparative research, writing, and analysis course that is specifically designed for the Dual JD Program.  Students learn the similarities and differences between the American and Canadian legal systems, including governmental structure, court structure, jurisdiction, procedure, and ethics. Students also learn fundamental lawyering skills and explore the research, writing, and citation protocols in each country.  The course is structured so that for every major American assignment, there is a comparative Canadian assignment. The highlight of the course involves student participation in both an American and Canadian moot court experience.

About University of Detroit Mercy

The University of Detroit Mercy is an independent Catholic institution of higher education sponsored by the Religious Sisters of Mercy and Society of Jesus.  The university seeks qualified candidates who will contribute to the University's urban mission, commitment to diversity, and tradition of scholarly excellence.  The University of Detroit Mercy is an Equal Opportunity Affirmative Action Employer with a diverse faculty and student body and welcomes persons of all backgrounds.

Candidates must have a law degree from an accredited U.S. or Canadian law school, strong academic background, superior writing and communication skills, and a record or the promise of excellence and high scholarly achievement.  Preference will be given to candidates with law degrees, practice experience or significant exposure in both jurisdictions.

Applicants should send a curriculum vitae, a cover letter describing the applicant’s qualifications for the position, and details of at least three references to Professor Gary Maveal, Chair of Faculty Recruitment, University of Detroit Mercy School of Law, 651 E. Jefferson, Detroit, MI 48226.  Email applications may be sent to mavealgm@udmercy.edu. Review of applications will begin immediately and will continue until the position is filled.

The U.S. Supreme Court Has Gone to the Dogs

Arguments before the U.S. Supreme Court are not televised, but they can be re-enacted by dogs.  Have a look.  Really.  Click here or watch the video below.

As we noted in another post earlier this month, a recent Chronicle of Higher Education article is bluntly titled “Why Academics Stink at Writing.”  Steven Pinker, a Harvard psychology professor and author of The Sense of Style: The Thinking Person’s Guide to Writing in the 21st Century, indicts much academic writing as "academese": “turgid, soggy, wooden, bloated, clumsy, obscure, unpleasant to read, and impossible to understand.” Among academics’ offenses are “shudder quotes,” quotation marks that apologize for a term, as in “But this is not the ‘take-home message.’” The quotes suggest that although the writer couldn’t think of a better way to make the point, he or she is nevertheless a serious scholar. Pinker says there are several legitimate uses for quotation marks, but “[s]queamishness about one’s own choice of words is not among them.”

Legal writing professors are ahead of the curve on this: we have been steering our students away from academese and legalese for decades now. Pinker’s article serves as a reminder of particular aspects of the clear, uncluttered writing style we promote.

Through an agreement with the Library of Congress, the publisher William S. Hein & Co., Inc. has generously allowed the Law Library of Congress to offer free online access to historical U.S. legal materials from HeinOnline. These titles are available through the Library’s web portal, Guide to Law Online: U.S. Federal, and include:

Code of Federal Regulations (1938-1995)
From Guide to Law Online: Executive

For more details read the announcement on the Law Library of Congress blog, In Custodia Legis, at http://blogs.loc.gov/law/2014/10/free-public-access-to-federal-materials-on-guide-to-law-online/. 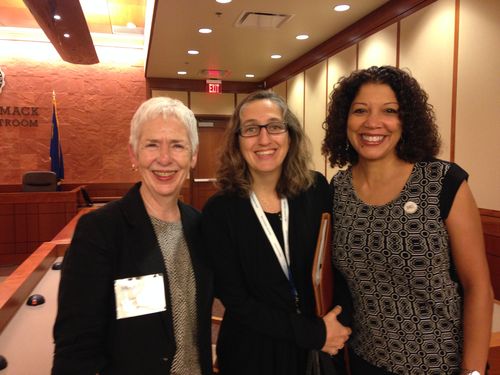 between legal writing scholarship and other subject areas. Kenneth Chestek’s The Life of the Law Has Not Been Logic: It Has Been Story echoes an Oliver Wendell Homes quote, which ended, “It has been experience.” Chestek (pictured at left) posits a world in which a computer decides Supreme Court cases by formula. He thus illustrates that formulas alone won’t work—“narrative reasoning” is important. He explains that “recent work in cognitive science and narrative theory” can underpin the work of the legal writing professors as they explore how lawyers persuade.

Michael R. Smith (pictured at right) cites sociological insights that can inform legal writing scholarship. In The Sociological and Cognitive Dimensions of Policy-Based Persuasion, Smith states that “social science scholarship offers many insights into human behavior that can assist legal advocates in improving the persuasiveness of their policy arguments.”

of his tips are especially appropriate for law students, who could appropriately paste "Don't rely exclusively on computer research" on the wall by their work space. That would serve as a reminder that unfocused computer searches are like a box of chocolates--you never know what you're going to get.  Garner also advises legal writers to be neither too tentative nor too cocksure in their conclusions, both of which are hazards for beginning law students. And Garner's tenth tip would improve the professionalism of many a student paper: "Proofread one more time than you think necessary." 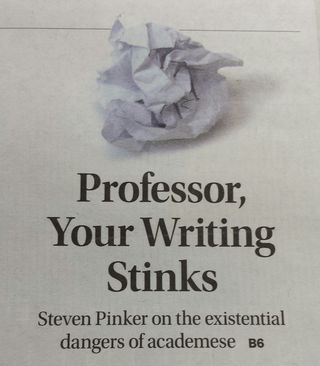 An article by Professor Steven Pinker in the October 3, 2014 issue of The Chronicle of Higher Education laments the unfortunate state of academic writing. Not legal writing (as readers of this blog would know), but academic writing in general. He notes that outside the academy bad writing is seen as a deliberate choice, and that some scholars may "spout obscure verbiage to hide the fact that they have nothing to say." Although he does not deny that having nothing to say may be true for some professors, others simply have writing that stinks.

His essay on this is worth reading, including its observations on metadiscourse, professional narcissism, abstraction, hedging, and the "Curse of Knowledge." He also notes, for example, that "Few graduate programs teach writing. Few academic jounals stipulate clarity among their criteria for acceptance, and few reviewers and editors enforce it."

Professor Pinker, a psychology professor at Harvard, is also the author of The Sense of Style: The Thinking Person's Guide to Writing in the 21st Century, published by Viking Press.

In concluding his essay, Professor Pinker admonishes that: "Our indifference to how we share the fruits of our intellectual labors is a betrayal of our calling to enhance the spread of knowledge. In writing badly, we are wasting each other's time, sowing confusion and error, and turing our profession into a laughingstock."

Professor Pinker, I think you'll find a lot of agreement from readers of our blog.

The October 3, 2014 issue of The Chronicle of Higher Education reminds us that the number of law school applicants has plummeted 45 percent from 2004 to 2014, citing preliminary figures from the American Bar Association. The Chronicle states that law schools were reaching deeper into the applicant pool and that bar pass rates were taking a hit.

Some schools have shown particularly large enrollment drops. Thomas Jefferson School of Law in San Diego, notes the article, went from 422 entering students in 2010 to only 242 students in 2014. That's a drop of 43 percent. See Katherine Mangan, Struggling Law School May Be a Canary in the Coal Mine, Chronicle of Higher Education, Oct. 3, 2014, at A8. Another school cited in the aritcle is Thomas Cooley, which saw a drop of 41 percent in its enrollment. Citing a report from the National Jurist, the Chronicle reports that Thomas Cooley had 3,931 enrollments in 2010 but only 2,334 in 2013.

The number of ABA-accredited law schools has grown in the past 15 years, growing from 182 schools in 1999 to 204 today (three of which are provisionally accredited).