Reminder! Today is the last day you can register for the LWI Biennial Conference in Philadelphia for only $535. The rate goes up tomorrow.

If you make a reservation at the Philadelphia Downtown Marriott, you'll be right across the street from our Reading Terminal Market, home of America's best sandwich (among other things).

A new proposal for gender-neutral language

Should the English language add new words to avoid gender-biased pronouns?  That suggestion keeps cropping up, as evidenced in Dennis Baron’s book Grammar and Gender, which catalogues such neologisms dating back the year 1850. Now South Dakota’s Charles Marshall Thatcher proposes to add to the list. In an article titled What Is “Eet”? A Proposal to Add a Series of Referent-Inclusive Third Person Singular Pronouns and Possessive Adjectives to the English Language for Use in Legal Drafting, Thatcher does indeed suggest the word eet, which would replace he, she, or it to refer to a person of unspecified sex. Other new pronouns would include ee, herim, hermit, and herimself. Example: “The statute applies to herim.”

Such neologisms have not caught on so far, and with good reason. They cause a reader to stumble, and some of them are, as William Safire once said, “unspeakable.” And there are more graceful ways to avoid biased pronouns, as I pointed out in my article on gender-neutral language in the federal courts. Two of the most common ones are changing a noun to the plural so a plural pronoun fits (“Lawyers should file their briefs on time”) or recasting the sentence (“Briefs should be filed on time.”)

My answer to Thatcher’s question is “Eet is not a word and should not become one.”

$20,000 Awarded in Scholarship Grants from LWI, ALWD, and LexisNexis

The Legal Writing Institute (LWI) and the Association of Legal Writing Directors (ALWD) have announced the recipients of the 2014 LWI/ALWD/LexisNexis Scholarship Grants.  A joint committee of members from LWI and ALWD evaluated the proposals and made funding recommendations, which both Boards affirmed.  This year, LWI and ALWD each raised their contributions to the grant program to $7500.  With LexisNexis contributing $5000, there was a total of four grants of $5000 each, for a total of $20,000.

The grant winners and names of the proposals are:

Job Market for Law Grads Improves (Slightly) for Third Year; Class of 2013 was Largest in History of Legal Education

A new article in the National Jurist magazine reports that the job market for recent law graduates is slowly improving, marking the third straight year of higher employment statistics. The article reports that 57 percent of the class of 2013 found long-term, full-time positions that require bar passage within nine months of graduation. Only 56.2 percent found similar jobs in 2012 and 54.9 percent in 2011.

The job placement numbers, even improving for a third year, are not where they should be and law graduates who cannot find full-time employment have a difficult time repaying student loans from college and law school. Law schools across the country have seen smaller numbers of applicants.

Despite the numbers of unemployed and underemployed lawyers, many clients remain in poor and underserved communities. Victims of housing discrimination, domestic violence victims, veterans seeking help obtaining benefits, and persons seeking help with political asylum applications are among the groups still looking for lawyers to help prepare their cases. 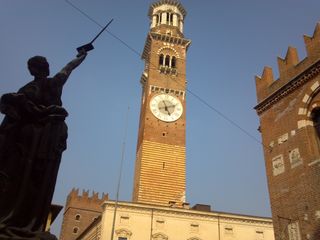 The ninth Global Legal Skills Conference will be held in Italy at the University of Verona Faculty of Law from May 21-23, 2014.

GLS-9 is co-sponsored by several leading international bar associations and professional organizations, including:

More than 150 speakers and presenters from over 30 countries are expected at the conference. Click here for more information including speakers, panel topics, hotel, and registration information.

The links below include two travel blogs about Verona as well as photographs from the last GLS conference in San Jose, Costa Rica.

Attention early birds! Don't forget the registration fee for the LWI Biennial Conference in Philadelphia goes up on May 1. Check out the LWI website for program, registration, and hotel information.

The ninth Global Legal Skills Conference will be held May 21-23, 2014 at the University of Verona Faculty of Law in Verona, Italy.  More than 140 participants are expected from around the world.  Here is a link to the draft conference schedule.

Shall we eliminate "shall"?

Lawyers are often told that the word shall is prescriptive, meaning that something is required. But

as NKU Chase Professor Phillip Sparks pointed out in a recent Kentucky Bench and Bar column, shall can actually have several meanings and may be more confusing than helpful. Sparkes points out that England, Scotland, Australia, and New Zealand have largely eliminated shall from legal writing. Often the simple present tense will suffice: in a definition, instead of "the chief executive officer shall mean  . . . ," the drafter can write,  " The chief executive officer means . . . " Sparkes concludes, "Shall is disappearing from standard English. Let's not rescue it for legal English, shall we?" Read the full column at page 26 of the March 2014 Bench and Bar Magazine.

U.S. District Judge Matthew F. Kennelly of the Northern District of Illinois recently advised lawyers to winnow their arguments down to the most effective ones. His article in the winter issue of Litigation quotes Judge Richard Prosser to caution against a "frivolous scattershot" approach to briefing.  Kennelly explains that a litigant has the judge's attention only briefly and should make the most of that time. Moreover, due to page or word limits, "weak arguments physically drive out better arguments." Kennelly's other advice on brief writing includes leaving out hyperbole and not making an argument that you are unwilling or unable to develop.

In a recent Chronicle of Higher Education article titled "Bad Writing and Bad Thinking," author Rachel Toor argues that some problems with students’ writing arise from their belief that they must write like others in their fields—even when that writing is clumsy. Instead, Toor says, students should follow George Orwell’s and Strunk and White’s advice about thinking and writing clearly. She adds, “Call me simple-minded, call me anti-intellectual, but I believe that most poor scholarly writing is a result of bad habits, of learning tricks of the academic trade as a way to try to fit in. And it's a result of lazy thinking.”  Law students’ exposure turgid judicial opinions may explain some of the problems they face in learning legal writing.

Southern California lawyer William Domnarski raises some provocative points about legal writing in his new book, Swimming in Deep Water: Lawyers, Judges, and Our Troubled Legal Profession, published by the ABA. In an essay titled Lawyers Writing, Domnarski argues that legal writing is not a separate genre, but that good legal writing is just good writing, a point he  says law schools don’t acknowledge. But legal writing professors may be closer to his view than he realizes. For years, I have quoted to my students Justice Scalia’s statement (which Domnarski references) that legal writing doesn’t exist as a separate genre. I point out that good legal writing has much in common with any good expository writing.  But I also alert the students that they need to be attuned to legal terminology. No, I don’t mean they should start using legalese like aforesaid, which Domnarski rightly condemns.  Instead I mean that students must understand and correctly use terms like battery and strict scrutiny.

I find more to disagree with in another essay, Legal Writing Instruction Misunderstood. There Domnarski argues that legal writing professors should teach grammar and usage, not legal analysis: “Language skills taught in legal writing classes have nothing to do with legal reasoning or knowledge of the law.” On that point Domnarski is wrong.  Our AALS section is named “The AALS Section on Legal Writing, Reasoning, and Research” because experts in the field recognize the connection between legal reasoning and legal writing. Domnarski himself seems to acknowledge this when he writes in the same essay, “What the lawyer writes is determined by the facts and the law, both of which the lawyer has almost no control over. Presenting whatever best commends an argument is the challenge for the lawyer in his writing.” In short, legal analysis is an integral part of legal writing.

Domnarski also bluntly advises, “Burn anything that Bryan Garner has written,” on the ground that Garner “perpetuates the idea that legal writing is somehow special.” I don’t think that’s Garner’s purpose, and I recognize his important contributions to the field. His Redbook on legal style is an invaluable reference on, among other things, English usage—which Domnarski agrees lawyers need to brush up on.

Words to eliminate from your legal writing

writing.  He explains that and/or is not a word, and that you can write perfectly well without it. He also lists the stuffy legalese words herein, pursuant to, whereas, witnesseth, same when it means it, and said when it's "a fancy-pants substitute for the."  See Garner's April column for his complete list of words and explanations of why you should eliminate them.