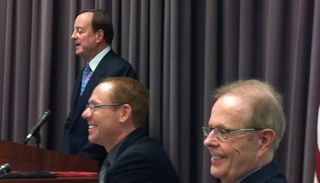 Scribes - The American Society of Legal Writers - gave a legal writing program last Friday at The John Marshall Law School in Chicago.  Shown here in the photograph are Judge Mark Painter (a board member of Scribes), panel moderator Anthony Niedwiecki (President-elect of ALWD and Director of the Lawyering Skills Program at John Marshall), and Joe Kimble (another board member of Scribes and professor at Thomas Cooley Law School in Michigan).

The legal writing program was well attended, including many students from The John Marshall Law School, adjunct professors from local law schools in Chicago, and even law clerks from the U.S. District Court for the Northern District of Illinois and the U.S. Court of Appeals for the Seventh Circuit.

The John Marshall Law School was the host of the Scribes Board Meeting this weekend in Chicago.  Other members of the Scribes board attending the meeting included Bryan Garner (editor of Black's Law Dictionary and author of many books on legal writing), Dean Darby Dickerson (author of the ALWD Citation Manual), Steve Smith (Dean at California Western School of Law and President of Scribes), and Judge Michael Hyman (former President of the Chicago Bar Association).

For those of you who are unfamiliar with Scribes, it publishes a journal (the 2010 issue included transcripts of interviews with eight U.S. Supreme Court Justices on their views on legal writing).  There's also an award luncheon held during the ABA Annual Meeting (this year, that luncheon will be on Friday, August 3, 2012 at the Union League Club of Chicago).  And Scribes also hosts its own writing conferences (the next one is in Washington, D.C. in May).  Get more information about Scribes by clicking here.

Mark E. Wojcik (a board member of Scribes)

Listed below are links to weblogs that reference Scribes Legal Writing Program at John Marshall: