changes on the ALWD Board 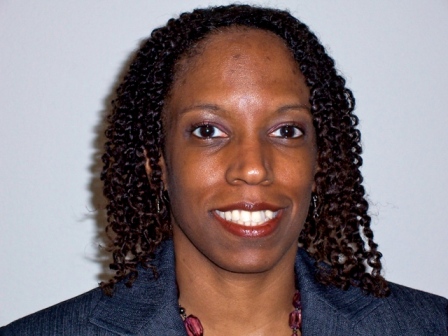 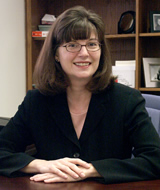 Share
Here's a reminder that nominations are due for the Blackwell Award.  The Legal Writing Institute and the Association of Legal Writing Directors sponsor a joint award in honor of the late Professor Thomas F. Blackwell of the Appalachian School of Law. Previous winners are Richard Neumann, Jr., Pamela Lysaght, Ralph Brill, Mary Beth Beazley, Lou Sirico, Diana Pratt, Linda Edwards, Steve Johansen, and Carol McCrehan Parker.  Nominations are due by 5 p.m. on July 8, 2011.  Contact Coleen Barger at the UALR William H. Bowen School of Law for more information -- she's the chair of the LWI-ALWD Committee.
(mew) 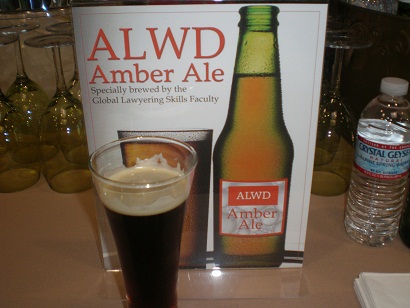 As you can see pictured here, the legal writing professors at Pacific McGeorge (who are more formally known as the Global Lawyering Skills Faculty), literally pulled out all the stops at the ALWD conference just held at their law school.  They even brewed ale for the event.

Photos from the June 23-25 ALWD Conference

Those who attended the recent ALWD Conference in Sacramento enjoyed both

informational and social events. Pictured at left are conference attendees and legal writing pioneers Marjorie Rombauer and Norm Brand, author of one of the early legal writing textbooks. At right, Cassandra Hill and Teri McMurtry-Chubb enjoy the plenary luncheon, where the Chief Justice of California gave a lively address. 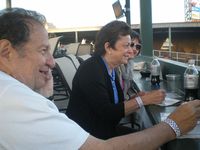 You know you want to.  Go ahead.  Visit the Legal Writing Institute online store on Land's End where you can order a variety of items with the LWI logo.  Click here.

opportunities for networking. A recurring theme was the ABA's new emphasis on assessments in law schools, which was the subject of several sessions.

A highlight was the luncheon speech by California Supreme Court Chief Justice Tani Cantil-Sakauye (pictured at right), who was engaging and informative as she discussed how the California courts are dealing with deep budget cuts.

Asked about legal writing, the Chief Justice emphasized that briefs should be clear and direct. She added that a brief is not a novel: she doesn't want to be surprised and looks for signposts that lay out the brief's structure. She also advised lawyers who disagree with the court's previous opinions to do so respectfully, especially if some of the same justices are still on the court. And she recommended that lawyers use "little ink for basic points."

Errors that particularly annoy the Chief Justice are frivolous arguments, misrepresentations of the record, and colloquialisms.

The conference planners, led by Nancy Soonpaa, and the faculty at McGeorge, led by Mary-Beth Moylan, deserve kudos for their superb planning and for making things run so smoothly.

We want to remind you about our earlier post praising Bryan Garner and Scribes for the incredible treasure in the current issue of Scribes.  Bryan interviewed justices of the U.S. Supreme Court about their views on legal writing and advocacy.  The transcripts are amazing -- you will learn things about the justices, and about legal writing and advocacy.  Click here for more information

If you're not a member of Scribes, seeing this issue of its journal should alone be enough to get you to join!

This year, full professor Charlene Smith, who teaches both LSV and Torts, received the University’s 12th Annual Student Life Achievement Award (STUEY), as Co-Curricular Advisor of the Year. The  STUEYs are university-wide awards presented annually to members of the Nova Southeastern community to recognize excellence in scholarship, leadership, involvement, service, commitment, integrity and inclusion. The award recipients in ten different categories were selected by a University committee based on nominations from each of the University’s 17 graduate and undergraduate program centers.  Charlene was nominated by the Law Center in recognition of her involvement as the Executive Director of the Inter-American Center for Human Rights.

And Assistant Professor Heather Baxter, who teaches LSV and Criminal Procedure, received the Stephanie Aleong Impact Award. The  Law Center’s Student Bar Association created the award in 2009 in memory of Professor Aleong, following her sudden death after a difficult battle with cancer. This unusual award consists of two parts: First, the Law Center faculty selects one student each year who is well-rounded and exemplifies the ideals of compassion, involvement in school and community activities, hard work, and dedication.  Then that student selects the faculty member who had the greatest impact during his or her law school career.

Congratulations to Charlene and Stepanie!

A millennium ago or so in Iceland, people took advantage of the longest days of the year to conduct legal matters. You can click here to learn how the Icelandic Parliament used to meet in the natural ampitheater partially pictured here, during the two weeks surrounding the solstice, to hear law cases. A man learned in the law, the Law Speaker, stood on Law Rock, about where you see the flag in the picture, to recite the law. He also made legal decisions, which were then voted on by some three dozen chieftains.

So, here's hoping you can put today's extra daylight to equally good use. Have a bright day!

If you know a lawyer or law student who struggles with grammar and other basic mechanics of legal writing, a helpful, new, online resource for them is Core Grammar for Lawyers.  It starts with a diagnostic test (which my students, teaching assistants and writing professors beta-tested last fall).  Some of what's tested is just standard American usage, making it easy to identify gaps in knowing how to use the basics of grammar, punctuation, etc.  Some of what's tested is unique usage for American lawyers, so don't expect new 1Ls to get more than about half the test correct.  Once they know where to focus, test takers can do the exercises and access the answers and explanations, as well as additional practice exercises. I'm thinking of having our whole 1L class use it this fall.  (And no, I don't get a penny from the publishers.)

Shawn Nevers has written a short article for Student Lawyer with practical tips on how to approach legal research in a law student's first summer law job."Observations for Summer Research Success" would be a good handout for the last LRW class in the spring, for law school libraries to have in a stack of near the door for students to help themselves, or for law offices to include in summer orientation materials.

Take a look at Jennifer Romig's book review, "The Legal Writer's Checklist Manifesto". In it she explains:

"Saving money, saving time, and saving lives: these are the accomplishments of the 'humble' checklist outlined in Atul Gawande, The Checklist Manifesto: How to Get Things Right (Metropolitan 2009). The Checklist Manifesto explores various types of checklists and their benefits for professionals working in
various fields such as medicine, aviation, and construction. This book review focuses on checklists’ potential benefits for lawyers - and more specifically, for lawyers engaged in the task of legal writing. Widely available checklists provide excellent tools for new lawyers to check their work and nternalize common stylistic practices of legal writing. These same checklists can also help experienced lawyers to edit their work efficiently and to notice and change bad writing habits they may have acquired. Yet the benefits of checklists extend beyond the individual writer laboring to complete an assignment. The Checklist Manifesto also explains the benefits of process-based checklists, which require members of a team simply to check in with one another at specified intervals. These process-based checklists could help teams of lawyers to work together more efficiently and produce more effective written work product. Process-based checklists also contribute to a healthy and open
working dynamic in which all members of a team have robust opportunities to participate. The Checklist Manifesto makes a compelling case for the benefits of checklists in various industries. Legal writing - as one concrete embodiment of law practice itself - stands equally to gain."

The religion editor from the local Lubbock paper recently retired and offered some great writing tips in her farewell column.  Among them:  simple and simplistic writing are very different; strive for the former.  Jargon can be used to confuse or enlighten, depending on the audience to whom the writing is directed. And this:

I encourage you to read the entire column.

Just the other day, a legal writing colleague was commenting on how crazy it is that half the country mixes up plurals with possessives. And now we get wind that an attorney in Missouri has filed a motion objecting to opposing counsel's use of possessives. You can read about it here.

Today I gave a talk about legal analysis and writing to the high school students in our Summer Law Institute.  Earlier, I had put out a call on the legal writing listserv for good cases to cover, and I received many helpful suggestions.  I finally decided on the McDonald’s coffee case (Liebeck v. McDonald’s Restaurants, which has no reported opinion). It’s a good springboard for discussing legal analysis, because so many people have only a superficial understanding of the case.

I also used the “I give you that orange” parody of legalese. (It has been attributed to both Timothy Walker and Arthur Symonds, as I explained in a recent article.)  The student who best translated the parody into plain English won a prize.

Some of the students’ essays contained organizational problems and run-on sentences, comma-splices, and sentence fragments. I was disheartened when several said they are not receiving feedback on their writing. Two explained that their essays are just thrown into folders. And one bright young woman said she had never learned anything about grammar until this year. If those reports are accurate, the schools are doing the students a disservice by not preparing them better for advanced studies.

Cathren Koehlert will be the newest Assistant Professor of Law in the Legal Research and Writing Program at Barry University in the fall.  She's already been using Skype to join the team for forward planning.

And Deborah Borman will be joining the faculty at the University of Denver as a Visiting Professor in the Lawyering Process Program this the fall.  She's previously worked on the Journal of the Legal Writing Institute and taught legal writing at Northwestern, DePaul, and The John Marshall Law School in Chicago.

The 12th Annual Burton Awards for Legal Writing honor judges, lawyers, law professors, and others for their skill in legal writing and their public interest service.  The awards are organized and sponsored by William Burton, an amazing individual who was himself honored by the Legal Writing Institute Golden Pen Award.

In this year's installment of the Burton Awards, Professor Joe Kimble (Thomas Cooley) was honored (for a second time at the Burton Awards).  He was recognized for his work as the Plain English Drafting Consultant to the Commission on Redrafting the Federal Rules of Evidence.

Also honored (and previously reported here on this blog) was Marjorie Rombauer, the first tenure-track teacher to create and teach a course in Legal Writing and Analysis.  She authored one of the first books on legal writing (because there were none at the time).  Ralph Brill tells us that West Publishing at first declined to publish the book because there was no market for such a course.

Click here for more information about the Burton Awards.

Over on the law librarians' blog, you can find the results of an informal poll of law librarians about WestlawNext. Whether you work with new lawyers in a law office or you teach law students in a law school, it's worthwhile reading. The comments at the end are certainly revealing.