Potential for serious weather heading into the gulf next week

Could anything be worse than the BP offshore drilling debacle that's turned into the worst natural disaster in U.S. history and will undoubtedly affect the economies of the gulf states for years to come?  How about adding a few dozen hurricanes to really stir things up?

According to FoxNews, there are a couple of weather systems now forming in the Atlantic one of which might  move into the gulf in the next couple of days.  After making landfall in Central America, if it then heads into the gulf, it will most likely track toward Mexico or Texas according to the forecasters at weather.com.

Here's a picture of their map: 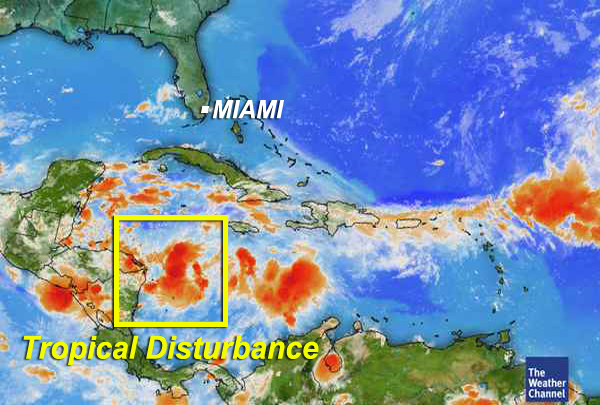 The National Hurricane Center (NHC) warned Friday morning of not one but two weather formations in the Gulf of Mexico, both with the potential to swell into more serious weather systems. Responders in the Gulf of Mexico are eyeing the storm system closely, to see whether it turns towards the Gulf and interferes with ability to mop up spilled oil and cap the leaking well.  "We're watching the storm very, very closely," former Coast Guard commander and national incident commander Thad Allen told Fox News.

There is a 70 percent chance that the low-pressure area centered off the coast of Honduras could become a tropical cyclone during the next 48 hours, warned the NHC, indicating winds as fast as 73 mph. Any faster and the storm could officially become the first Gulf hurricane of the season -- and will be named Alex.

Meanwhile, a smaller weather formation just East of the Northern Leeward Islands is also being eyed. NHC describes it as "a large but disorganized area of cloudiness and showers ... associated with a tropical wave interacting with an upper level trough."
. . . .
Joe Bastardi, Accuweather's chief hurricane expert, told FoxNews.com that the storm probably won't rage through the Gulf of Mexico, though it could become a hurricane. Instead it will move towards Belize, making landfall there by Sunday. By Monday it could reach Mexico, making landfall Tuesday somewhere between Tampico, Mexico, and Corpus Christi, Texas, he predicts.

But regardless of the strength of this first storm,  Bastardi worries that these storms are indicative of the severity of the season ahead. And raging storms will undoubtedly hamper efforts to clean up the massive Gulf oil spill.

The National Oceanic and Atmospheric Agency (NOAA) has predicted an active season, with as many as 23 named tropical storms. An estimated 8 to 14 of those storms could strengthen into hurricanes, and of those storms, 3 to 7 could become major hurricanes, NOAA said.
. . . .
[T]he real worry is that a hurricane might turn the millions of gallons of floating crude into a crashing black surf. A NOAA factsheet on the topic leaves many questions open. "The high winds may distribute oil over a wider area, but it is difficult to model exactly where the oil may be transported," it notes, and also points out that "movement of oil would depend greatly on the track of the hurricane." 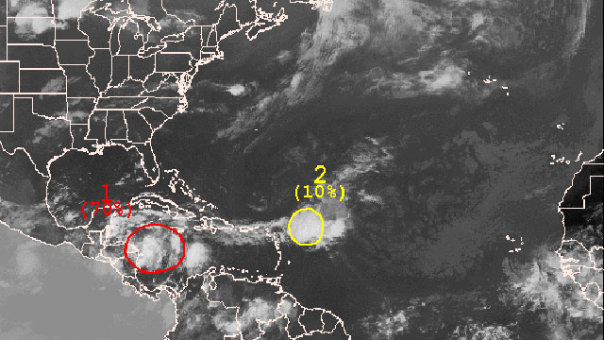 Read the rest of FoxNews' coverage here or, if you prefer, here's the site for the National Weather Service.

Listed below are links to weblogs that reference Potential for serious weather heading into the gulf next week: