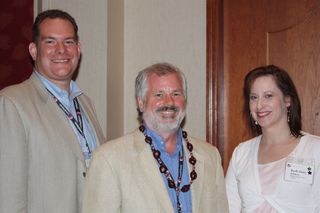 Here are some photos from the LWI Conference at Marco Island.  Click on any photo to enlarge it.

The the photo at the left, Jeremy Francis of Michigan State University College of Law was selected as the winner of the second Deborah Hecht Memorial Writing Contest Award.  Dr. Francis won his award for his article Finding Your Voice while Learning to Dance, which appeared in Volume 24, Number 1 of The Second Draft (Fall 2009).

Standing in the center of the photo to the left is Steve Johansen, who won the Blackwell Award which is jointly presented by the Association of Legal Writing Directors (ALWD) and the Legal Writing Institute.  Click here to read more about that award, which was originally presented at a spectacular party in New Orleans at the annual meeting of the Association of American Law Schools.

Also pictured is the immediate past president of the Legal Writing Institute, Ruth Anne Robbins.

Listed below are links to weblogs that reference Award Winners at Marco Island: