The 14th Biennial Conference of the Legal Writing Institute at the Marriott Hotel on Marco Island, Florida finished its first full day of programming.  The conference is the best attended ever in the 25-year anniversary of the Legal Writing Institute.  Energy fills the hallways, sessions, and receptions as colleagues from around the country—and a few other countries—exchange information and ideas on how we teach legal research, analysis, and writing.

The sessions are of the highest quality and value to the attendees, from new teachers of writing to the most experienced. The program committee did a fantastic job picking programs.

Here’s an example of one of the really great programs I attended today.

Michael R. Smith, the Winston S. Howard Distinguished Professor of Law and Director of Legal Writing at the University of Wyoming College of Law, presented on the subject “Ethos: Establishing Credibility in Persuasive Legal Writing.”  Michael’s presentation was based in part on his book, Advanced Legal Writing: Theories and Strategies in Persuasive Writing (Aspen Publishing 2008).  In an interactive presentation, he discussed how courts dealt with the issue of attorney credibility in cases such as these: 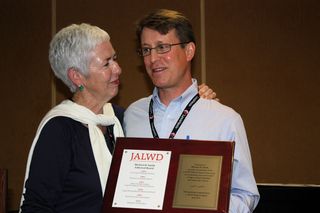 His presentation also included a staged reading of part of the script of “Mr. Smith Goes to Washington” that illustrated how enthusiasm for an argument could increase its success (quoting a senator who told a colleague that “most of us feel that no man who wasn’t sincere could stage a fight like this against those impossible odds”).

Michael’s presentation emphasized that character, intelligence, and good will are important components of credibility, and discussed how to increase those components, such as by evincing a trustworthy character through truthfulness, candor, zeal, respect, and professionalism.  His useful and interesting materials and presentation included a number of teaching tips that attendees took back with them.

At the end of Michael’s presentation, he was surprised by a presentation made by Ruth Anne Robbins (the immediate past president of LWI), Linda Berger (pictured here with Michael; she is one of the editors of the Journal of the Legal Writing Institute), and Mary Beth Beazley (president of the ALWD), who presented him with a plaque to recognize his service to JALWD.  (Click on the photo to enlarge it.)

Listed below are links to weblogs that reference Some highlights from Day One of the LWI Conference at Marco Island: