On April 30th, The Legal Whiteboard will cease publication.  During our 5+ years of operations, we generated some very good content, focusing on facts, trends and ideas affecting the legal industry. We made the ABA LawBlawg 100 in 2012 (year 1) and 2016 (year 5).  In particular, some of the most widely read posts were written by Jerry Organ, who focused on legal education.  Jerry painstakingly built numerous datasets to answer important questions related to conditional scholarships, the transfer market, and bar passage. It was a privilege to be associated with this work. I am personally grateful to Blog Emperor Paul Caron for providing us this platform and graciously agreeing to continue to archive our content on the Law Professor Blog Network.

I was the primary editor who launched The Legal Whiteboard. It was also my decision to shut it down.  The reason is not lack of interest in the blogging medium — in fact, the opposite is true.   For the last several years, mediums that started as blogs have been siphoning off readership – and thus power and influence -- from traditional media.  Online publication also facilitates connections with people outside one’s academic silo.  For over a decade now, my online writing has connected me with numerous professionals in law firms, legal departments, bar associations, and legal start-ups. In most cases, I am trading information with my readers, collecting local experience in exchange for macro-level observations. These connections produced countless friendships, enriched my teaching and research, and changed how I viewed the world.

There is a tension between what counts as serious work inside the academy (e.g., placement and citations in prestigious journals; mentions in the New York Times, etc.) and how serious people in and outside of the academy are accessing information to help them do their work. This is an observation, not a complaint.  Professional and social norms evolve slowly, often to the point of feeling static.  But they do evolve, and generally in the right direction.

I am shutting down The Legal Whiteboard so I can make a more ambitious investment in online publishing.  For the next year or so, and perhaps longer if the experiment works, virtually all of my professional efforts outside of teaching will be focused on building an online publication for my core research on the legal industry.  The publication will be called Legal Evolution.

At this point in my career, I am very interested in doing applied research – i.e., research targeted at solving practical, real world problems. Examples of applied research include rural sociology (agricultural production), industrial/organizational psychology (worker productivity), public health (health outcomes). Online publication drops the cost of doing this type of work while increasing its potential impact – that is a powerful reason to give it a try.

Legal Evolution will be focused on the practical problem of lagging legal productivity in a world of rapidly increasing complexity.   Lagging productivity among lawyers is a serious industry-level issue because it means that solving legal problems is becoming, in a relative sense, more expensive over time.  In the individual client market, more citizens are going without access to legal services.  In the corporate market, heavy reliance on fee discounts is straining client-lawyer relations, as they have yet to see that the only long-term solution is to improve productivity through better systems and more sophisticated sourcing. The second-order effects of lagging legal productivity are now impacting legal education through stagnant entry-level salaries and historically low enrollment levels. I don't think the law professoriate fully appreciates this linkage.

We lawyers and law professors lack the skills and expertise to solve the legal productivity problem by ourselves.  Whatever form the solutions take, we can be 100% certain that the inputs will be multidisciplinary.  Lawyers and law professors who collaborate with professionals from other disciplines will move a lot faster than those trying to stay at the top of the food chain. The ultimate goal of Legal Evolution is to accelerate this transition by curating examples of what is working in the field, including contextual knowledge to help readers make better decisions within their own organizations. 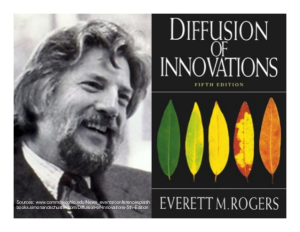 Applied research needs to be driven by theory.  Legal Evolution’s editorial strategy will be grounded in the research of the late sociologist Everett Rogers, whose seminal book, Diffusions of Innovations, is one of the most cited books in all of the social sciences.  The first edition of Rogers' book was published in 1962.  In turn, he spent much of his 40+ year career updating subsequent editions with ever richer examples that (a) supported a general theory of innovation diffusion, and (b) demonstrated how knowledge of diffusion theory could be used to accelerate the adoption of innovation, often for important, socially beneficial ends.

In my own career, shutting down The Legal Whiteboard feels like the end of era, albeit it is necessary to make room for something new.   In the fall of 2008, as I assembled my tenure file at Indiana Law, I remember creating a final attachment ("Attachment 7") that summarized my “internet writings.”  It was a list 216 blog posts I had published between April 2006 (when I joined the Empirical Legal Studies Blog) and Labor Day 2008. For visual effect, I created a hyperlink for all 216 posts. I can remember one of my advisors telling me that I didn’t need the summary and besides, it wouldn’t count toward tenure.  I replied, “I know I don’t need it.  I know it won’t count.  But I am putting it in because I think this work is valuable.  At some point in the future, it ought to count.”

I wrote that nearly 10 years ago. I have learned a lot since then.  With some luck, maybe I can nudge legal academic norms in a positive direction.

Over the next couple of weeks, we will be reposting some of our favorite LWB stuff.  After April 30th, I hope to see you on the other side.  Many thanks for your readership.

We lawyers and law professors lack the skills and expertise to solve the legal productivity problem by ourselves. Whatever form the solutions take, we can be 100% certain that the inputs will be multidisciplinary. Please would you keep me informed of your activity. I do so agree. Judicial Review of Executive Action was the lego-idea of the 1960's and work to be done on "regulation" is in deep need of how mega-interests lobby themselves into protection.
Arnold 46 Adam and Eve Mews London W8 6UJ.

All the best, Bill. I have enjoyed, and benefited from, this site as both a law firm manager and law school teacher. I looked forward to reading your insight in Legal Whiteboard. Tom