The biggest break I ever got in my academic career occurred nearly ten years ago when I attended the Council meeting for the Section on Legal Education and Admissions to the Bar at the August 2007 ABA Annual Meeting.  I was one of the people who sat along the wall and listened to the proceedings.  There was zero audience participation, though we were allowed to drink their coffee.  I was an untenured professor trying to understand how these complex institutions worked. 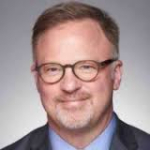 I vividly remember Jim Leipold entering the room and handing out a graphic to everyone (including the wall folks) showing the distribution of entry-level salaries for the class of 2006 -- the now famous bi-modal distribution. Jim used the graphic as the centerpiece of his NALP report to the Council.  Totally shocked by what I was looking at, I remember thinking, "Can I write about this chart?" I subsequently asked Jim for permission. The first bi-modal post was titled "Distribution of 2006 Starting Salaries: Best Graphic Chart of the Year."  See ELS Blog, Sept 4, 2007.  I have a hard time arguing with the maxim, "the most important thing in life is showing up"  (permanent H/T to NALP and Jim Leipold).

Below is a detailed analysis of the bi-modal distribution from July 15, 2012 -- five years after the original graphic was published.  The right mode was in the process of melting. Suffice it to say, a decade has changed nearly everything in legal education because so much has changed in the entry-level market.  There remains a lot of work to be done on understanding the legal labor market, if for no other reasons than to enable law schools to make better decisions on strategy and operations.  For the record, I believe the demand for legal education is shifting rather than shrinking.

A Picture of the Melting Right Mode

I created the graphic below to depict the shrinking right mode of the bi-modal distribution since its 2007 high water mark (measured in February 2008). 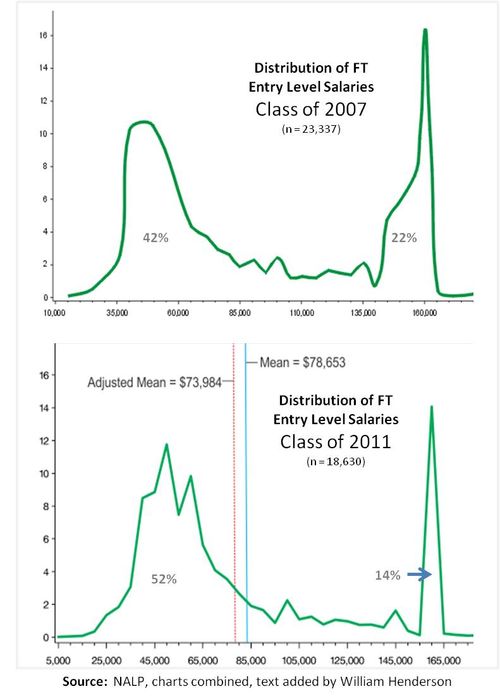 [Note: The difference between the mean and adjusted mean in the 2011 distribution is due to the fact that law grads who fail to report their salaries tend to have have less lucrative employment; so NALP makes a prudent statistical correction --basically a weighted average based on practice settings.]

From a labor market perspective, the class of 2007 entry level salary distribution was extraordinary and anomalous.  Why?  Because we can safely assume that legal ability, however it might be defined, is normally distributed, not bi-modal.  So when such a distribution appears in a real labor market, something is significantly out of kilter.

Why did the entry level market become bi-modal? As the legal economy boomed from the mid-90s through the mid-00s, many large law firms (NLJ 250, AmLaw 200) were trying to make the jump from regional dominant brands to national law firms.  For decades, going back to the early to mid-20th century, these firms followed a simple formula: hire the best and brightest from the nation's elite law schools. As they continued to enjoy growth, they reflexively followed that same formula.  Yet, by 2000s, the demand for elite law graduates finally outstripped supply.

This micro-level logic ("let's not tinker with our business model") produced a macro-level bidding war.  This is how the right mode came to be.  Yet, because it was a macro-level phenomenon, clients, led by industry groups such as the Association of Corporate Counsel (ACC), reacted by saying, "Don't put any junior level lawyers on my matters --they are overpriced."  Outsourcing and e-discovery vendors have also eaten into the work that used to go to entry level lawyers.  So the volume of BigLaw hiring has collapsed, hence the melting of the right mode. For a more detailed overview, see NALP, Salary Distribution Curve.

That said, it is not just the entry level market that is under stress -- the fundamental economics of Big Law are also changing.  Consider the chart below (from Henderson, Rise and Fall, Am Law June 2012), which shows that revenues per lawyer at AmLaw 100 firms has gone flat and moved sideways since 2007, breaking a pattern of steady growth that dates back to the pre-Am Law 100 days. 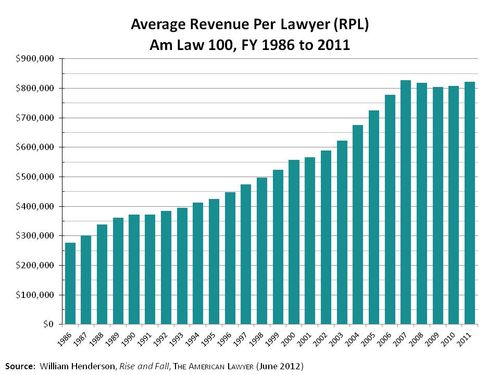 Stagnant revenue is a source of enormous worry for law firm managers.  Without higher profits to distribute--and growing the top line is the usual profitability fomula--their biggest producers might leave, causing a run on the bank ala Dewey, Howrey, Wolf Block, etc.  So the dominant strategy now has nothing to do with entry level hiring.  Rather, the goal is to keep and acquire lateral partners with portable books of business.  After all, clients aren't protesting the value of most senior level lawyers. And seniors lawyers are plentiful, thanks to the excellent health of baby boom lawyers and the poor health of their retirement accounts.

This strategy may work fine for this fiscal year, but over the middle to long term, BigLaw is going to get older and dumber.  Further, this dynamic produces substantial ripple effects on legal education -- albeit ripple effects that feel like tremors.

The long term solution -- for both law firms and law schools -- is for the price of entry level talent to come down to the point where young lawyers are more cost-effective to train.  And that price point is not $160,000.  This inflated pay scale (which has supported ever higher tuitions at law schools) only persists because large firms are deathly afraid of adjusting their salary scales and being labeled second rate.  So the solution is keep the entry pay high but hire very few law school graduates.  This is not a farsighted or innovative business strategy.

It's been 100 years since law firms engaged in sophisticated business thinking. And that last great idea was the Cravath System, which was method of workplace organization that performed expert client work while simultaneously developing more and better human capital.  See Henderson, Three Generations of Lawyers: Generalista, Specialists, Project Managers.   According to the Cravath Swaine & Moore firm history, published in 1948, the whole point of the Cravath System was to make "a better lawyer faster."

I think the next great model for a legal service organization (law firm may not be the right term) likewise will be based on the idea that there is a large return to be had by investing in young lawyers. As my friend Paul Lippe likes to say, "When it appears, it will look obvious."