The GRE and the Revised US News Ranking Methodology

When I initially learned that Harvard Law would start accepting the GRE as an alternative to the LSAT, I viewed it through the prism of the US News & World Report ranking and concluded that it was a very good thing for Harvard and all of legal education. Aggressive rankings management has led to tremendous over-reliance on the LSAT. By using on the GRE, I reasoned, Harvard would have sufficient test score information to assess a candidate's intellectual capacity while also obtaining the freedom to use other admissions methods to explore the larger and more diverse universe of candidates who are destined to become great leaders and lawyers.

My thinking is crudely sketched out in the diagram below. 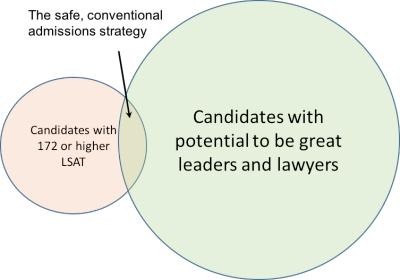 Yet, in making admission decisions, did Harvard Law really feel constrained by US News?  Was the move toward the GRE motivated by something else? I failed to ask myself these questions. My thinking was too small.

If Harvard Law was trying to get around U.S. News rankings formula, the USN chief strategy officer, Bob Morse, saw it coming.  Harvard got a lot of favorable attention on March 8 when it announced its new GRE policy.  A few days later, when US News released its 2018 law school rankings, something that got zero attention was a very significant change in the USN rankings methodology. Here is the description of the selectivity factor that was previously limited to the LSAT:

Median LSAT and GRE scores (0.125): These are the combined median scores on the Law School Admission Test of all 2016 full-time and part-time entrants to the J.D. program. For the first time, U.S. News used median GRE scores in combination with LSAT scores for this indicator if they were reported for a law school's 2016 entering class. The University of Arizona was the only school that reported both LSAT and GRE scores to U.S. News for its 2016 entering class.

This is the same methodology that US News uses for colleges that admit based on both the ACT and SAT.  USN converts the medians to their percentile equivalents and weights them based on their proportion in the total enrolled student population. This year, only the University of Arizona had such a combined median. If so, which GRE median was being factored in -- the verbal, the quantitative, or both?

Regardless, this methodology change means that the GRE strategy won't be an effective way to break free of the ranking's powerful influence on admissions decisions.  Which led me to ask, "Is Harvard Law's move on the GRE still a game-changer for legal education?"

I think the answer is yes, but for reasons that are not as obvious as a potential bump in a school's USN ranking.   The contours of a potentially powerful GRE strategy are laid out in an article I wrote for Law.com, titled "Underestimate Harvard Law's New Admissions Strategy at Your Own Risk."