The work of lawyers is increasingly the work of businesses rather than people.  This conclusion flows from recently released Economic Census data, which is the U.S. Government's "official five-year measure of American business and the economy."

For the two most recent years (2007 and 2012), the Economic Census data includes an analysis called Revenues/Receipts by Class of Customer for Selected Industries.  The chart below compares these two years for Offices of Lawyers (NAICS 541110). 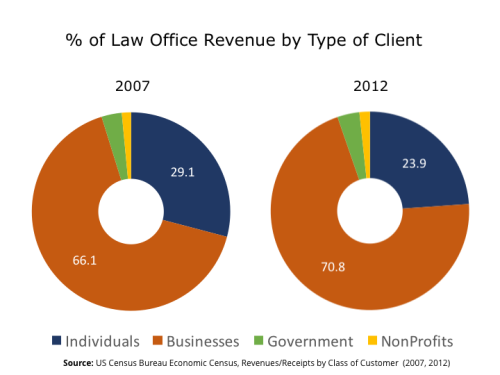 From 2007 to 2012, the share of total law office receipts shifted by about 5% away from individuals toward businesses. Revenues for Offices of Lawyers grew during this period from $225 billion to $246 billion.  However, when we run the numbers, the total receipts for lawyers serving people declined from $65 billion to $59 billion.  That is a relatively large absolute decline in just five years.  It suggests an actual contraction in the amount of legal work for people. Yet during this same period, the nation grew from 288 million to 302 million people

These fairly stark results continue the trendlines of the Chicago Lawyers I and II studies.  Chicago Lawyer I showed that roughly half of lawyers in Chicago in 1975 were working for people and half were working for corporations. This was the basis for the Heinz-Laumann two-hemisphere theory.  When the study was replicated in 1995 (Chicago Lawyers II), the data showed twice as many organizational lawyers versus people lawyers, so hemi (as in half) no longer applied.  Further, among lawyers in solo and small firms -- the primary practice setting for people lawyers -- income had dropped significantly in inflation-adjusted dollars. In contrast, lawyers in large firms and in corporate legal departments experienced significant gains.

If during the 2007 to 2012 timeframe the proportion of people work dropped from 29.1% to 23.9%, what does that number look like today?  We will not know definitively until 2020 or 2021 when the Census Bureau releases the class of customer data from the 2017 Economic Census, yet a further decline certainly seems likely, particularly as services like LegalZoom and RocketLawyer continue to target the retail market.  Separate and apart from these new entrants, to what extent is the diminution in people lawyers driven by declining real incomes within the middle class?

It is possible that the archetypical images of private practice lawyers are becoming more and more out-of-sync with what is happening in the actual market.  For those creating law school curricula or setting policy around access to justice, we are going to need new mental models of what it means to be a lawyer.

Current events, Data on the profession, New and Noteworthy | Permalink

Imagine being a legislator sitting a the Higher Education budget session, thinking, if only 30% of legal income comes from non-business sources, and I am okay with letting businesses pay for their own vendors and support systems, what should I do about the tax allocation for our state operated law schools?

Implications for regulatory and licensing models as well. As lawyers recede from direct public service, everything from who can provide legal services to who can own law firms should be on the table.

I'd be curious to see whether the growth in class actions has had any effect on this trend. Maybe not, but it may be a contributing factor.