Updated Analysis of Attrition through the 2014-15 Academic Year

In a nutshell, overall first-year attrition has increased each of the last four years, going from 5.81% to 7.04% over that period. This overall increase, however, results largely from increases in overall attrition among schools with median LSATs less than 150, as the overall attrition rates for law schools with medians LSATs of 150 or greater have generally decreased over this period. “Academic attrition” rates increase significantly as median LSAT decreases, while “other attrition” presents more of a mixed record.

Average Attrition Rates by Category of Schools Based on Median LSAT

When looking at this data, some things are worth noting. By contrast, “other attrition” presents more of a mixed record over time, but decreased in 2014-15 across all LSAT categories (perhaps because of the redefinition of “academic attrition” discussed above). 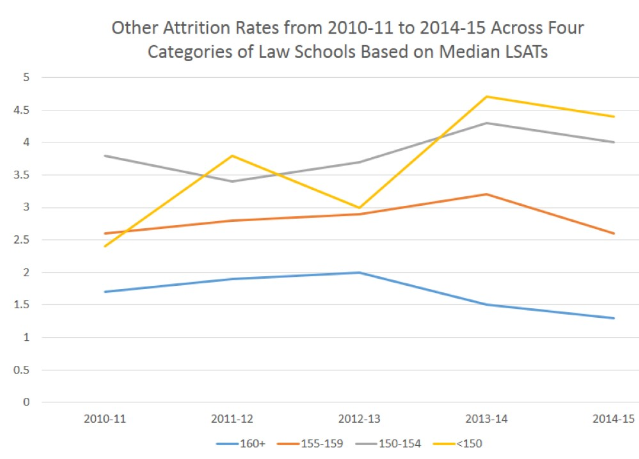 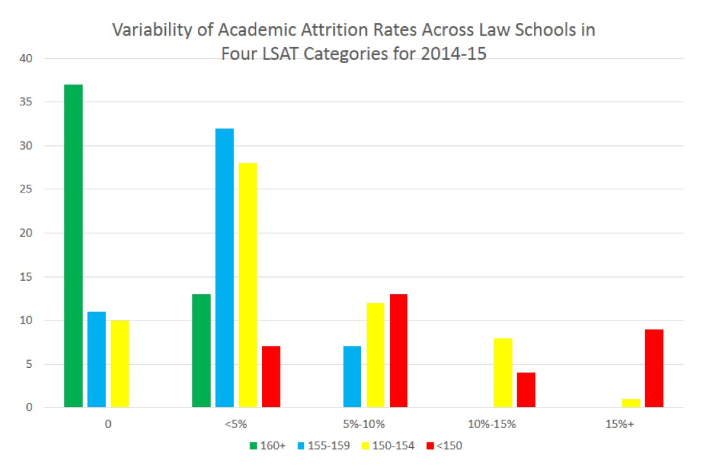 This phenomenon of increasing variability in attrition rates may merit further attention. For law schools with a similar 50th percentile LSAT and 25th percentile LSAT for their entering classes, what can explain a range of academic attrition from 2% to 20%. Does one school have a much higher standard for academic good standing and dismissal? Does one school have a much more robust academic support program? Have the professors at one school failed to adjust their grading to reflect a significantly different entering class profile among their students?

We also do not know for sure who is experiencing attrition within a given law school. The data presented here would suggest that students on the lower end of the distribution of a law school’s entering class profile are more likely to experience academic attrition than students on the higher end of the distribution, but presently that is not easily verified.

This is an appropriate time to pay closer attention to attrition data. The Standards Review Committee recently revisited Standard 501 and suggested to the Council that attrition rates might be used to inform the appropriateness of a law school’s admission policies. I hope to discuss the Standard Review Committee’s proposal at greater length in a subsequent blog posting. Given that the Standards Review Committee also recommended changes to Standard 316, the bar passage standard, trying to develop a better understanding of the relationship between academic attrition and bar passage (discussed above) also makes sense.

(I am grateful to Bernie Burk and Debby Merritt for comments on a earlier draft of this blog posting.)