In late December 2014, I posted a blog analyzing how the distribution of matriculants across LSAT categories had changed since 2010 based on the LSAC’s National Decision Profiles and on law school 50th percentile LSATs and 25th percentile LSATs across ranges of LSAT scores. With the LSAC’s recent release of the 2014-15 National Decision Profile and the ABA’s recent release of Standard 509 data, I am posting this blog to provide an update with the 2015 data.

At one level, this is a story that has already become well understood over the last year since my blog posting, with much discussion of the relationship between declining LSAT profiles and declining median MBE scores and bar passage rates. This 2015 information indicates that the decline in the LSAT profiles of matriculants and of law schools has continued, although with some moderation.

Given that the LSAT profiles of matriculants and of law schools for fall 2013, fall 2014 and fall 2015 are less robust than those for fall 2011 and fall 2012 (the classes that graduated in 2014 and 2015, respectively), one can anticipate that the declines in median MBE scaled scores and corresponding bar passage rates in 2014 and 2015 will continue in July 2016, 2017 and 2018 absent increases in attrition (I discussed attrition rates in a blog posting in October), significant improvement in academic support programs at law schools, or improved bar preparation efforts on the part of graduates.

Let’s start with the big picture. If you take the matriculants each year and break them into three broad LSAT categories – 160+, 150-159, and <150 – the following chart and graph show the changes in percentages of matriculants in each of these categories over the last six years.

Change in Percentage of Matriculants in LSAT Categories – 2010-2015

Change in Percentage of Matriculants in LSAT Categories – 2010-2015 (Visual) 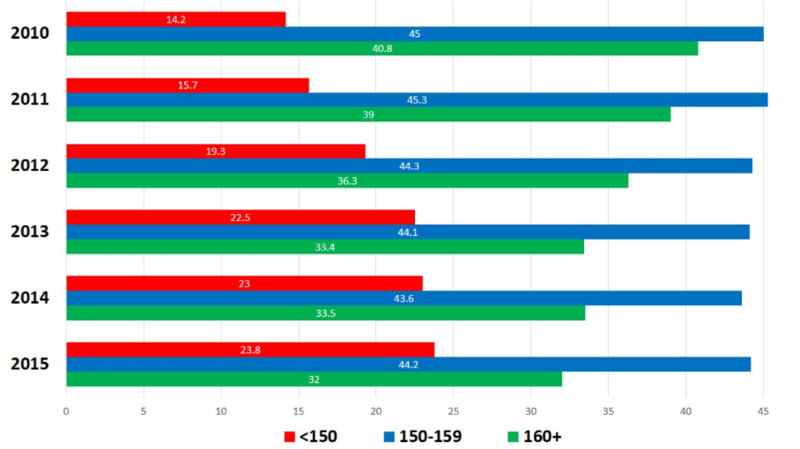 While I think this tells the story pretty clearly, for those interested in more detail, the following charts provide a more granular analysis.

Changes in LSAT Distributions of Matriculants – 2010-2013 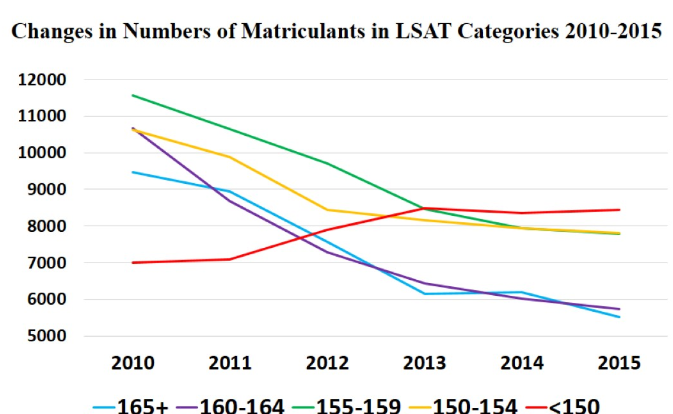 Changes in Percentage of Matriculants in LSAT Ranges – 2010-2015

Obviously, this change in the composition of the entering class has resulted in corresponding changes in the LSAT profiles of law schools. Based on the data law schools reported in their Standard 509 Reports from 2010 to 2015, the chart below lists the numbers of law schools reporting a 50th percentile LSAT within certain LSAT ranges. (This chart excludes law schools in Puerto Rico and provisionally-approved law schools.) 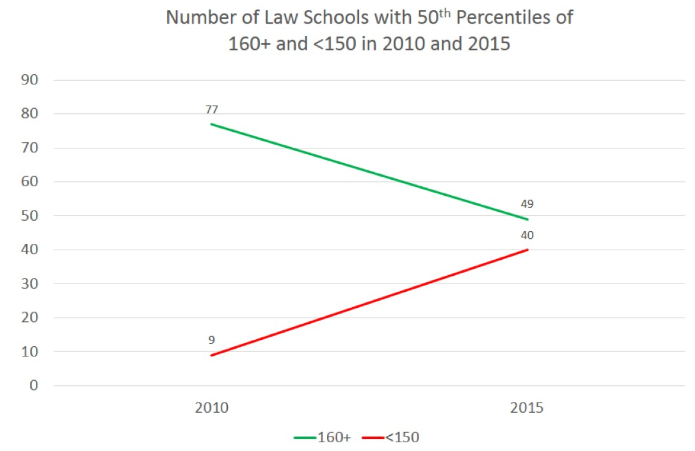 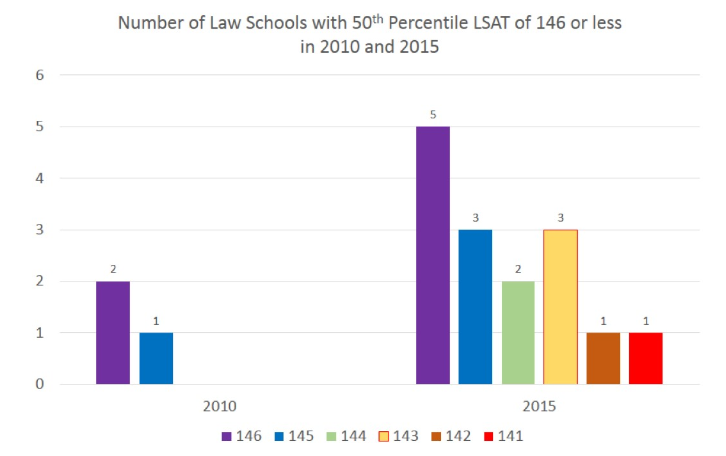 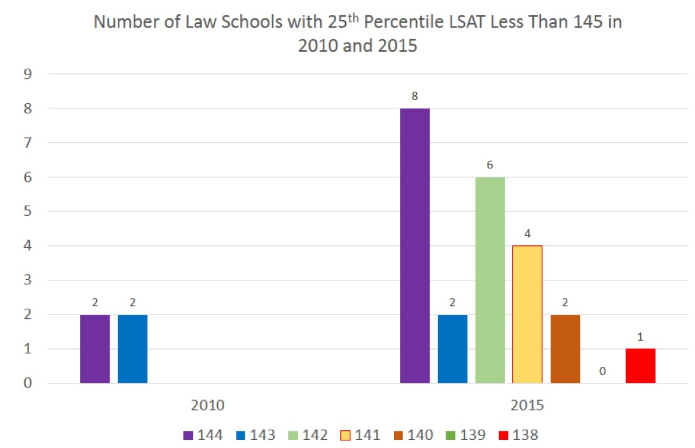 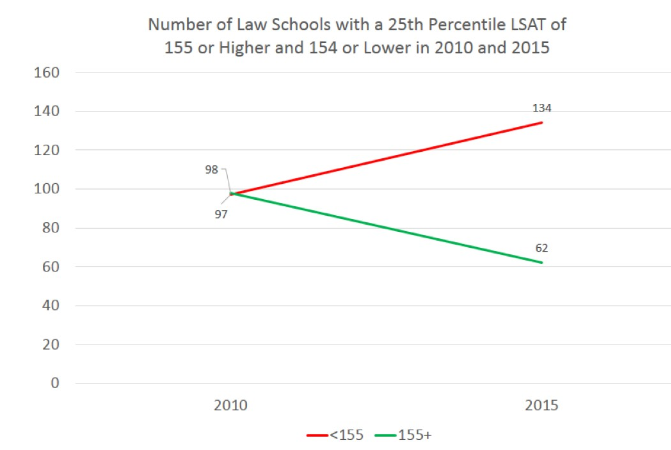 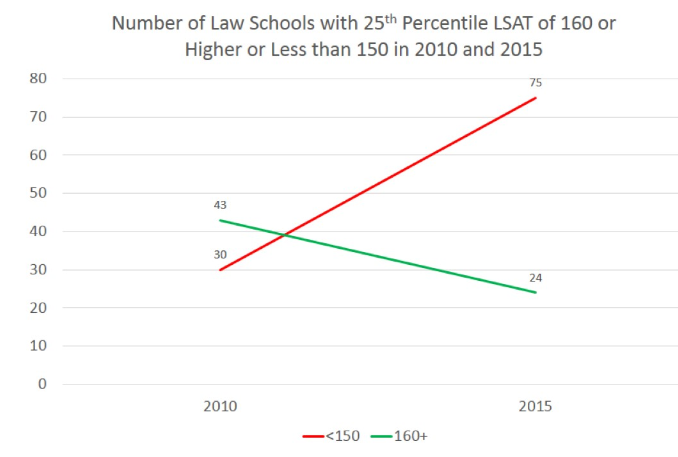 One other way of looking at this is just to see how the average first-year LSAT and UGPA profiles have changed over the last six years.

(Note that these are not weighted averages based on the number of matriculants at each school, but are simply averages across law schools.)

The LSAC’s most recent Current Volume Report (January 8, 2016) suggests that the pool of applicants to law schools is rebounding slightly in this current cycle. With 22,662 applicants at a point in the cycle at which 40% of applicants had been received last year, one can project an applicant pool of roughly 56,600. The “quality” of applicants also appears to be stronger, with double digit percentage increases in applicants to date in LSAT categories of 165 and higher. If these trends continue in the applicant pool for the current cycle, then the fall 2015 entering class may represent the “bottom” both in terms of the number of matriculants and in terms of the “quality” of the matriculants as measured by LSAT and UGPA. Of course, we won’t know for sure about that until next December when the 2016 Standard 509 Reports are published.

(I am grateful for the helpful comments of Scott Norberg on an earlier draft of this blog.)

If one has LSAT scores and bar passage on individual students (anonymized, of course) one could calculate a receiver operating characteristic (ROC) curve to examine a threshold LSAT score below which bar passage is unlikely. That number would have a sensitivity and specificity. One then could use that to judge the change over time (lagging of course because bar passage occurs after graduation) for law schools.