Family Tree of Some of the Great NYC Law Firms 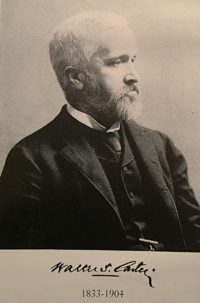 Holiday down time enabled me to dust off some gems in my home library.  Below is a fascinating family tree of the law firms associated with Walter S. Carter. This meticulously drawn chart is an appendix from Otto Koegel's 1954 book, Walter S. Carter, Collector of Young Masters.

Walter Carter was prominent a 19th century business lawyer who began his career in Milwaukee and eventually migrated to Chicago. After the Great Chicago Fire in 1871, Carter had so many lawsuits against bankrupt insurance companies that he moved to New York City and began hiring able young law graduates to help him with an enormous surplus of legal work.  Carter prided himself on his ability to identify, hire, and mentor exceptional legal talent.  Koegel's book is about "Carter's kids."

From 1888-1891, Carter's firm operated as Carter, Hughes & Cravath, with Paul Cravath and Charles Evan Hughes as the other two name partners.  Both Cravath and Hughes began their careers as associates in Carter's firm.  Cravath left in 1891 and by 1899 eventually landed at the firm that would become Cravath Swaine & Moore.  Other major NYC firms on the family tree include Milbank Tweed, Wilkie Farr & Gallagher, Cadwalder Wickersham & Taft, and Shearman & Sterling.  Carter's legacy firm split for the last time in 1937, creating what is now the present day Hughes Hubbard & Reed and Dwight, Royall, Harris, Koegal & Caskey (where Otto Koegel was a name partner).  The latter firm subsequently evolved into Rogers & Wells before being swallowed up by Magic Circle firm Clifford Chance in 2000. 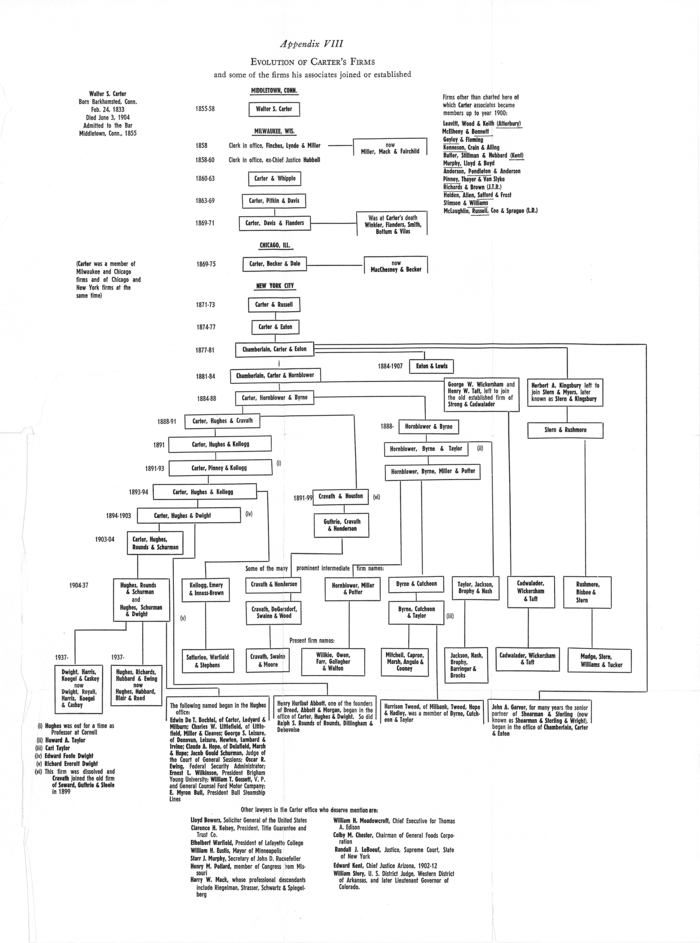 The relatively large number of branches in the tree may be attributable to disagreements over how to divide firm profits.  As observed by one former partner, Carter "picked his partners as Connie Mack picked ball players, usually dropping them after they demanded or earned as much as he did" (p. 91).

This coordination problem was eventually solved through the "Cravath system", which enabled partners to scale their firms to meet the needs of the nation's most sophisticated business clientele. In the Cravath firm history, credit is given to the training principles of Walter S. Carter.  With this system, which was designed to create a "better lawyer faster", the Cravath firm became a magnet for both clients and talented young lawyers. Rising profits presumably reduced acrimony over how they should be divided. This ethos gave rise to the modern large law firm.

Although it does not appear on the family tree by name, Carter began his career at the Milwaukee law firm that would eventually become Foley & Lardner (then known as Finches, Lynde & Miller).   He then went on to become a name partner in Carter, Davis & Flanders, which would later evolve into Michael Best & Friedrich.  Readers will no doubt notice other familiar connections on the Walter Carter family tree.