This is Part IV of a blog series that focuses on alumni surveys based on data for Northeastern Law alumni who graduated between 1971 and 2012 (n = 833, 21% response rate).  Prior posts covered data related to the pre-law (Part II) and law school (Part III) experience.  This final installment summarizes data on the careers of Northeastern alumni.

One of the most significant post-law school findings from the Northeastern alumni survey is the sheer breadth of careers.  Sure, we all know in a general sense that lawyers have very diverse careers, yet I found the sheer magnitude of that diversity both striking and surprising.

Below is a graphic that summarizes the percentage of Northeastern alumni who have worked in a particular practice settings,by decade of graduation.

% Alumni/ae who have worked in Practice Setting, by Decade of Graduation 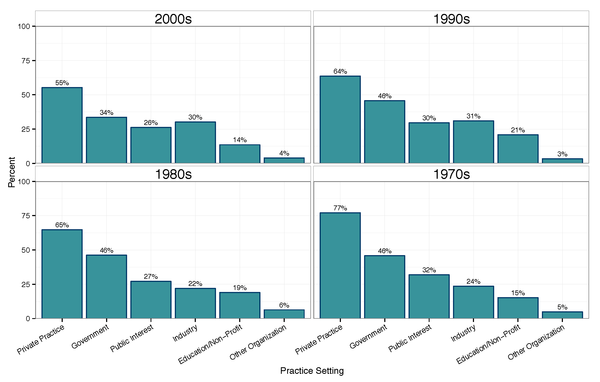 To interpret this graphic [click on to enlarge], it is important to understand the composition of the underlying data.  The survey question asks, “Describe your previous employment history starting with your most recent employer first.”  Some graduates have only one job to report -- the one they started after graduation; others have had many.  These jobs are then classified by practice setting and binned into the six categories shown in the above graphic.  Note that bars total well beyond 100%. Why?  Because alumni are changing not just jobs, but also practice settings—on average, at least once, but sometimes two, three, or even four times over the course of several decades.

The graphic above conveys several significant pieces of information:

General point.  Legal careers are extremely varied.  As it has tightened up, the entry level market has become an area of intense scrutiny, and rightly so because it affects early career lawyers and law school applicant volume.  In contrast, the chart above reflects the longer view. It suggests that very able, motivated people who attend law school go on to varied careers that no one could have predicted at the time of enrollment, including--most significantly--the entering student.  These generational cohorts are a versatile group that comprise a disproportionate number of leaders in industry, government, and the nonprofit world.  Law schools cannot take full credit for this; we admit people of enormous potential.  Yet many alumni tell me that their legal training and knowledge has given them an enormous leg up. One law grad who is now a successful business executive recently asked me, "Why is it JD-advantaged? Why not the advantage of the JD?"

Northeastern.  It is somewhat surprising that for Northeastern alumni who graduated during the 1970s, 80s, and 90s, 48% have worked in government.  That is a big number.  Northeastern’s mission and faculty emphasize public service. This same emphasis appears to be reflected in the careers of its graduates.

Changing Legal Ecosystem.  As noted in Posts II and III, because the Northeastern alumni survey spans multiple decades, it is possible that responses will be influenced by changes in the underlying legal economy. Stated simply, career opportunities and competition may have changed substantially between 1971 and 2012.  Such a pattern appears to be present here.  Specifically, 30% or more of graduates of the 1990s and 2000s have worked in private industry compared to 24% or less for those graduating in the 1970s and 80s.  This would be consistent with the incomplete absorption theory discussed in Part III.  See also Henderson, “Is the Legal Profession Showing its Age,” LWB, Oct 12, 2015.

Another significant finding that flows from the Northeastern alumni survey are the workplace experiences of practicing versus non-practicing lawyers.

Approximately 25% of respondents were not practicing lawyers but working, with no significant difference by decade cohort. The chart below compares these two groups based on 19 dimensions of workplace satisfaction. The question is drawn directly from the AJD Wave III:  “How satisfied are you with the following aspects of your current position?” 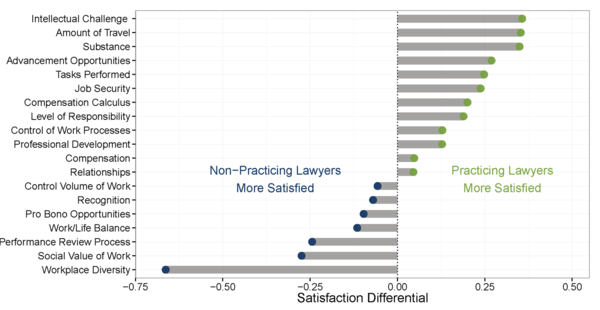 Can we generalize from these findings?

The results presented in this blog series reflect the collective experience of one law school’s alumni base – Northeastern.  There is no way to know if these results can be fairly generalized to the larger law graduate population, though there is a reasonable basis to believe that at least some of them can (e.g., the changing ecology of the legal job economy).  Yet, why speculate when the cost of collecting and analyzing the data is going down and the value of such applied research is going up?

Let me reiterate my suggestion from Part I that a consortium of law schools should begin this effort under the aegis of the American Bar Foundation (the prime architect of the AJD Project).  Northeastern has agreed to donate the survey and research tools we created as part of the Outcomes Assessment Project.   Such an initiative would enable researchers to draw stronger conclusions from these data, including potentially laudatory school-level effects that can help the rest of legal education.

I have been researching legal education for many years.  I have spent enough time with alumni at Indiana Law, Northeastern Law, and several other law schools to gain a strong impression that law school graduates are having, on balance, important, satisfying and high-impact careers.  Further, there is strong evidence that the legal industry is undergoing a significant structural change – that is much of what the Legal Whiteboard catalogs.  This structural change topic is of great interest to prospective students, lawyers, and the mainstream press.  Yet, these two themes--the careers of alumni and structural change--are related.

If legal education wants to influence the narrative on the value of the JD degree, it is far better to rely on data rather than rhetoric.  My sense is that data on our alumni will tell a rich, balanced story that will enable us to make better decisions for all stakeholders, including prospective law students. Further, if we don’t gather high quality facts, we can expect to get outflanked by a blogosphere and a mainstream press that are armed with little more than anecdotes.  To a large extent, that is already happening.  Now is the time to catch up.

This blog post series would not have been possible without the dedication and world-class expertise of my colleague, Evan Parker PhD, Director of Analytics at Lawyer Metrics.  Evan generated all the graphics for the Northeastern Alumni/ae Survey and was indispensable in the subsequent analysis. He is a highly talented applied statistician who specializes in data visualization.  Evan, thanks for you great work!

For other “Varied Career Path” findings, see the full Alumni/ae Survey Report at the OAP website.