Part II of this blog series reported that the top motivations to attend law school have remained the same for over four decades, at least for Northeastern University School of Law (NUSL).  Alumni reported the same underlying desire: to build a satisfying, intellectually challenging career where they could help individuals and improve society. This may be an image forged by pop culture and the idealism of youth, but it is also likely sincere.  It is the better side of our human nature.

Part II also showed two motivations to attend law school – the desire for “transferable skills” and “eventual financial security"-- that did appear to be shifting over time.  I suggested that these shifts are more likely about a changing ecosystem than a fundamental shift in the type of people applying to law school.

A similar ecological theme can be observed in the "During Law School" data. For example, since its reopening in 1968, Northeastern Law has required every graduate to complete four 11-week cooperative placements, usually in four different practice settings (e.g., government agency, public defender, large firm, public interest organization). As noted in Part I, students can be paid during co-op because it is a university rather than an ABA requirement. Cf. Karen Sloan, “The ABA says No to Paid Student Externships,” Nat’l L J, June 10, 2014.

One series of questions in the alumni survey specifically focused on the co-op experience, including co-op quality, what was learned, and whether they were paid.  The chart below reveals a steady, four-decade decline in the number of paid co-ops. 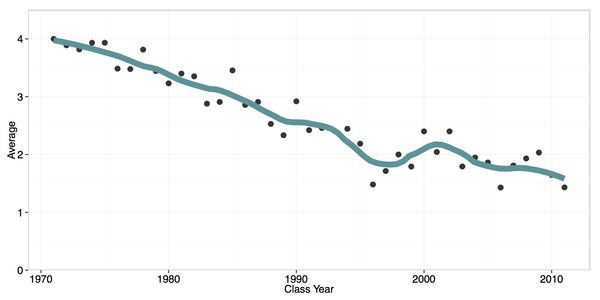 In the early 1970s, essentially all four co-ops were paid.  By the mid-80s, the average was down to three. Since the 2000s, the average has been two or fewer paid co-ops.

To my mind, the above trendline is compelling evidence of a steady, systemic shift in the legal ecosystem. I have written about this pattern in the past, suggesting that the rate of absorption of law grads into the licensed bar has been going down since the 1980s.  See Henderson, “Is the Legal Profession Showing its Age,” LWB, Oct 12, 2014 (noting that between 1980 and 2005, the average age of licensed lawyers increased from 39 to 49).

When I saw this downward trendline for the first time, I recalled my numerous interviews with NUSL alumni/ae from the 1970s. In describing their co-ops, they spoke of opportunities that were plentiful and varied. I often heard the refrain, “I paid for law school mostly with my income from co-op.”  Note that during the 1970s, graduating from college was much less prevalent than today.  Law firms were also growing, with 1970 becoming a major inflection point in the rise of the large law firm. See Galanter & Palay, Tournament of Lawyers (1991) (seminal text collecting and analyzing data on the growth of large firms).

The trendline on paid co-ops also made me rethink what I heard from NUSL co-op employers. The school has roughly 900 employers who regularly or semi-regularly participate in co-op.  I heard several regular employers express strong preferences for “third or fourth co-ops." Why?  Because third or fourth co-op students already had significant legal experience and needed less training to be valuable to the employer.  Training is costly. Even if the trainee is unpaid, the lawyer-as-teacher is expending their own valuable time.  If an employer is going to provide training, they need a way to recapture that investment. Unpaid labor for eleven weeks is one potential way; if the labor is already partially trained, that is even better.

Unfortunately, doing a great job for a co-op employer does not guarantee permanent employment or even a modest wage for temporary work.  The legal ecosystem does not reliably and consistently support those outcomes. Yet, 20, 30, or 40 years ago, the dynamics were far more favorable.

Obviously, in the year 2015, law grads are having a difficult time finding permanent, long-term professional employment (bar passage-required, JD-advantaged, or non-legal professional jobs).  The shortage of high-quality entry level jobs has given rise to criticisms that legal education needs more practical training.  The implicit assumption is that such a change will cure the underemployment problem.  I am skeptical that is true.

A more likely explanation for law grad underemployment is that the supply of trained lawyers is in excess of demand, partially due to demographics and partially due to the inability of most citizens to afford several hours of a lawyer's time.  This is a very difficult problem to fix. But misdiagnosing the problem does not help.

To the extent a legal employer is looking for a practice-ready law grad, Northeastern’s co-op model is as likely to deliver that outcome as anything else I have observed.  My in-depth review for how co-op affects professional development is written up in OAP Research Bulletin No. 3.  Ironically, what may be the best practice-ready model among ABA-accredited law schools is a 50-year old program that most critics may not know exists. But see Mike Stetz, “Best Schools for Practical Training,” Nat’l Jurist, March 2015 (ranking Northeastern No. 1).

The experiential education crowd will be heartened by another “During Law School” finding.  Among 833 alumni respondents, there were more than 3,200 co-ops identified by practice setting.  Alumni were asked to identify their most valuable co-op and provide a narrative as to why. 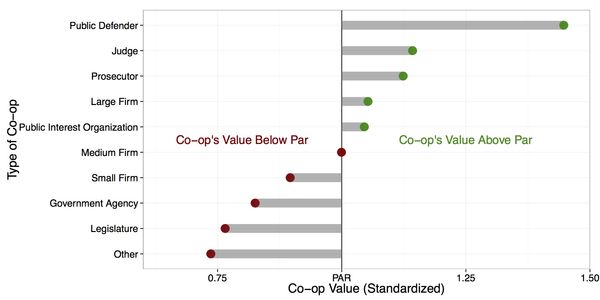 It is not hard to see the common theme.  Co-ops where students can observe lawyers in action – or better yet, get stand-up time in court – were rated as much more valuable.  The table below captures some of the underlying narrative comments.

For other “During Law School” findings, see the full Alumni/ae Survey Report at the OAP website.

Blog posts worth reading, Data on legal education, Data on the profession | Permalink