Building on the introduction (Part I) of this blog series, our alumni survey of Northeastern University School of Law yielded cross-sectional data that span graduates from 1971 to 2012.  Because of the large time span, some of the most interesting responses to questions tend to fall into two buckets:

In the portion of our analysis that looked at pre-law characteristics and motivations, our most striking findings tended to fall into bucket #1.

For example, below is a graphic summarizing responses to the question, “How important were the following goals in your decision to attend law school?” Responses are organized by decade of graduation.  They are ordered by most important to least important for respondents who graduated in 2000 or later.

Goals for Attending Law School, by Decade of Graduation 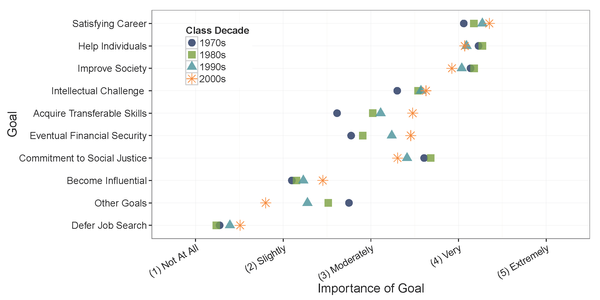 One of the most striking features is that the top three responses are essentially identical for all four age cohorts.  For each group, the desire to have a satisfying career, help individuals, and improve society were all, on average, very important in the decision to attend law school.

Although there are differences across age cohorts, there remains relatively clear clustering by decade of graduation. (Query: would this same pattern hold true at other law schools?  One of the advantages of pooling data across schools is the ability to isolate a self-selection effect that operates at the school level.)

Yet, some factors appear to be changing over time, such as the importance of transferable skills and eventual financial security.  With each decade cohort, respondents are rating these factors progressively more important to their decision to attend law schools. Likewise, “other goals” appear to be progressively less important.

These patterns (and others survey results I will report in Parts III and IV) suggest gradual changes in the knowledge worker ecosystem that require students to be more deliberate and focused in their decision to attend law school.  For example, costs of all of higher education are going up at the same time that the financial payoffs of traditional graduate and professional education are becoming less certain.  This is an ecological effect that is bound to have an influence on students and student decision making.  Although legal education would be part of this shift, the shift itself would not be unique to law.

This interpretation is consistent with our focus group discussions with Northeastern alumni.  This group queried whether the term “transferable skills” was even part of the lexicon when they were graduating from college.  Likewise, the group commented that the decision to attend law school during the 1970s and 1980s was not difficult because tuition was relatively low and jobs, including paid co-op jobs, were relatively plentiful. Although the legal market may be tighter and more complex than in earlier decades, the Northeastern alumni commented that the tradeoffs were changing for all knowledge workers.

For other “Before Law School” findings, see the full Alumni/ae Survey Report at the OAP website.