Lawyers may have a monopoly over the practice of law, but what exactly does the practice of law encompass?  In most common law jurisdictions, the term is not even defined.  And there's likely a self-interested reason why.  Ambiguity produces uncertainty, and uncertainty is a major source of business risk.

In the face of significant uncertainty, why would investors fund a business that encroaches on lawyers' most lucrative work when they'll have to hire a battalion of lawyers to defeat the entire universe of lawyers in front of a judge who used to be a practicing lawyer (and may be one again)? Many lawyers would get rich losing this case for you.

Well, ambiguity may not be enough to permanently fend off the invasion.  There is a controversy taking shape in India that may foreshadow the end of the lawyer guild.  Under India's Advocates Act, only lawyers can own a law firm. Likewise, only chartered accountants can audit companies.  But what about advisory services related to business?  That's a area of tremendous potential overlap between these two professions.

Globally, the Big 4 have been making inroads on lucrative cross-border deal work -- not enough to mortally threaten the major law firms, but enough to get their attention.  Yet, according to this story in the The Economics Times (the leading business paper in India), it's the elite law firms putting the hurt on the Big 4, poaching talent in some of the Big 4's most lucrative practice areas.  Here's how the Indian journalists tell it:

MUMBAI: Two months after the Delhi Bar Council sent a legal notice to top professional services firms EY, KPMG, PwC and Deloitte, the simmering hostility between the Big 4 and the legal fraternity is increasingly coming out in the open.

Earlier this month, Zia Mody's AZB & Partners [the Wachtell Lipton of India] scooped up six forensic experts from EY, a move that has been seen by industry players as part of growing competition between leading law firms and consultancies for business, encroaching into each other's traditional bastions. ...

[Zia Mody, the managing partner of AZB, commented,] "The compliance and investigation practice that we have formalised would help us in due diligence, Indian anti-corruption law investigations, asset-recovery cases, private equity-related post investment investigations and in some anti-trust investigation cases."

Top legal firms in the country are diversifying into forensic operations and undertaking commercial diligence and investigations for their clients.

This comes at a time when consultancies like EY and KPMG are bulking up their teams beyond the traditional forte of audit and tax practices to expand into advisory services. ...

"What law firms are doing is part of their evolution into full service providers," said Lalit Bhasin, president of the Society of Indian Law Firms, which in July filed a complaint against the Big 4 with the Bar Association of India, saying that they were practicing law without authorisation.

Side note on Lalit Bhasin -- he is the most prominent spokesperson for keeping in place the longstanding prohibition against foreign law firms operating inside India.  He is obviously not too keen on Big 4 accounting firms getting into his business.  The Times quotes a senior partner of a Big 4 firm, speaking on a condition of anonymity,

"The genesis of the problem is: lawyers are a close-knit community and if you don't belong to that club, you don't get lucrative work.  ... Now, the consultancies are increasingly getting their foot in the door, and doing the work at much lower price for which the lawyers would charge a bomb."

The story notes that the law firms and accounting firm are now competing to their mutual detriment, albeit the clients are unlikely complaining:

Consultancies and law firms are competing with each other in several other areas as well, and this is hurting the bottom lines of both sides as undercutting of fees has become rampant. "They (consultants) do an investment banking deal for a mere Rs 5 lakh [~$8000 US], for which a good law firm would charge around Rs 60 lakh [$90,000 US]," said the managing partner of a New Delhi-based big law firm.

Forensic is one of the most profitable business verticals for the Big 4. The total pie for forensics in India is estimated to be around .`850 crore [~$160 million] and is growing at 15-20 per cent year on year, industry experts said. Competition from lawyers, therefore, hurts the big auditors who among themselves control about 80 per cent of the market in India. Smaller rivals such as Alvarez & Marsal, FTI and Kroll [two US-based companies] control the rest.

Suffice it to say, the Big 4 aren't afraid to fight the elite bar in virtually any jurisdiction, as they have deep pockets and a large number of lawyers on their payroll, all of whom, we can be quite sure, are not engaged in the practice of law, whatever that term means.

This is the beginning of the end of an era, and that's a good thing.  We lawyers/legal professionals will reinvent ourselves by finding new ways to add value.  In fact, that is already happening.  In the long run, we'll feel richer for it. Below is an infographic from The Times story that summarizes the Indian lawyer-accountant standoff. 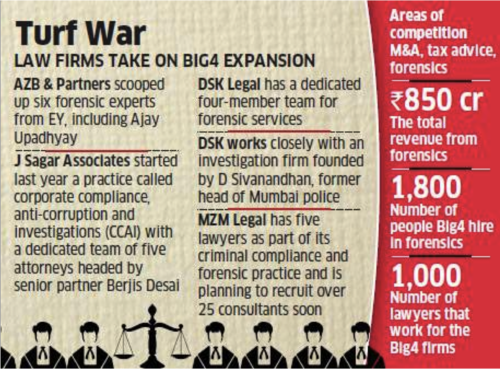