What's driving the demographic gap between BigLaw leaders and their CEO/GC clients? 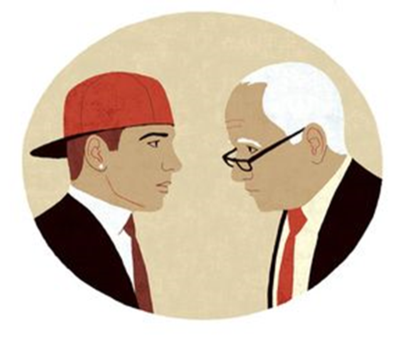 Las Vegas, NV.  The illustration to the left was just published in The American Lawyer.  It accompanied a story on how law firm leaders are significantly older than leaders in the large corporations they serve. See MP McQueen, The Generation Gap:  BigLaw's Aging Leaders, Aug 24, 2015.

At least for me, this is a jarring graphic because it conveys so much truth.  Today's Millennials are so underwhelmed with the BigLaw model.  They like the pay and the perks, as it enables them to live well in attractive large market cities.  They can also quickly pay off their law school debt.  But precious few of them are all in. Illustrator James Steinberg totally nailed it.

There are numerous reasons for the culture divide, but as shown in the chart below, the most obvious is a very large age gap between leaders and entry-level workers -- it tends to be a lot larger in BigLaw than almost anywhere else: 4% of AmLaw 100 leaders are Gen X compared to 33% of NASDAQ-traded companies. 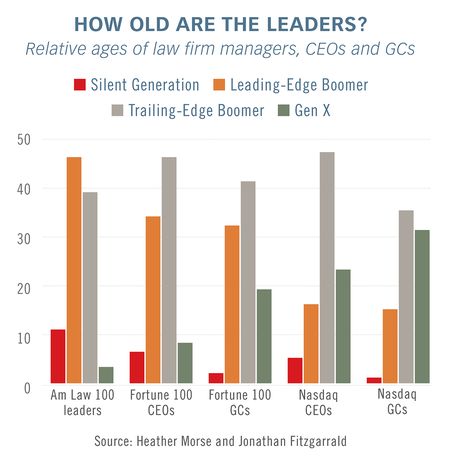 These data beg the question, why are large law firms so out-of-sync with the institutions they serve?

One reason is certainly the ownership structure.  Any Fortune 500 or NASDAQ-traded company that got this top-heavy in its senior management would be getting killed on its stock price.  Under the Rule 5.4 prohibition on nonlawyer investors, law firms are spared the anxiety of having analysts and short sellers constantly evaluating their business. Yet, the absence of a public market means that law firm owners and managers cannot fully monetize the enterprise value they create. So what's the effect?  Very little enterprise value gets created.  Instead, lawyer/owners  focus on maximizing this year's net distributable income.

It is important to not knock the BigLaw model too hard.  For about a century, it worked extremely well, as US law firms steadily grew with their clients.  Each unit of economic growth produced some larger unit increase in legal complexity, so demand for sophisticated legal services was a steady upward sloping line. By following a simple model -- hire more associates, promote some to partners, lease more office space, repeat -- equity partners in the AmLaw 100 became millionaires.

Today, BigLaw is getting grayer because the 100-year old gold factory is breaking down. Law firms' portion of corporate legal spending is no longer growing, as in-house lawyers, NewLaw managed services shops (United Lex, Axiom, Counsel on Call), and technology are all curbing demand for traditional law firm services.   The best economic play for 55- or 60-year old equity partner is to ride out the existing model with the dwindling but still substantial number of Baby Boomer senior in-house lawyers who are themselves not too anxious to change.

This is not the story equity partners tell themselves; it's the logic that underlies the inertial path.  It's where we end up when we are no longer deeply invested in the places we work.  It's become a job.  I am not judging here; I'm describing what I have observed through hundreds of conversations with large firm partners.

The result of this dynamic is that a large proportion of BigLaw--but certainly not all of it--is just tinkering at the margins of change. A law firm can become more cost-effective for clients, at least in the short to medium term, by reducing reliance on associates.  Associates are expensive and are, by definition, getting paid to learn.  For the last 15-20 years, firms have shifted their leverage model to counsel, staff attorneys and nonequity partners, where (a) there is little to no training, (b) the margins are higher, and (c) the clients can't complain about inefficient associates. This is the Diamond Model, which substantially cuts out the entry-level lawyer.  See The Diamond Law Firm: A New Model or the Pyramid Unraveling? (Dec. 2013); Sea Change in the Legal Market, NALP Bulletin, Aug. 2013. 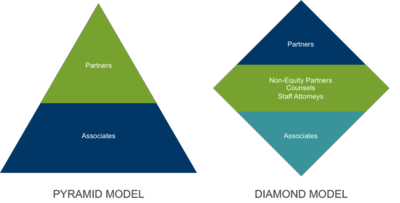 Unlike the original Pyramid Model, invented by Paul Cravath circa 1910, the Diamond Model is not a carefully conceived business strategy. Rather, it's a way to maximize this year's and next year's net distributable income without making difficult strategic tradeoffs. Yet, in the longer term, which is no longer too far off, the Diamond Model is a disaster.  The few associates who make it into large firms are grateful for the high pay and the training.  But very few if any are impressed with the business model.  Among Millennial lawyers, in-house is the new brass ring.

Law firms are filled with brilliant people. Why are they going down this road?  Three interrelated reasons:

That said, I am not counting BigLaw out.  I am writing this blog post from the International Legal Technology Association (ILTA) conference in Las Vegas.  From far away, it is all too easy to treat BigLaw as a monolith--it's not.  At ILTA, professionals from several of the most innovative law firms are willing to pop the hood and share what they doing.  See Ahead of the Curve: Three Big Innovators in BigLaw, Aug. 25, 2014. Suffice it to say, some firms are several years into strategies that have the potential to take market share from peer firms.  Further, the innovation teams inside these firms are having the time of their professional lives because the work is so collaborative and creative--the antithesis of billable hour work.  What is also clear is that many competitors just can't muster the leadership nerve to make similar investments.

In the years to come, some BigLaw firms are going to pull away from the rest, becoming a magnet for talent and then clients.  Younger lawyers are going to thrive there.  Another portion of BigLaw is going to gradually fade away.

Excellent reporting of the issues. Given that Boomers are tinkering with change and GenX and Millennials want change now, the next 5-10 years in legal are sure to be transformative.

Great post. This is a difficult and awkward conversation to have, but it is important to the business of law. If we do not recognize and anticipate for the changes in our law firms, and amongst our clients, we will continue to see work go in-house, to competitive law firms, or out the door with the next generation rainmaker. Jonathan is right, the next 5-10 years will be transformative.

Very helpful insight Bill. We all tend to say the partnership structure, risk-aversion as a trait of attorneys, and the lack of a real balance sheet are the main contributors to the challenges of change. Thank you

Excellent analysis. However, I think disruption will come from new law firms rather than big law firms, for all the reasons you point to, but also because disruption typically comes from new companies built with new strategies from the beginning (think Uber vs taxi companies, Airbnb vs hotel companies, Amazon vs Barnes, Tesla vs Big Three, etc.). This is why my firm, Rimon Law, is growing so quickly along with Axiom and other firms built specifically with these changes in mind.