What is more important for lawyers: where you go to law school or what you learned? (Part I)

The Economist reports a very interesting analysis from Payscale.  The questions being asked are pretty simple: If you want to generate earnings that justify the time and cost of an undergraduate education, what should you study and where should you enroll?

Lots of people have strong opinions on this set of questions, but Payscale has the data to answer them empirically. It turns out that at the undergraduates level, course of study is much more important than the prestige of the college or university you attend.  The hard evidence is shown below. 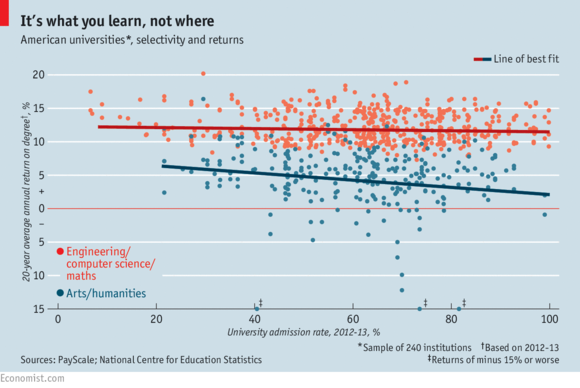 For those working in law or thinking about attending law school, a natural question to ask is whether the legal industry is closer to the blue dot (art & humanities) or red dot pattern (engineering/CS/math).  A second, related question whether the future of law is more blue or more red.

This a two-part blog post.  Part I tries to answer the first question, starting with a careful analysis of the undergraduate chart, which provides a valuable frame of reference that can be discussed more dispassionately (at least among lawyers and law students) than an analysis that questions the value of law school prestige and hierarchy.

Part II, which I will post on Wednesday, explores the second, future-oriented question.  I will tip my hand now and say that the future of law will be less blue (arts & humanity) and more red (math/CS/engineering).  Within the legal industry, there will be winners and losers; but from the perspective of broader society, this change is a very good thing.

In the Payscale chart above, the y-axis (vertical) is 20-year annualized returns from college fees paid.  The x-axis is selectivity, running from under 10 percent to near open admissions.

The Payscale chart is a very good example of how data visualization can be used to communicate both core facts and useful nuance.  Here, the lede is unmistakable:  the red dots (engineering/CS/math) are overwhelming higher on the ROI scale than the blue dots (arts & humanities).  Sure, there are exceptions to this rule, but they don't occur very often. (Observe how rarely a blue dot is above the red fit-line.) This suggests it would be very foolish to get a blue degree and expect a red paycheck unless you have very good information (or skills or talent) that others lack.

The chart conveys another important piece of information -- the red fit-line is flat.  This means that for engineering/CS/math majors, prestige has not been very relevant to their eventual earnings.  I'll add a nuance here that some empirically savvy readers are bound to point out:  It is possible (indeed likely) that fees are higher at more selective schools. So if MIT costs twice as much as a public polytech, and both yield 12% over 20 years, one might wish they had gone to MIT.   Still, the flat trendline is surprising.  As a general matter, lower ranked schools are not dramatically cheaper than higher ranked schools, and many public schools are highly selective.  The flat red trendline suggests that there are (or were, remember these are historical data) many bargains out there.  If one is trying to maximize financial returns, the goal is to find a school that will, in the future, be well above the red fit-line (and avoid those below).

The flat red fit-line is also surprising because college selectivity is almost certainly highly correlated with ACT or SAT scores, which our society often views as measures of general intelligence. Yet, there we have it -- a flat trendline. Four years of education seem to be more relevant than a standardized test score taken during high school.  That is heartening at many levels.

A third interesting trend -- the blue fit-line is sloped downward.  This suggests that in the arts & humanities, selectivity/prestige does have a financial payoff.  I don't think this will surprise many readers, albeit the prestige payoff is not very large. To use a simple metaphor, if you attend a more selective college or university to get your arts or humanity degree, you are likely to have a better house in the arts & humanities neighborhood.  But on average, you won't be able to afford the same neighborhood as the engineers, computer scientists, and math majors.

Moving on to law, if we want to examine the relationship between earnings and law school attended, the best available evidence is probably the After the JD Study (AJD), which is large, representative sample of law graduates who took and passed the bar in 2000.

Data from AJD Wave 3 suggests that the financial returns are relatively strong for all law school graduates -- ten years out and graduates of Tier 4 schools have median earnings of $100,000 per year. As shown in chart below, this is akin to shifting the blue dots up into the red territory. 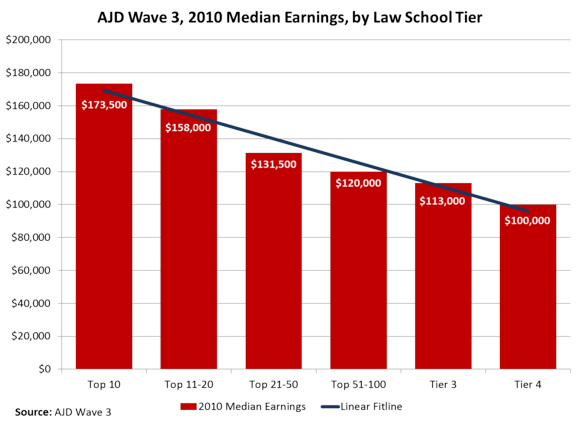 The downward sloping fit-line remains, but that doesn't seem to matter very much to happiness. Other AJD data shows that regardless of tier of graduating school, AJD respondents show relatively high and uniform satisfaction with (a) the decision to become a lawyer, and (b) the value of the law degree as an investment. By 2010, 48% of respondents had no debt; only 5.1% had more than $100K in educational debt remaining.

This is all good news.  But is it reasonable to extrapolate forward and assume the past is a fairly accurate barometer of the present and the future?

One way to address that question is to ascertain what has changed since 2000.  As noted earlier, the AJD sample was composed of law graduates who passed the bar in the year 2000. Figures published by NALP and the ABA show that the percentage of full-time bar passage required jobs has dropped significantly over the last 13+ years -- from 77.3% for the class of 2000 to 57% for the class of 2013. That is a huge delta. 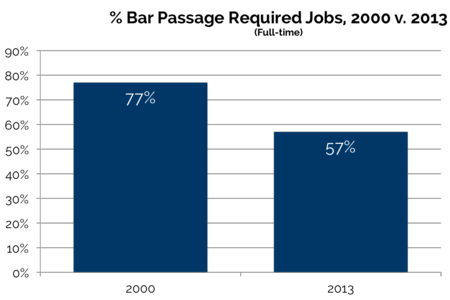 One of the reasons why law school applicants have plummeted is that the career path from JD graduates has become murky.  And that is a good place to start Part II.

Very interesting post. Excited to read the next part. Thanks for sharing!

Any man who can ask, about statistical figures, "But is it reasonable to extrapolate forward and assume the past is a fairly accurate barometer of the present and the future?" displays himself ipso facto to be an idiot. What is this guy, a college sophomore? Is he writing to college sophomores? Jeez. Embarrassingly dumb.

John, When faced with the stress and uncertainty of unwanted change, people — including smart people — tend to want to see the world through rose-colored glasses. Psychologists call this motivated reasoning. What many in the legal industry want to see (understandably) is a market that goes back to their view of normal. In the face of this tendency, a subtle reminder to not overgeneralized from the past does not, to my mind, make me an idiot.