The Market for Law School Applicants -- A Milestone to Remember

In early 2013, Michael Moffitt, the dean of Oregon Law, was interviewed by the New York Times about the tumult affecting law schools. Moffitt, who is a very thoughtful guy, reponded, "I feel like I am living a business school case study.”

I think the analogy to the business school case study is a good one.  In the nearly two years since that story was published, the market for law school applicants has actually gotten worse. 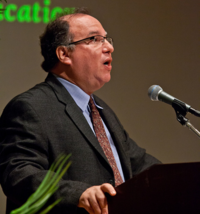 "It's insane," said Rodriguez, "We’re in hand-to-hand combat with other schools." The trendlines are indeed terrible.  Year-over-year, LSAT test-taker volume is down another 8.7%.  See Organ, LWB, Nov 11, 2014.  So we can expect the situation to get worse, at least in the near term.

I applaud Dan Rodriguez for this leadership instincts.  He is being transparent and honest.  Several years ago the leadership of the AALS went to great lengths to avoid engagement with the media. Dan has gone the opposite direction, inviting the press into our living room and kitchen.

Want to know what leadership and judgment look like?  It looks like Dan's interview with Elizabeth Olson.  Dan's words did not solve anyone's problem, but his honesty and candor made it more likely that we help ourselves.  Because it's Northwestern, and Dan is president of the AALS (something the story did not mention but most of us know), and this was reported by Elizabeth Olson in the New York Times, the substance and tenor of discussions within law school faculties is bound to shift, at least slightly and in the direction favoring change.

What is the de facto plan at most law schools these days?  Universities are not going to backstop law schools indefinitely. I think the sign below is not far off the mark.

We are indeed living through a business school case study, which is both bad and good.   At many schools -- likely well more than half --  hard choices need to be made to ensure survival.  (And for the record, virtually all schools, regardless of rank, are feeling uncomfortable levels of heat.)   A law school needs cash to pay its expenses.  But it also needs faculty and curricula to attract students. The deeper a law school cuts, the less attractive it becomes to students.  Likewise, pervasive steep discounts on tuition reflect a classic collective action problem. Some schools may eventually close, but a huge proportion of survivors are burning through their financial reserves.

Open admissions, which might pay the bills today, will eventually force the ABA and DOE to do something neither really want to do -- aggressively regulate legal education.  This is not a game that is likely to produce many winners.  Rather than letting this play out, individual law schools would be much better off pursuing a realistic strategic plan that can actually move the market.

The positive side of the business school case study is that a few legal academics are finding their voice and learning -- for the first time in several generations -- how to lead.  Necessity is a wonderful tutor.  Law is not an industry on the decline -- far from it.  The only thing on the decline is the archetypal artisan lawyer that law schools are geared to churn out.  Indeed, back in 2013 when Dean Moffitt commented about living through a business school case study, he was not referencing imminent failure.   Sure, Moffitt did not like the hand he was being dealt, but as the 2013 article showed, his school was proving to be remarkably resourceful in adapting.

The good news resides on the other side of a successful change effort.  The process of change is painful, yet the effects of change can be transformative and make people truly grateful for the pain that made it all possible.  In our case, for the first time in nearly a century, what we teach, and how we teach it, is actually going matter.  If we believe serious publications like The Economist, employers in law, business, and government need creative problem solvers who are excellent communicators, adept at learning new skills, and comfortable collaborating accross multiple disciplines -- this is, in fact, a meaningful subset of the growing JD-Advantage job market.

In the years to come, employers will become more aggressive looking for the most reliable sources of talent, in part because law schools are going to seek out preferred-provider relationships with high quality employers.  Hiring based on school prestige is a remarkably ineffective way to build a world-class workforce -- Google discovered this empirically.

From an employer perspective, the best bet is likely to be three years of specialized training, ideally where applicants are admitted based on motivation, aptitude, and past accomplishments. The LSAT/UGPA grid method misses this by a wide margin. After that, the design and content of curricula are going to matter.  It is amazing how much motivated students can learn and grow in three years. And remarkably, legal educators control the quality of the soil.  It brings to mind that seemingly trite Spiderman cliche about great power.

For those of us working in legal education, the next several years could be the best of times or the worst of times.  We get to decide.  Yesterday's article in the Times made it a little more likely that we actually have the difficult conversations needed to get to the other side.

Professor Ray Campbell has written an excellent article on what law schools need to do. The End of Law Schools at http://papers.ssrn.com/sol3/papers.cfm?abstract_id=2530051 .

"the market for law school applicants has actually gotten worse."

For whom? Not the students, I'll wager.

As a proportion of the GDP, it is. And the number of jobs in the legal field is flat, for all practical purposes.

IIRC, a court threw out some law grads' lawsuit on grounds that law schools are part of the elites, and therefore above the law - sorry, that 0L's are 'sophisticated consumers'.

And now that some are acting like it, life will be tougher for law school deans.

"But it also needs faculty and curricula to attract students. The deeper a law school cuts, the less attractive it becomes to students."

The notion that cutting tuition by reducing faculty to historical levels makes a school less attractive to students must be a comforting one to administrators (who have no desire to reduce faculty), and to professors (who understandably want their numbers to grow forever), but it's unfounded.