Apropos of not much at all, I noticed when printing my New York Times crossword puzzle this morning that its constructor was the same Michael S. Maurer who is the named benefactor of Bill Henderson's school.

I knew Mickey Maurer when I was in Indianapolis and he ran the Indiana Economic Development office.  Stand up guy.  He told me that he wasn't very good at doing crosswords, even though he was a regular contributor to the New York Times.

N.B.:  Will Shortz is also an Indiana U. grad.  I don't know if that's a coincidence.

What Might Have Contributed to an Historic Year-Over-Year Decline In the MBE Mean Scaled Score?

The National Conference of Bar Examiners (NCBE) has taken the position that the historic drop in the MBE Mean Scaled Score of 2.8 points between the July 2013 administration of the bar exam (144.3) and the July 2014 administration of the bar exam (141.5) is solely attributable to a decline in the quality of those taking a bar exam this July.  Specifically, in a letter to law school deans, the NCBE stated that:  “Beyond checking and rechecking our equating, we have looked at other indicators to challenge the results.  All point to the fact that the group that sat in July 2014 was less able than the group that sat in July 2013.”

I am not persuaded.

(Neither is Brooklyn Law School Dean Nicholas Allard, who has responded by calling the letter “offensive” and by asking for a “thorough investigation of the administration and scoring of the July 2014 exam.”  Nor is Derek Muller, who earlier today posted a blog suggesting that the LSAT profile of the class of 2014 did not portend the sharp drop in MBE scores.)

I can’t claim to know how the NCBE does its scaled scoring, so for purposes of this analysis, I will take the NCBE at its word that it has “double-checked” all of its calculations and found that there are no errors in its scoring.

If we accept the premise that there are no scoring issues, then the historic decline in the MBE Mean Scaled Score is attributable either to a “less able” group taking the MBE in July 2014 or to issues associated with the administration of the exam or to some combination of the two.

What about “first-time takers”?  That group actually consists of two subgroups as well – those literally taking the exam for the first time and those who passed an exam in one jurisdiction and are taking the exam for the “first-time” in another jurisdiction.  Again, I am not sure the NCBE has any basis to suggest that those who passed a bar exam and are taking a bar exam in another jurisdiction in 2014 were a less capable bunch than a comparable group that was taking a second bar exam in 2013.

The answer to that is no.

To understand this better, let’s look at how the trends in student quality have related to changes in the MBE Mean Scaled Score over the last decade.

While the relatively simplistic calculations described above would provide some basis for anticipating declines in bar passage rates by 2016, they would not explain what is going on this year without more refinement.

In his blog posting earlier today, Derek Muller attempts to look at the strength of each class by calculating "projected MBE" scores drawing on an article from Susan Case and then comparing those to the actual MBE scores, showing some close relationship over time (until this year). I come to a similar conclusion using a different set of calculations of the "strength" of the graduating classes over the last several years based on the LSAT distribution profile of the matriculating classes three years earlier.

To develop this more refined analysis of the strength of the graduating classes over the last nine years, I used the LSAC’s National Decisions Profiles to identify the distribution of matriculants in ten five-point LSAT ranges – descending from 175-180 down to 130-134.  To estimate the “strength” of the respective entering classes, I applied a prediction of bar passage rates by LSAT scores to each five point grouping and came up with a “weighted average” bar passage prediction for each class.

(In his article, Unpacking the Bar:  Of Cut Scores, Competence and Crucibles, Professor Gary Rosin of the South Texas College of Law developed a statistical model for predicting bar passage rates for different LSAT scores.  I used his bar passage prediction chart to assess the “relative strength” of each entering class from 2001 through 2013.

Please note that for the purposes of classifying the relative strength of each class of matriculants, the precise accuracy of the bar passage predictions is less important than the fact of differential anticipated performance across groupings which allows for comparisons of relative strength over time.)

Thus, having generated these “weighted average” bar passage projections for each entering class starting with the class that began legal education in the fall of 2002 (class of 2005), we can compare these with the MBE Mean Scaled Score for each July in which a class graduated, particularly looking at the relationship between the change in relative strength and the change in the corresponding MBE Mean Scaled Score.  Those two lines are plotted below for the period from 2005-2012.  (To approximate the MBE Mean Scaled Score for graphing purposes, the strength of each graduating class is calculated by multiplying the weighted average predicted bar passage percentage, which has ranged from .801 to .826, times 175.) 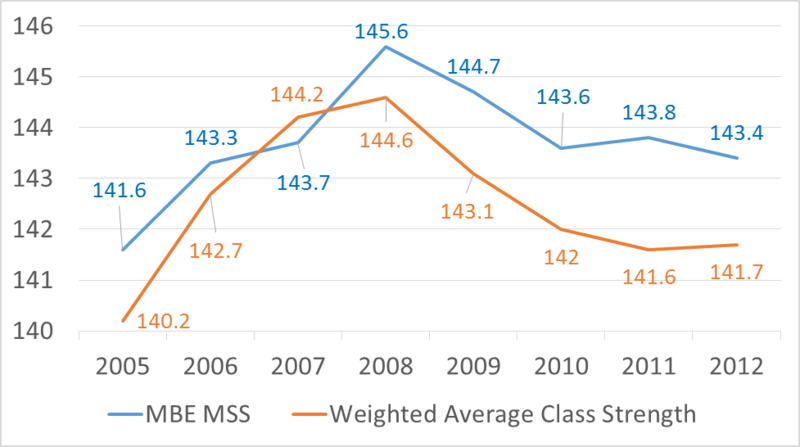 How does this help us understand what has happened in 2014 relative to 2013?  The decrease in quality of the class of 2014 relative to the class of 2013 using the “Weighted Average Bar Passage Projection” methodology above reflects a change from 145.1 to 144.2 – a drop of 0.9 (less than the year over year changes in 2009 and 2010).  Accordingly, one might anticipate a decline in MBE Mean Scaled Scores, but probably a decline slightly smaller than the declines experienced in 2009 and 2010 – declines of .9 and 1.1 point, respectively.

In these ExamSoft jurisdictions, I can only imagine that some number of those taking the MBE on the second day of the exam were doing so with much less sleep and much less focus than might have been the case if there had not been issues with uploading the essay portion of the exam the night before.  If this resulted in “underperformance” on the MBE of just 1%-2% (perhaps missing two to four additional questions out of 200), this might have been enough to trigger a larger than expected decline in the MBE Mean Scaled Score.

Nonetheless, the experience of one state, Iowa, casts significant doubt on the NCBE “story.”

Unfortunately for the NCBE, there is no basis to claim that the Drake and Iowa graduates were “less able” in 2014 than in 2013 as there was no statistical difference in the LSAT profile of their entering classes in 2010 and in 2011 (the classes of 2013 and 2014, respectively).  In both years, Iowa had a profile of 164/161/158.  In both years, Drake had a profile of 158/156/153.  This would seem to make it harder to argue that those in Iowa who sat in July 2014 were “less able” than those who sat in 2013, yet their performance was significantly poorer, contributing to the largest decline in bar passage rate in Iowa in over a decade.  The only difference between 2013 and 2014 for graduates of Drake and Iowa taking the bar exam for the first time in Iowa is that the group that sat in July 2014 had to deal with the ExamSoft debacle while the group that sat in July 2013 did not.

When the NCBE issues its annual report on 2014 sometime next year, we will be able to do a longitudinal analysis on a jurisdiction by jurisdiction basis to see whether jurisdictions which used ExamSoft had higher rates of anomalous results regarding year-over-year changes in bar passage rates for first-time takers.  When the NCBE announces next fall the MBE Mean Scaled Score for July 2015, we will be able to assess whether the group that sits for the bar exam in July 2015 (which is even more demonstrably “less able” than the class of 2014 using the weighted average bar passage prediction outlined above), generates another historic decline or whether it “outperforms” its indicators by perhaps performing in a manner comparable to the class of 2014 (suggesting that something odd happened with the class of 2014).

It remains to be seen whether law school deans and others will have the patience to wait until 2015 to analyze all of the compiled data regarding bar passage in July 2014 across all jurisdictions.  In the meantime, there is likely to be a significant disagreement over bar pass data and how it should be interpreted.