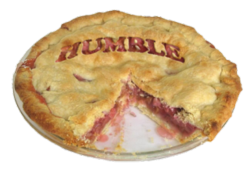 Every few months, whether I like it or not, I get served a slice of humble pie.   I thought those tiring of the steady stream of law school critiques might find this slice particularly tasty, as someone else (me) is ingesting it.

Over the last few years, I have begun reading books on management and leadership.  My interest in this topic is driven partly by my belief that law schools will be tooling up in this area in the years to come; and partly by a desire to learn about, and acquire, what I hope to teach.

The finest resource I have found on this topic is Management and Leadership: A Group of Letters to an Industrial Organization.  This book was originally published in 1948 by Carl Braun, a prominent industrialist of the early and mid-20th century.  Braun wrote this book, and several others, for the benefit of his managers at C.F. Braun & Co., which was an engineering company that designed and built many of the nation's oil refineries.  I was drawn to Braun because his company was such a spectacular and enduring success.

The success, however, not not merely financial.  What made C.F. Braun so successful for so long was Braun's relentless drive to maximize the potential of every person in his organization.

Now let's think about that -- reaping large profits by putting your people first.  For Braun, this was not a abstraction.  It was, in fact, the company's track record over a period of several decades.  In 1989, 35 years after Carl Braun's death, C.F. Braun & Co. was sold to what is now Kellogg Brown & Root (KBR).  And today, people who worked there are still reminiscing over the positive impact the company had on their lives and the lives of their families.  If you think I am exaggerating, check out the C.F. Braun Alumni Group on LinkedIn.

I have read Management and Leadership several times.  Without exception, each time I put the book down I feel both challenged and inspired.  Well, this last time, I read the following passages in one sitting -- and suffice to say, the contrast hit be pretty hard.  You be the judge.

Below in a section titled "The Doers Must Teach," Braun implores his managers to accept their role as teachers, as our nation's schools, including colleges and universities, lack the practical orientation of modern industry.

Our field of endeavor, industry, unlike medicine for instance, is one of those fields in which the teachers are not the doers. Our teachers, whether in grade-school, high school, or college, seldom have had industrial experience. Few have had even slight contact with industry. And fewer still have current contacts. Not understanding industry, they too often judge it by its worst members, and so develop for it an active disrespect.

The result is that, with rare exceptions, teachers do not find out from industry what industry needs from them. Nor do they seek from industry the teaching-methods that the better industrialists have developed.  The gap is enormous between the abstract teachings of our schools and the concrete needs of industrial man. It is this gap that we industrial leaders must fill. We must fill in what's missing. And we must make the whole a living growing thing.

Well, as I am reading the above passage, my mind is quickly drawing a parallel between Braun and numerous incisive and trenchant critiques of legal education.  See, e.g., Legal Education's Ninety-Five Theses, Legal Whiteboard, Feb 1, 2012; Harry Edwards, The Growing Disjunction Between Legal Education and the Legal Profession, 91 Mich L Rev 34 (1992).   Yes, I thought to myself, these authors, like Braun, really know what they are talking about.

But that was not what Braun had in mind.  About 20 pages later, Braun focuses on legal education and the case system as a beacon that will lead us to a better way.

The law schools have the right idea. They used to bore law students by droning at them from Blackstone - that encyclopedic treatise on law theory. But now they teach from concrete cases - and they've done it for eighty years. The student studies adjudicated cases - cases that are real, typical, modern. From these cases, with the help of his teacher, the student builds up the guiding rules.

This is the right method. Let it be our method. Let's shake ourselves free of the horrible methods we have been brought up on in our schools.  Let's have no dogmatic rules in our teaching.  Let's have no silly and artificial examples that nobody ever uses. Let's be sure that in all our teaching we start with concrete cases -- cases that are real, that are applicable to our purposes, and that preferably are within the practical experience of our learner.

Of course, in 1947, the year before Braun would extol law schools to his audience of engineers, the influential legal realist, Jerome Frank, published an incisive critique that called for the near complete overthrow of the 80-year tradition. See Frank, A Plea for Lawyer-Schools, 56 Yale L J 1301 (1947).

Alas, we humans often find the deepest faults with what is close and intimate, and greatest virtue  with what is mythical and far away.  How often a sense of accurate proportion eludes us.   After several years traveling the country discussing legal education reform, I have gradually concluded that if I want to maximize my influence on change, I need to build and encourage, not criticize and debate.