General counsel from large legal departments are becoming increasingly skeptical of the value provided by leading brand-name law firms, such as the AmLaw 20 or the Magic Circle.  That is the conclusion of some compelling research just posted on the HBR Blog Network, the online idea forum run by Harvard Business Review.

AdvanceLaw is a good example of what Richard Susskind calls a "closed legal community."  See Tomorrow's Lawyers, chapter 5.  Some essential background on AdvanceLaw is discussed below. But I am sure readers want to see the data first. The reported research was based on responses from 88 general counsel, who answered two questions:

Below are the results posted on the HBR Blog Network: 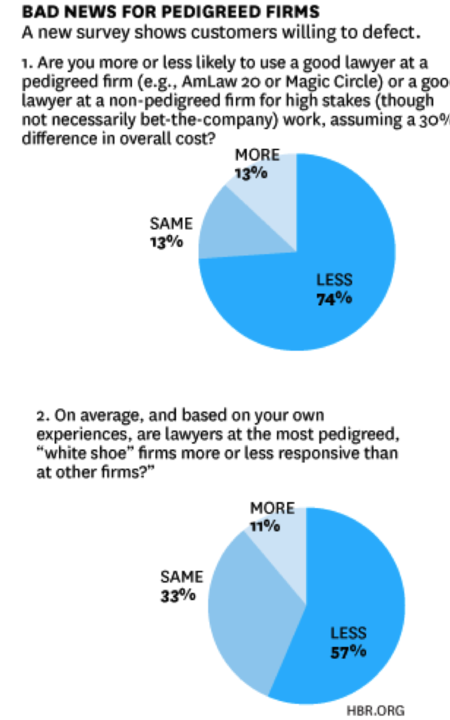 Readers are probably wondering, "Who is AdvanceLaw and why are they asking these types of questions?"  I have some intel on this topic.

AdvanceLaw was formed four years ago by Firoz Dattu, a Harvard-trained lawyer who spent time in BigLaw (Paul Weiss).  Firoz eventually found his way to the Corporate Executive Board, which a publicly traded company (NYSE: CEB) that specializes in subscription-based research organized by industry and function.  CEB uses the aggregated research for value-add services such as benchmarking and best practices.

Because they specialize in factgathering for strategy and management,  CEB has a long history of employees leaving to start niche businesses.  That is what happened here.  Firoz helped launch, and ultimately ran, the General Counsel Roundtable (GCR), which is a CEB functional group that cuts across industries.  I have been to a GCR meeting (it is invitation-only for outsiders).  Suffice to say that a persistent theme of conversation was controlling legal costs without compromising quality.  A seemingly tall order, right?

Firoz started AdvanceLaw because of perceptions by general counsel that they were being overcharged and underserved by large firms in the major markets.  Any GC who has reviewed data from TyMetrix would quickly draw the same conclusion, as a large firm lawyer with 20-years experience in, say, Minneapolis often has a lower billing rate than a second-year at a mega-firm in NYC.  AdvanceLaw has positioned itself as a trusted advisor that can provide reliable guidance in shopping for value outside the big brand-name firms.

So how does this service work?  As noted earlier, AdvanceLaw is an example of a closed legal community.   To get into the AdvanceLaw network, prospective law firms are run through a rigorous RFP process that evaluates things like expertise, innovation, quality, compensation systems, and track record on diversity.

AdvanceLaw also has a globalization overlay, which has been created with GC assistance.    For instance, in Argentina and India, AdvanceLaw works with quite prominent firms who also exhibit efficiency. In the UK and Canada, the firms are substantial players, but are slightly less pedigreed than the Magic Circle and Seven Sisters, respectively.

So let's boil down AdvanceLaw's business model into its simplest terms: It gathers information so they legal departments don't pay excessive prices for the CYA (cover-your-ass) benefits of hiring high-prestige Big Law.

CYA still matters, of course.  But through AdvanceLaw, pedigree is being given a more accurate valuation.  A likely large second-order effect of AdvanceLaw is the acceleration of AFAs through AdvanceLaw firms, as feedback (on quality) and publicity (to drive volume) is what is needed to make that transition.

Susskind is right.  Closed legal communities are going to be major disruptors in the legal marketplace.