Last month, The National Jurist published an article I wrote that was a tribute to Leonard ("Len") Fromm, Dean of Students at Indiana Law from 1982 to 2012.  Len passed away in February. The editors at The National Jurist supplied the official title, which I thought was spot on: "What Every Law Student Needs to Excel as an Attorney: Introducing the Fromm Six." [original PDF]  I am republishing the essay here because I want as many people as possible to know the story and contribution of this truly great man. [posted by Bill Henderson] 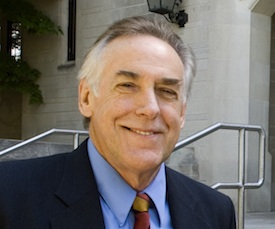 One of the greatest people in legal education that you have never heard of is a man named Leonard Fromm.   Fromm served as Dean of Students at Indiana University Maurer School of Law from 1982 to 2012.  On February 2, 2013, Dean Fromm passed away after a relatively short battle with cancer.

I want to discuss an innovation that Dean Fromm contributed to legal education—a contribution that, I predict, will only grow over time.  This innovation is a competency model for law students called the Fromm Six.  But first, let me supply the essential background.

After several years in counseling and adult education, Dean Fromm joined the law school in 1982 to preside over matters of student affairs.  Over the course of three decades he quietly became the heart and soul of the Maurer School of Law.  Dean Fromm was typically the first person that new students met during orientation—the law school administrator who completed character and fitness applications for state bar authorities and the voice that called out their names at commencement (with an amazing, booming tenor).   During the three years in between, Dean Fromm counseled students through virtually every human problem imaginable.  His most difficult work was done in his office with his door closed and all his electronic devices turned off.  It was private work that was not likely to produce much fanfare.

During his tenure at Indiana Law, Dean Fromm’s title was expanded to include Alumni Affairs.   The change did not expand his duties in any significant way—Len was already working 70 hours a week in a job he loved. Rather, the change reflected the fact that Indiana Law alumni associated (and often credited) Dean Fromm with the deepest and most abiding lessons of law school—overcoming self-doubt; confronting self-destructive behavior; recognizing the importance of relationships; finding the courage to try something again after disappointing failure; or discovering the ability to see the world through the eyes of one’s adversary or opponent.

One of the cumulative benefits of Dean Fromm’s job was the ability to track the full arc of lawyers’ careers, from the tentative awkwardness of the 1L year, to involvement in the school’s extracurricular events and social scene, to coping strategies for students not at the top of their class, and the myriad, unexpected turns in our graduates’ professional careers.  During his tenure he interacted with nearly 6,000 students and stayed in contact with a staggering number of them after graduation.  Invariably, he saw the connection between law school and a student’s subsequent success and happiness later in life (noting, in his wise way, that professional success and happiness are not necessarily the same thing).

In 2008, I started collaborating with Len on a project to construct a law school competency model.  Our first iteration was a list of 23 success factors  which we constructed with the help of industrial & organizational (IO) psychologists.  Although valid as a matter of social science, the list was too long and complex to gain traction with students.  In 2010, the faculty who taught Indiana Law’s 1L Legal Professions class got together and reduced the list of competencies to 15.  Once again, we found it was too long and complex to execute in the classroom.

During the summer of 2011, as we were debriefing the challenges of another year in our competency-based 1L Legal Professions course, Dean Fromm said, “I have an idea.” A short time later, he circulated a list of six competencies that were appropriate to 1Ls and foundational to their future growth as professionals.   Finally (or At last), we now had a working tool!  Moreover, none of the professors teaching the Legal Professions course, including me, wanted to revise a single word—a veritable miracle in legal academia.

Upon reviewing the list I kidded Len that the new IU competency model should be called “The Fromm Six”, which was a play on the famous “Big Five” personality model that forms the bedrock of scientific personality testing. (Len had a Masters degree in Counseling Psychology as well as a law degree.)  He just laughed.  But the “Fromm Six” had a lot of resonance with the rest of us so the label stuck.

In May 2012, Dean Fromm retired from his position as Dean of Students and Alumni Affairs.  At age 70 he was preparing to join us in teaching the 1L Legal Professions course.  This was to be in addition to his usual Negotiations class, where he was a master.  Instead, within a few weeks of retirement, Len was diagnosed with a virulent cancer that never let go.

None of us can make sense of Len’s death as it abruptly ended a life of complete, unselfish service to a large community of students, faculty and graduates.  But, as best I can, I am inclined to pay tribute to his life.  And to my mind, there is no greater tribute than to publish and publicize the Fromm Six so that another generation of lawyers can benefit from his wisdom, grace and kindness.

Here are the Fromm Six:

Self-Awareness – Having a highly developed sense of self. Being self‐aware means knowing your values, goals, likes, dislikes, needs, drives, strengths and weaknesses, and their effect on your behavior.  Possessing this competence means knowing accurately which emotions you are feeling and how to manage them toward effective performance and a healthy balance in your life. If self‐aware, you also will have a sense of perspective about yourself, seeking and learning from feedback and constructive criticism from others.

Active Listening – The ability to fully comprehend information presented by others through careful monitoring of words spoken, voice inflections, para‐linguistic statements, and non‐verbal cues. Although that seems obvious , the number of lawyers and law students who are poor listeners suggests the need for better development of this skill.  It requires intense concentration and discipline. Smart technology devices have developed a very quick mode of “listening” to others. Preoccupation with those devices makes it very challenging to give proper weight and attention to face‐to‐face interactions. Exhibiting weak listening skills with your colleagues/classmates/clients might also mean that they will not get to the point of telling you what they really want to say.  Thus, you miss the whole import of what the message was to be.

Questioning – The art and skill of knowing when and how to ask for information. Questions can be of various types, each type having different goals. Inquiries can be broad or narrow, non‐leading to leading. They can follow a direct funnel or an inverted funnel approach.   A questioner can probe to follow up primary questions and to remedy inadequate responses.  Probes can range from encouraging more discussion, to asking for elaboration on a point, to even being silent. Developing this skill also requires controlling one’s own need to talk and control the conversation.

Empathy– Sensing and perceiving what others are feeling, being able to see their perspective, and cultivating a rapport and connection. To do the latter effectively, you must communicate that understanding back to the other person by articulating accurately their feelings. They then will know that you have listened accurately, that you understand, and that you care. Basic trust and respect can then ensue.

Communicating/Presenting –The ability to assertively present compelling arguments respectfully and sell one’s ideas to others.  It also means knowing how to speak clearly and with a style that promotes accurate and complete listening.  As a professional, communicating means persuading and influencing effectively in a situation without damaging the potential relationship.  Being able to express strong feelings and emotions appropriately in a manner that does not derail the communication is also important.

Resilience –The ability to deal with difficult situations calmly and cope effectively with stress; to be capable of bouncing back from or adjusting to challenges and change; to be able to learn from your failures, rejections, feedback and criticism, as well as disappointments beyond your control. Being resilient and stress hardy also implies an optimistic and positive outlook, one that enables you to absorb the impact of the event, recover within a reasonable amount of time, and to incorporate relevant lessons from the event.