I was at the ReInvent Law Silicon Valley event last week.  Following up on Jerry's thorough remarks, I can honestly say it was unlike any legal education and lawyer conference I have ever attended (the only thing close is Law Without Walls).  There is a new guard in the legal academy taking shape, and it is led -- truly led -- by Dan Katz and Renee Knake at Michigan State.

Admittedly, Dan and Renee lean heavily toward my bias.  Most of us law professors talk.  Dan and Renee, in contrast, are doers.  Shortly after becoming assistant professors, they each moved quickly from ideas to action to actually having the audacity to attempt to build new and relevant institutions. Moreover, they both did it untenured--Dan is only in his second year of teaching and Renee just cleared the tenure hurdle earlier this year.  They did all of this without a net. To my mind, they are winning the "Game of Life."  If other junior faculty follow their example, the legal academy is going to truly change.  And right now, that is what we need.

One of my favorite Paul Lippe quotes is this, "In hindsight, the new solutions are all going to look obvious."  ReInvent Law was 40 speakers tied together by a common interest in experimentation. Were all the ideas good?  If history is any guide, and the criteria is moving from concept to implementation to financial and institutional sustainability, the answer is surely no. But it was invigorating to be in a room of doers who are all willing to risk failure.  That is the courage and leadership we need right now.  To me, it looked obvious that we need a place like ReInvent Law where insurgent ideas can be expressed with enthusiasm, even if only a handful or fewer will transform the legal landscape.

I was fortunate to be one of the presenters.  Dan Katz was kind enough to take my picture when I gave my Ted-style talk (all the talks were Ted-style or "Ignite").  If you zoom-in on me, I look ridiculous.  I am no showman.  But you have to admit that the lighting is pretty spectacular.  The green screen, by the way, is the running twitter feed, an idea that I can assure you was not stolen from the ABA or the AALS. 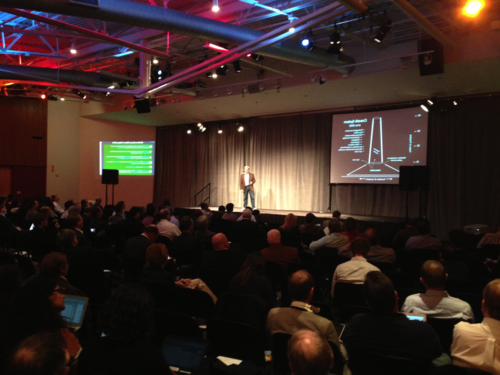 Amidst all these "revolutionary" ideas, I think my presentation was probably the most conservative.  My central claim is that 100 years ago, as the nation struggled to find enough specialized lawyers to deal with the rise of the industrial and administrative state, some brilliant lawyers in cities throughout the U.S. created a "clockworks" approach to lawyer development.  These clockworks filled the enormous skills and knowledge gap.  Firms like Cravath, Swaine & Moore, through their "Cravath System," finished what legal educators started.  (I use the Cravath System as my exemplar because its elegant business logic was written out so meticulously in the firm's 3-volume history.)

The whole purpose of the clockworks was to create a "better lawyer faster."  This is a quote from volume II.  The company I co-founded, Lawyer Metrics, incorporated it into our trademark -- the value promise is that compelling.  See the slides below.

A Clockworks Approach to Lawyer Development from William Henderson

Here is the Slideshare description:

The original Cravath System circa 1920 demonstrated the power of a "clockworks" approach to lawyer development. The system was a meticulously designed and mechanized way to create specialized lawyers who could service the needs of America's rapidly growing industrial and financial enterprises -- lawyers who were in perennial short supply because the requisite skill set could only be learned by doing. The System endured for a century because it solved the specialized lawyer shortage by making every stakeholder better off -- junior lawyers (received training), partner-owners (large, stable profits), and clients (world class service and value).

Today's legal employers and legal educators would benefit by revisiting this system's powerful business logic. The clockworks approach to lawyer development still works. The only difference is that the specifications for a great lawyer have changed. Like the original Cravath System, a new clockworks would create a "better lawyer faster."