How Do Law Professors Learn About the Intersection of Law and Technology? 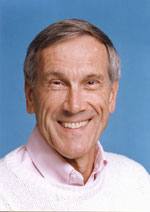 Here is my best guess:  We show up at the intersection and we listen to lawyers, judges, regulators and vendors talk about the issues of the day.  Alas, this is not original to me.  It is the "soak and poke" research method pioneered by the renowned political scientist, Richard Fenno (photo to right).  See Fenno, U.S. House Members in Their Constituencies: An Exploration, 71 Am. Polit. Sci. Rev. 883, 884 (1977) (seminal article that describes the "soaking and poking" methodology as one that "befits the earliest stages of exploration and mapping") (HT to my PhD colleague Jay Krishnan, who explained this all to me).

Earlier this month, there was a major conference in Washington, DC on developments in the world of electronic discovery -- the very thing that has added enormous cost and complexity to civil litigation in this country, impacting access to justice, and producing a restructuring of how corporations buy and manage a significant portion of their legal services. If there is a burgeoning legal technology revolution, the frontline is the world of e-discovery.  Lawyers and clients can no longer cope with the rapidly growing volume of electronically stored information (ESI).  Going forward, technology and nonlegal expertise are a permanent part of the legal industry.

This major conference was organized by the Advanced eDiscovery Institute, which is part of Georgetown Law's CLE operations.  According to its website, the conference (now it its ninth year) has "gained a reputation among judges, practitioners, and vendors as the leading eDiscovery conference of its kind in the United States."  Notice that "law professors" and "legal educators" are entirely absence from this description.

If you leaf through the lengthy roster of speakers and organizers, you'll see:

This is a very serious crowd.  Yet, I located only one full-time law professor in the mix:  John Carroll, who is Dean of the Cumberland School of Law at Samford University.  Yet, even Dean Carroll is not your typical legal academic.  He is a Vietnam veteran, a 1974 graduate of Cumberland Law, a former federal magistrate judge, and a current member of the Sedona Conference. Kudos to Dean Carroll, whom I suspect knows quite a bit about cutting edge issues in eDiscovery. But where is the next generation of legal academics soaking up all this valuable institutional knowledge?

Nearly 10 years ago I showed up at the Indiana Solo & Small Firm Conference.  I was there to gain some basic insight for a course I was putting together called "The Law Firm as a Business Organization."  As the organizers will tell you, a law professor had never before ventured into their conference. What was their reaction?  A very kind, "It's about time!"  I was immediately drafted onto the organizing committee and in subsequent years conducted two major surveys for the ISBA Solo & Small Firm Section.  To this day, the lawyers I met at that first Solo & Small Firm Conference remain an important part of my professional network.  Ironically, several years ago the small firm crowd was issuing a clarion call on the importance of law and technology -- for them, it was all about survival.

Now law and technology is on nearly everyone's radar.   New tools and work processes are opening the door to better, faster, and cheaper legal solutions -- solutions that bear little resemblance to the artisan method of lawyering taught in US law schools.  Unfortunately, there are no classes to turn any of us into experts--the practicing bar itself is struggling to comprehend the implications of the new world we are entering. During a paradigm shift, the job of academics is going to messy and chaotic.  At this juncture, we have to educate ourselves by showing up, talking to people, and observing. Cf. Susan Helper, Economists and Field Research: "You Can Learn A Lot Just by Watching", 90 Am. Econ. Rev. 228 (2000).  It is time to get to work.

Interested in a primer on law and technology?  Consider the NYC LegalTech, which runs from Jan 29-31.  Early bird registration ends Dec 31, 2012.  I will definitely be at ReInvent Law Silicon Valley 2013, which is March 8 at the Computer History Museum.  Other high quality options -- I am told by people more knowledgable than me-- are the ABA Techshow, which runs from April 4-6 in Chicago this year, and the International Legal Technology Association annual conference, which runs August 18-22 in Las Vegas this year.  I would love to get together with other law professors who will be attending these important industry meetings.

CALI help an online series of webinars on Topics in Digital Law Practice with the EXPLICIT goal of getting law faculty to see how practice has changed.

All of the sessions were recorded and are available at ... http://tdlp.classcaster.net/about-cali-topics-in-digital-law-practice/

We will be doing another on in the Spring of 2013 and I hope to get some good introductory coverage on ediscovery - which - as you pointed out - is a HUGE deal in modern law practice and should be covered more extensively in law school courses.

Getting away from academic conferences is a good start, but I doubt attending a trade show, designed to sell the latest and greatest tech solutions to Biglaw, is going to make an expert out of anyone. In fact, it might serve to skew the understanding of the uninitiated to buy into the hype, without the capacity to distinguish between the good, the bad and the silly.

John, thanks for the link. Scott, a trade show in one dimension of the industry. This technology did not exist ten years ago -- indeed, most of the vendors did on exist. Now it is a massive conference of which BigLaw is only a subset. If we are persistent, we can sort out the froth from the substance. I do agree that we have to go to things beyond trade shows. Bh.

Bill, thanks for this post. I've posted my thoughts about the resistance to learning about technology at http://jimmilles.com/2012/12/30/how-do-law-professors-remain-ignorant-about-the-intersection-of-law-and-technology/

Thanks for the post Bill. There are indeed a lot of vendors, trade shows, and educational seminars on this topic and much like social media, more people are beginning to embrace it and are becoming curious.

I am an eDiscovery vendor, so I too am constantly researching new innovations within the industry. I have learned the most by actually sitting through some of the web demonstrations. I would love to show you my product for informational purposes (not a sales pitch) if you're ever interested in seeing it! Your feedback about my product would be valuable to me.

I will also be attending Legal Tech NY this year, stop by my booth and say hello if you have time!

I agree with Bill that state solo and small firm conferences are a great place for law professors to both teach and get info on emerging technology in the practice. I presented on ethics and technology at the Missouri Bar's very first SSF conference (when most people there didn't even have a computer on their desk or know what a URL was) because I had expertise in professional responsibility. I returned intermittently over the years, but in earnest eleven years ago and had the same experience as Bill. We now take students to the conference every year as part of a class on SSF practice. And I always go to some of the tech sessions, because they invariably bring amazing people to the conference who are at the cutting edge. It's all there for us, we just need to take advantage of it.