How to Increase Your Law School's Academic Reputation

Law schools care deeply about their academic reputation.  If this were not true, my Indiana Law mailbox would not be stuffed full with glossy brochures sharing the news of faculty publications, impressive new hires, areas of concentration, and sundry distinguished speaker series, etc.

Because of the timing of these mailings – I got nearly 100 in Sept and October—I am guessing that the senders hoped to influence the annual U.S. News & World Report Academic Reputation survey.  Cf. Michael Sauder & Wendy Espeland, Fear of Falling: The Effects of U.S. News & World Report Rankings on U.S. Law Schools 1 (Oct 2007) (reporting "increases in marketing expenditures aimed toward raising reputation scores in the USN survey"). But does it work?  A recent study by Larry Cunningham (St. Johns Law) suggests that the effect is, at best, decimal dust. 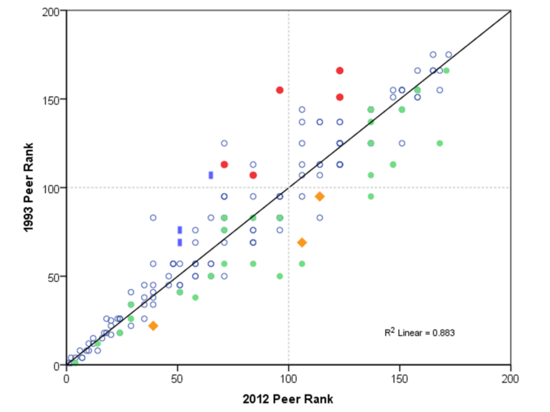 The primary takeaway from the above scatterplot is that 2012 USN Academic Reputation is overwhelmingly a function of 1993 USN Academic Reputation.   Over 88% of the variation is explained by a school's starting point 20 years earlier.  Part of this lock-in effect may be lateral mobility.  That is, there are perks at higher ranked schools: they tend to pay more; the teaching loads are lighter; and the prestige is greater, etc. So school-level reputations rarely change, just the work addresses of the most productive scholars.  This is, perhaps, the most charitable way to explain the enormous stickiness of USN Academic Reputation.

That said, the scatterplot does not show a perfect correlation; slightly less than 12% of the variation is still in play to be explained by influences other than starting position.  A small handful of schools have made progress over these 20 years (these are the schools above the regression line), and a handful have fallen backwards (those below the line).

The Red circles, Blue rectangles, Orange diamonds, and Green circles represent four law school-level attributes.  The Reds have been big gainers in reputation, and so have the Blues. In contrast, the Oranges have all experienced big declines; and as as a group, so have the Greens.  When the attributes of the Red, Blue, Orange, and Green Schools are factored into the regression, all four are statistically signficant (Red, p =.000; Blue, p = .001; Orange, p = .012; Green, p = .000) and the explained variation increases 4% to 92.3%.  As far as linear models goes, this is quite an impressive result.

Before you look below the fold for answers, any guesses on what is driving the Red and Blue successes and Orange and Green setbacks?

Red circles are the five law schools that, over the last 20 years, have changed university affiliations and thereby changed their names.  These include:

So, USN Academic Reputation is likely influenced by the halo of a stronger university brand.  But this strategy is only open to a handful of independent law schools and those affiliated with a weak, financially struggling central universities.  So it is not generalizable as a strategy for increasing Academic Reputation.  Sorry to get your hopes up.

Well, what about the Blue retangles?

This one is a little counterintuitive.  I identifed three research-oriented law schools where, compared to the rest of the legal academy, conservatives have fared well during faculty hiring: George Mason, San Diego, and Pepperdine. Why these three? (If there are other law schools that have tried to build a strong conservative faculty brand, they have escaped my attention.)

But wait, fellow academics vote in the USN Academic Reputation survey, and supposedly we are an overwhelmingly liberal.  So why did these three conservative school fare so well?  This could be combination of three factors:

If moving on USN Academic Reputation is really important to a faculty, the lesson here is, "make a hard, high-profile right turn, and wait a decade."  That said, there are probably not enough spoils to go around for more than a handful of conservative law schools to use this strategy.

Name changes and conversativism are the factors associated with an increases in USN Academic Reputation.  What are negative factors?

The three orange triangles are three schools that gained unprecedented notoriety based on either a rankings scandal or extensive negative treatment in the New York Times.

The last factor is perhaps the most troubling.

There are 31 schools in the so-called Rust Belt, which I define as western PA and NY, Ohio, Michigan, Indiana, Illinois and Wisconsin. These 31 law schools experienced an average USN Academic Reputation decline of 13 spots.  And note, this includes the MSU Law +59 miracle jump and several elite law schools such as Northwestern (-2), Chicago (-3), and Michigan (-3) that are in the highly sticky T14 range.  So, to get a -13 average, we need some really big negative numbers from many law schools.

Why is this happening?  Well, the economic center of gravity of the US economy has been moving to the south and west for several decades now.  Although this affects the Northeast just like it does the Midwest, the Northeast has become an agglomeration of "advanced producer services", which includes bankers, consultants, accountants, and lawyers.  See Henderson & Alderson, The Changing Economic Geography of Law U.S. Law Firms (2008) (documenting a large increase in corporate law lawyers in the Northeastern Mid-Atlantic region and the relative hollowing out of corporate lawyers in the Rust Belt, with the exception of Chicago).

The implication is that regional law schools in the Rust Belt are more likely to be serving a stagnant regional economy.  This is not particularly attractive to prospective law students.  See Henderson & Morriss, Student Quality as Measures by LSAT Scores: Migration Patterns in the U.S. News Rankings Era, 81 Ind. L. J. 163 (2006) (documenting that students will trade down in USN ranking to attend a school in large and growing corporate legal market).  So this is likely the "echo chamber" effect playing itself out in conformity with larger systemic trends affecting the legal market.  See Stake, supra.

Some might argue that the declines are the result of academic snobbery against the flyover states.  If so, this prejudice must have arisen with avengence during the last 20 years.  Or, less plausibly, some might argue that these schools have had a harder time recruiting or retaining sufficiently talented, productive faculty.  Remember, this is the same survey that boosted Detroit College of Law a record +59 jump when it made the 90-mile move to East Lansing ... which is very much in the Rust Belt.  That +59 point jump probably had a lot more to do with a Big Ten brand than the production of high quality faculty scholarship.

After we consider starting position, the Jeff Stake "echo chamber" effect, scandals, name changes, conservative branding, and basic measure error inherent in any survey work, how much unexplained variation can we really assign to the true changes in the academic quality of law schools?  To my mind, virtually nothing. 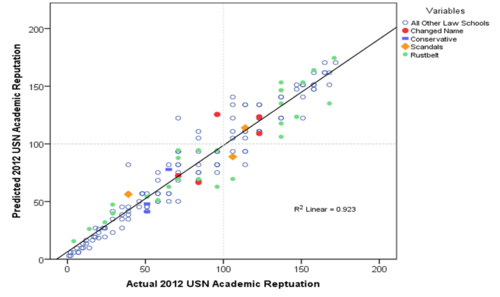 The top three outperformers in the new model are Alabama, Georgia State and Stetson.  Was their secret sauce a better faculty, or the echo chamber aided by sunny weather, a growing southern economy, and/or cheap in-state tuition in an era of rising costs?  Regardless, congrats!

Here is a very big puzzle.  Law faculty are comprised of very smart people, yet we organize virtually all of our hiring, strategic plans, and marketing efforts in an effort to make gains in a reputational game that cannot be won.  Why?  That is a very big topic and, alas, the basis for a future post.

Fascinating stuff. One caveat/question: is it possible (a) that chasing reputation with mailers, etc., does help, (b) but that with most schools all doing it similarly, it cancels out? I'm not sure there's any way to test that: I suppose we could try to identify maybe the few dozen schools that have NOT done reputational marketing (which may not be possible), to see if they have declined -- but even if we found such an effect, it's possible that "not doing marketing" would be just a proxy for another, more substantial variable, like "low on discretionary funds."

But I don't want to make too much of a deal out of this caveat -- you convinced me.

Come on, it is a simple answer. Money (must justify those ruthlessly over-inflating tuitions and salaries...*somehow*) and blind ego.

Not that it has stopped these self-proclaimed intellectuals from voting - or inspired them to work on a better (or *any*) system of "value add" evaluation - *that* might bruise a few hothouse egos.

(I'm talking about tuition-justifying value-add for the students here - not ego preening a la Richard II or Brian Leiter...).

To follow on your question, and Scott's answer: the reputational race is one that cannot be won, but can be lost. Schools are now frantically running to stay in place, and we have examples of what happens to schools that stumble (see: Illinois, Villanova).

Scott, regarding the question whether lack of marketing imposes a reputational cost, I think Larry Cunningham's study would have captured that. If you don't get a boost for marketing materials, you don't get dinged for doing nothing. Unless Larry's dataset had 90-100% of schools with the same position in a positional arms race (complete unity, which can't be modeled).

I guess I need to study the article to be 100% this did not affect the dataset.

Thanks for the observation, which is worth checking out to be certain that marketing has zero effect. bh.