NALP just announced that the median salary for first year associates in Big Law has dropped from $160K to $145K.  I think that is very significant.  We are now back to to the entry level price point of 2007.

Here is another important piece of NALP data, generated from the print versions of the July 2012 NALP Bulletin.  It shows the percentage of entry level law jobs that are private practice. 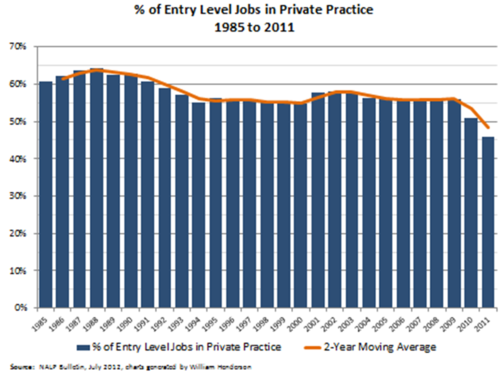 Two takeaways here: (1) there is a longterm trendline showing a declining number of private practice jobs--and that is the economic engine that enables law schools to exist at current tuition levels, and (2) the cliff-like dropoff in 2010 and 2011 is likely Big Law, and that hurts.

Prof H - thanks for posting this and making comparisons. By the way, did you note that NALP's chart's a bit gorked (the one at your first link above)? They have salary median amounts in the "# firms reporting" column and vice versa.

Goodness me, where DOES one get a good proofreader these days?

Fewer barnacles on the ship of state.
No sympathy here (until I need a lawyer).

Thank you for the data Professor, you are an honorable man among dishonorable ones.

vs. the number of graduates employed as lawyers (this is trickier - the BLS has some data based on surveys) -

But as you can see the data is incomplete and internally-contradictory (probably as a result of different survey methodologies and timing.)

In any event, it appears that a *huge* fraction (although perhaps not inconsistent with the 50% to 60% figures for starting jobs in private practice in your chart) of law grads never end up as lawyers (40% to 50%).

That applies to *40+* years worth of lawyers.

That is a lot of well-educated, well-motivated people who unknowingly played financial Russian roulette and lost - largely because of law school corruption in disclosing outcomes (pre...and for a long time, post-internet).

Please continue your good work on getting more (honest) information out there.

Thanks for passing along these data. There will certainly be some long-term decline in law firm jobs in the future, but there is good reason to believe that 2011 is the bottom of the trough, not an indication of the magnitude of the future decline. The overwhelming majority of layoffs during the recession occurred in 2009, which meant that students in the class of 2011 interviewing for 2010 summer associate jobs were the hardest hit. This in turn resulted in difficulties for them that are reflected in the class of 2011 employment numbers. At least at Georgetown, the percentage of students with summer associate positions has dramatically increased within the past year,suggesting a more moderate future decline in law firm jobs. Not back to where it was, but not falling off a cliff.

As for private practice more generally, I suspect that the NALP data are not capturing jobs that are migrating to some non-traditional providers. It seems more plausible to say that the demand for legal services by business clients is likely to remain strong compared to the demand in other sectors, but that a growing portion of that demand may be met by alternatives to traditional private law practice organizations.

None of this, of course, is meant to deny that law schools need to think deeply about their mission in a time of significant transition. We just need to be careful about how quickly we jump to broad conclusions. You're an important voice, Bill, in helping us engage in that analytical process.