NPR's Planet Money has a story on interplay between higher college and university tuition and changes in financial aid.  As shown in the graphic below (from the College Board), the federal government is assuming a larger role in finaning higher education. Every other source of funding is shrinking its a proportionate contribution to financial aid.  Despite favorable bankruptcy laws enacted in 2005, the federal takeover of higher ed financing has almost completely muscled out the private lenders.

Coincidentally, a colleague forwarded to me a pointed commentary from zerohedge.com, which suggests that recent comments by Ben Bernanke portend serious financial instability.  In 2007, Bernanke said:

"At this juncture . . . the impact on the broader economy and financial markets of the problems in the subprime markets seems likely to be contained" - March 28, 2007.

"I don’t think student loans are a financial stability issue to the same extent that, say, mortgage debt was in the last crisis because most of it is held not by financial institutions but by the federal government" - August 7, 2012

Now take a look at the federal government's holding of consumer debt (overwhelmingly student debt that has piled up since the 2010 legislation). See Henderson & Zahorsky, The Law School Bubble, ABA Journal (Jan. 2012). 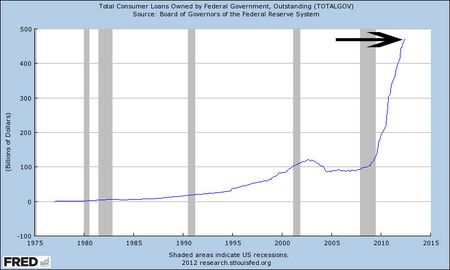 Student loans are viewed as "assets" by the federal government ... until they become uncollectable, in which case the value of the assets eventually has to be adjusted through write-downs, just like mortgages in the mortgage crisis.  Extensive use of Income-Based Repayment makes it possible for a student loan to be simultaneously uncollectable but not in default.

Folks, I am an unapologetic New Deal Democrat.  But the current "system" of federal higher education financing is near perfect insanity.  We set tuition and, no questions asked, the federal government writes us checks in exact proportion to students' willingness to sign loan papers.  For young people who have never worked, it is all like Monopoly money.

The only way the math works is if the real earnings go up en masse for virtually all college and professional school graduates.  In a rapidly globalizing world in which our students are competing against Chinese and Indian professionals, the assumption of mass rising real incomes is implausible.  See, e.g., views of economist Alan Blinder in this NPR article.

Right now we--higher ed and the nation as a whole--are maintaining the illusion of prosperity through debt financing heaped on naive young people.  This is immoral in the extreme.  Moreover, in the long run, it is economic and political ruination.

The only long term solution is cost containment imposed on higher ed by reforming the terms of federal financing.  The financing has to incentivize educational productivity -- i.e., fewer tuition dollars expended to obtain better skills and learning as measured by marketplace earnings and innovation.  No more $100,000 checks from the federal government for sorting students by standardized test scores.  Our graduates will actually have to think, collaborate, communicate and problem-solve at a very high level.  How many of my fellow law professors grasp the depth of our problems?  Not enough.

Excellent post. You may be interested in my parody of the federal system of funding higher education: Loanocare, http://insidethelawschoolscam.blogspot.com/2012/07/loanocare.html

"The only way the math works is if the real earnings go up en masse for virtually all college and professional school graduates."

Actually, no, this is not correct.

The net interest margins on student loans are quite high, default rates are low, and recovery rates are very high.

The government can absorb large defaults (or non-repayments) and still turn a profit on those who do repay.

The government also profits from increased tax revenues, since the educated earn more and are unemployed less. Roughly 40 percent of the wage premium ends up going to governments.

Schools do a lot more than sort people by SAT scores. The countries with the highest educational attainment (i.e., percent of pop. with a bachelor's degree) have the highest PPP GDP per capita.

Same goes for the U.S. states--the more educated the population, the richer the state.

It's called "human capital" because it is an investment that pays off very well.

If you're interested in facts and data instead of alarmism and hype, read "Risk Based Student Loans" on SSRN.

One of the most basic changes we could make is also one of the easiest - stop using the word "affordable" when we mean "subsidized".

We have allowed the political class to conflate the two terms (for their own benefit, not ours) as if they are synonyms, when they are NOT... and then we wonder why we're still broke no matter how many reforms we enact. Sending part of the bill to another mailing address does NOT make it more affordable, it only hides part of the cost.

The same can be said of so-called "affordable housing" and "affordable healthcare"... both common phrases seen in the domesticated media, but rarely sighted as concrete realities out here in the wild.

Stop the lies, stop the spin, heal the nation. As the man once said: "The truth shall set you free."

Let's stop and think for a minute--your link at SSRN says almost exactly the OPPOSITE of what you posted, here.

So, if you are a liberal democrat, why are you not proposing a comprensive regulatory scheme for tuitions, like an electric company must face where it has to demonstrate the prudence of its expenditures?

Incidentally, the way out of the law school mess is not making law school really super duper fantastic.

There is nothing that better or more school can do to help.

The way out is the way we took in. Bring back the LLB. Make law an undergraduate major and save the kids 3 years of tuition right off the bat.

Will it work? Of course it will. I am a lawyer who did do the whole 7 year thing. Luckily, the tuition was only $1,200 a year back then. But, my father and grandfather were both lawyers and they both had LLBs. We practiced in the same firm and the same city, although Grandfather had retired before I started. They were both great lawyers, better than I, with all of my book learning.

Absolutely right, Walter Sobchak. It's high time that The University was brought to heel under the governments leash. We need regulations on what every professor teaches, price controls on books and tuition, and the room & board fees need to be brought under the jurisdiction of the FHA.

I'm a little late with this posting, but here goes. One way to stop the merry-go-round would be to bring back ch. 7 for student loans (say after 7 or 10 years from graduation, to prevent gaming of the kind that we saw back in the 1970s) and to make the educational institution contingently liable for all or part of the discharged debt. It seems to me that this would produce the right incentives and eliminate a lot of the moral hazard that the current system produces in spades.