Which law schools lose the most when applicants decline?

This is a simple question of great practical importance to many law schools, yet very few law school administrators understand how to answer it.  Who would have thought that clarity would be supplied free-of-charge by an underemployed recent law school graduate? 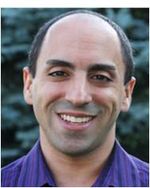 But that is what is happening now, in "Tough Choices Ahead for Some High-Ranked Law Schools," an Am Law Daily essay written by Matt Leichter, one of the silver linings of the declining legal job market -- and there aren't too many.  Matt is a J.D.-M.A. in law and international affairs from Marquette University who passed the New York bar in 2008, finished his masters work in 2009, and then moved to the Big Apple as the bottom was falling out of the entry level market.  Unable to find conventional legal employment, Matt started doing freelance writing on law-related topics.

With plenty of time on his hands, Matt turned his graduate-level quantitative skills to the task of analyzing a law school education market that seemed unsustainable.  Matt first put his analyses on display at the Law School Tuition Bubble.  His writings eventually attracted the attention of The American Lawyer, which has now published several of his data-driven essays.

Here is what sets Matt apart.

Matt has all the core skills of a truly great lawyer.  Finding no takers, the entire legal education establishment benefits by Matt channeling his time, energy, and considerable intellect into relevant topics crying out for dispassionate analysis.

His "Tough Choices" essay is a real gem.  Here is the bottomline:  This year's applicant cycle likely will deliver its greatest blow to US News Tier 1 schools who generally admit students who were angling to get into even higher ranked schools.  This inference can be teased out of the ratio of applicants to offers (selectivity), and offers to matriculants (yield).

To conduct this analysis, Matt had to cull data, school-by-school, from several years of the ABA-LSAC Official Guide to Law Schools (aka "the Phonebook"). But it enables him to produce the chart below: 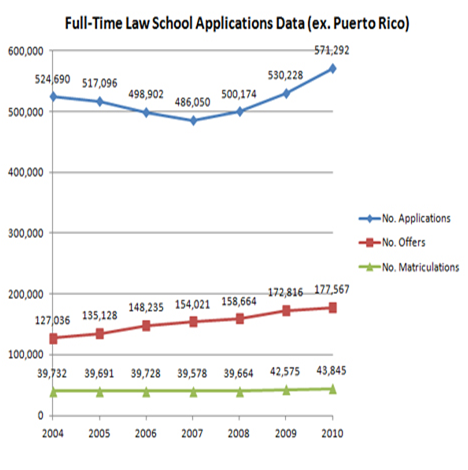 What this chart says is that admissions officers have to read more applications and make more offers to fill their entering classes.  Based on the data in Matt's chart, in 2004, for all ABA-accredited law schools, there was a 24% acceptance rate, and a 31% yield from those offers.  In 2010, the acceptance rate went up to 31% (schools were being less selective) and the yield went down to 25% (fewer showed up to enroll).

Applicant volume may be declining, but the trends above suggest that there is a lot more "competitive shopping" going on. Why? Because information costs are going down and prospective students are adapting.  And this year is bound to be the most aggressive year ever.  According to this NLJ story, It's a Buyers' Market for Law School, virtually every student is now negotiating for scholarship money.

Declining applicant volume, shifting yields, and highly informed consumers make it very difficult for law school administrators to lock in their LSAT and UGPA numbers, which schools generally fixate on because of U.S. News ranking.  This produces pain in one of three ways:

#1 and #2 may seem like the prudent course, but a central university won't (more likely can't) provide a financial backstop for more than a year or two, if that.  If the admissions environment does not change dramatically, which seems unlikely, some combination of layoffs, rankings drop, or closures will have to be put on the table.

Matt's ingenuity is on full display when he demonstrates, with data, the profile of the most vulnerable schools -- and its a far cry from the bottom portion of the U.S. News rankings.

Until August and September, when the wait lists finally clear, nobody really know the depth of market shift.  Only then can the budget holes be finalized.  Deans will then have candid conversations with their central administrations to answer the question, "Is this downward trend permanent?"

I think Dean Rodriguez had an excellent take on this article.