These Data Will Fundamentally Reshape the Legal Education Industry

Just a few days ago, the ABA Section on Legal Education and Admission to the Bar posted on its website, in downloadable spreadsheet format, the employment outcomes for the Class of 2011 (here). In a few short years, these data are going to fundamental reshape our industry.  The changes will make the industry better and stronger, but the journey to this better place is going to painful and disorienting for all law schools—that’s right, even the elite national law schools will be affected.

This is worth explaining in very simple and concrete terms.  The Class of 2011 employment data consists of 134 variables on 200 ABA-accredited law schools-- 26,800 discrete data points, which is enough fill a phonebook.  For a long time, the policy of the ABA was to do just that – publish a phonebook of data in the form of the ABA-LSAC Official Guide to Law Schools.  Well, decisions on where to attend law school are not free.  They require time and effort.  When a prospective student has to wade through a phonebook to assemble relevant data to make important decisions, many (most) will forgo the exercise altogether.

This has two very important effects:

Yes, the U.S. News has serious flaws; and every year, overreliance on them produces tragic consequences in the form of excessive student debt.   Now, with the ABA employment "phonebook" in spreadsheet format, those a with modicum statistical skills and an internet connection can analyze, simplify and publish relevant statistics that will better inform the decision to attend law school.

Consider the chart below: 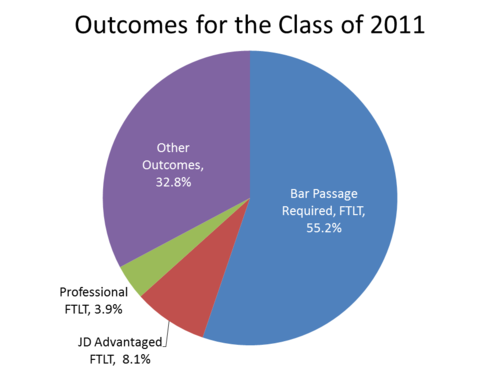 When I created this simple pie chart, I started with a simple premise: If I am applying to law school, my minimum hope is that nine months after graduation I will be able to obtain a full-time, permanent professional job.  The phonebook has three columns of data that speak to this hope:

All the other myriad data columns, parsing things by part-time, short-term, non-professional, unemployed, unknown, etc., do not meet the minimum hope.  So they are lumped together as “Other Outcomes.”  Clearly, for 1/3 of the Class of 2001, their full-time, permanent professional ambitions have not yet materialized.

A reasonable next question is how these figures vary by U.S. News rank. The answer is reflected in the chart below. With these relative benchmarks in place, a prospective law student can look for law schools that are outperforming their U.S. News rankings.  And there are quite few.

For example, in Tier 4, St. Mary’s (Texas) has 78.3% Bar Passage Required placement; Mississippi College’s figure is 75.3%; and Campbell (NC) is 71.4%.  These schools aren’t feeding BigLaw, but their graduates appear to be full-time practicing lawyer nine months after graduation.  What accounts for their success? Most of their graduates are probably in cities and towns far away from corporate practice.  Nonetheless, these schools have a clear niche they are filling.

In contrast, there are 20 schools in Tiers 1 and 2 that have less than 50% Bar Passage Required jobs.  What do they have in common?  Many are in big cities in the Northeast and Mid-Atlantic or California--large urban markets that are attractive for young professionals.  It is likely that too many young lawyers are chasing after a finite set of legal jobs.  It is worth noting, however, that these same schools also have rates of placements in JD Advantage and Professional jobs that are higher than other law schools at statistically significant levels.

So many young law graduates are voting with their feet.  Better to stay in the city as a non-lawyer professional than to move to the South to be country lawyer doing small firm practice.  Although I suspect a large proportion of these grads will fare quite well, it is important to keep in mind that JD-Advantaged and Professional jobs are not a panacea—they are also in short-supply.  At most schools in Tiers 1, 2, 3, and 4, between 30% and 42% of graduates are either unemployed and underemployed in jobs that are either nonprofessional, part-time, or short-term.   Indeed, 4.3% (1,874) of all jobs for the Class of 2011 were funded by the law schools themselves!

As I have said previously (here and here), the current legal job market reflects a structural change in the legal sector—these numbers aren’t going to turn around in a year or two.

So what is going to happen?  Notwithstanding the heady optimism of the “Kaplan kids”, the ABA employment data, thanks to the blogosphere, is going to reduce information costs, making it easier for prospective law students to determine whether law school is a good investment.  The needle is going to move, just not as fast as a Chicago School economist might predict.

The utter transparency of a changing and stagnant legal market has potentially more dire consequences for law schools.  The lifeblood of the entire legal education establishment, including elite law schools, is federal student loans.  Our students get the same generous terms as graduates of medical and dental schools, who are not struggling to make six figure incomes.  The graphs above suggest that a large proportion of our students will be on Income-Based Repayment (IBR), which is – functionally – insurance in the event a high income fails to materialize in the years following graduation.  The downside risk of that insurance – lack of repayment of expected principal and interest—is borne by U.S. taxpayers.

Right now, it is possible to estimate the size and probability of this downside risk. All the Federal Government has to do is add-up the shortfall between the repayment of principal and interest in normal repayment versus the monies actually being collected.  What percentage of graduates are on IBR?  What portion of their current principal and interest are they able to pay?  These are simple numbers that some enterprising journalist will eventually request. Further, they are legitmate public policy questions that we, the legal academy, should face long before the journalists get there.

Lawyers and law schools are not a favored interest group on Capitol Hill.  We need to plan for the extremely high probability that the financing of law schools will be dramatically altered in the years to come.  The longer we wait, the more painful and disastrous the transition.  Every law school will need a damn good story to justify continued federal loans.  And right now, many of us lack that story – being in Tier 1 or T14 (where debt loads tend to be the highest) won't mean anything if the math falls short.

In summary, our ivory tower is crumbling.  With the ABA putting the employment data in downloadable format on its website, law schools will have to do something completely new and scary to us—we are going to have to compete to keep our jobs and stay in business.  The litmus test is going to be the ability of our graduates to obtain remunerative professional work in a highly competitive global economy.   This is very serious work.

The irony here is that the lawyers that get jobs charge enormous hourly fees and work extremely long hours. High cost and overuse are hardly the hallmarks of permanently depressed demand. It seems to me that the real market inefficiency is the inability of demand for legal services to reach the glut of supply of those services.

Maybe it's time to allow non-lawyers to manage and own law firms. Surely there is a better allocation of the resources in the legal market than overworking the best lawyers for enormous fees while allowing the remainder to go unemployed, or underemployed as contract attorneys.

Regardless, any solution that will reduce the supply (and increase the price) of legal services to the average joe is going to be politically difficult.

Query: Do clerkships fall into other outcomes? (Most would not consider 1-2 years "long term" and virtually no clerkship is "permanent.") If so, the data appears to overstate the "Other Outcomes" at the T14 schools

As usual, well said, Bill. These are indeed extraordinary challenges that need to be met head-on by law faculty. Our students (and potential students) are talking about all of this, so we need to figure out how to address these issues rather than ignore them or hope they'll go away. Interesting--and possibly transformative--times!

The continuing tragedy is that placement *salaries* continued to be hidden.

As with placement rates previously, they are being hidden for a reason - they would bring down the current student loan-law school tuition-industrial complex.

"Query: Do clerkships fall into other outcomes?" etc.

Note: We could all stop wasting our time with guessing games if the schools and the ABA did the ethical thing and provided full disclosure of placement and salaries.

But that would ruin their fraud-based business model.

There is no reasonable excuse why graduate placement information has to be pried out of taxpayer-funded institutions (*federal* student loans, anyone?) like a dollar bill out of the hand of a dead crack whore.

Definitely well said. Also, have you seen the "gainful employment" figures that the government has recently released? They include a number of proprietary law schools (Western State, Florida Coastal, Phoenix, Charleston). Even by relatively generous "gainful employment" standards, these schools are struggling. The full spreadsheet data for all schools is available here: http://federalstudentaid.ed.gov/datacenter/gainful2.html , and a searchable database is here: http://chronicle.com/article/A-First-Look-at-Gainful/132589/

To Noah, regarding judicial clerkships -- they count as full-time long term if they are 35 hours per week and last one year or more. bh.

Do clerkship's fall into other outcomes?