The U.S. Census Bureau just released its 2010 data for the County Business Patterns (CBP) dataset.  CBP compiles payroll and employee headcount data by sector for all employers operating within the U.S.  CBP is what is know as universe data.  It is not a sample; it's a census. 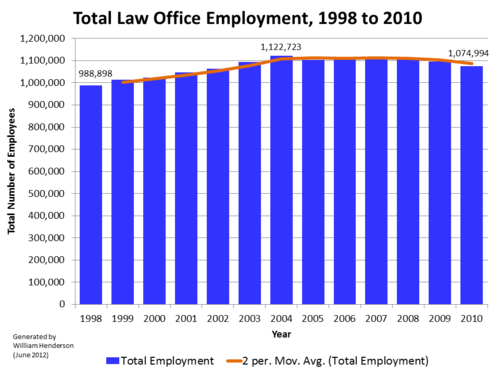 "All Other Legal Services" seems to be doing pretty well, adding jobs while the number law office jobs declines.  What is in "All Other Legal Services"?  Almost certainly registry services for contract lawyers (doing e-discovery on a temp basis) and the domestic operations of legal process outsourcers.  See here.  The average job in this sector pays less than $46,000 per year compared to $79,900 in the law office sector.

What does all this mean?  For law firms, it means a brutal competition over marketshare.  Survival will require innovation. Yet, many lawyers are in denial.  For law schools, it means the same thing -- there are too many law graduates chasing after a shrinking number of opportunities.

We legal educators have a really hard time getting our head around this changing market -- naively, we think the solution is a grand idea that will surface during an academic conference.   That's not going to happen. Instead, to survive, each law school is going to have to get more than its proportionate share of high quality jobs for its graduates -- you don't have to outrun the bear, just the other law schools.

The key drivers here are: (a) what we teach, (b) how we teach it, (c) relationships with employers, and (d) relationships with alumni -- our best, friendliest windows on the real world.  To turn this corner, a school needs great leadership that can move recalitrant faculty toward a difficult and complex new reality.  Good luck!  Time to get back to the work of Indiana Law.  For additional analysis, see The Hard Business Problems Facing U.S. Law Faculty.

The legal job market is very bad; however, what is even worse is that most law schools do not teach people how to look for jobs. There are over 100,000 attorney-related positions on sites like LawCrossing.com (which gathers jobs from law firm and company websites) and many go unfilled because people simply do not look for jobs in the correct places. People then end up unemployed, dropping out of the practice of law and so forth. It is a real tragedy.