Lots of Jobs for Law Graduates -- just not Grads in the U.S.

This story is fresh off the newswire: "Law firms are no more the preferred destination for fresh law graduates looking for jobs.  With outsourcing catching up even in this industry, legal process outsourcing (LPO) companies are now bagging a large number of graduates."  A law professor opines, “There is a rising trend of students opting for LPOs. The nature of work is changing and these places offer good packages and work culture. ... [P]romotions also come faster in LPOs.”

Wonderful news.  But the story was written for the Hindu Business Line.  The law graduates went to school in India.  Why are the LPOs become more attractive jobs for Indian law grads?  Probably because (a) LPOs are increasingly focusing on process and technology, engineering out the drudgery work, and (b) process and technology are creating a sustainable competitive advantage within a global industry -- and that can support higher salaries.

In the same story, Rohan Dalal, the Managing Director of Mindcrest, a U.S.-based LPO with headquarters in Chicago, pegged the annual growth at 30% per year [remember that number].

Dalal explains his hiring philosophy: "There are very few lawyers available in India who are experts in the laws of the US or the UK, which constitute a bulk of our clients. In general, therefore, we prefer to hire younger legal talent, whether fresh or a few years out of Indian law schools." (Historical note: Paul Cravath explicitly focused on new law school graduates in building his firm.  Why?  He did not want to undo the bad habits and fixed ideas of other (inferior) employers -- he too had a process.)

The president of Mindcrest is a former partner at McGuireWoods, an AmLaw 200 law firm.  According to its website, Mindcrest now has 600 employees.  How many are in the U.S.?  We have no idea -- but we can triangulate data from other sources in order grasp the magnitude of changes occurring as a result of companies like Mindcrest..

So consider the following, which I believe signals a true structural shift.

Chart 1 below is generated from County Business Patterns data.  It summarizes U.S. Law Firm employment according to the North America Industry Classification System (NAICS), which is how the U.S. Census Bureau groups and categorizes economic activity.  The NAICS went into effect in 1998, replacing the Standard Industrial Classification (SIC) system, which reflected an industrial economy rather than one driven by information and services.  The advantage of County Business Patterns (CBP) is that it is not a sample -- it is "universe" data.  CBP covers everyone working in the U.S. who received a W-2.  Law firms, as shown below, comprise a 1.1 million employee sector.  [click on to enlarge] 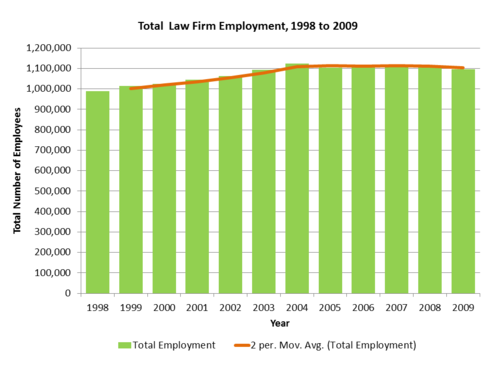 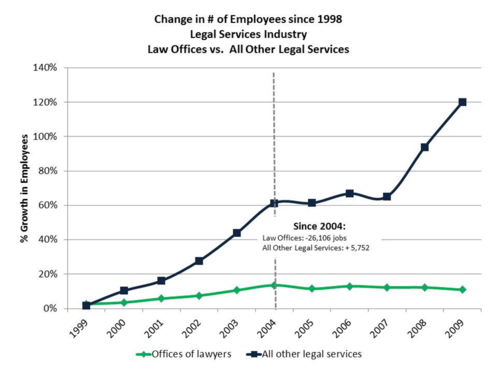 Between 1998 and 2009, the "All other legal services" category grew from 1.0% of the Legal Services Sector in 1998 to 1.9% in 2009, essentially doubling in importance and more than doubling in absolute employment. The CBP data are collected in March of each year.  So the data in the public domain is now over three years old. (The 2010 CBP data will be released next month.)  If the 30% growth rate is correct, the "All other legal services" sectors could be 3-4% of the U.S. legal service market. As this category becomes bigger, the Census Bureau will examine all the companies in the catch-all category and create new classification bins.   LPOs are likely to be but one new category.

Based on the large number of legal services vendors that I have met over the last two to three years -- only a subset were LPOs like Mindcrest-- and the general growth and vitality of their businesses -- most financed by nonlawyer money -- I would be surprised if the black line in Chart 2 did not continue along at a 30% per annum clip.  Further, keep in mind that the black line is only the domestic component of a global supply chain.

If we play 30% growth over a 10-year period, the total employment increases by a factor of 13.8 (in other words, take whatever total employment is, and multiply it by 13.8).  So, applying that factor to the 21,600 employment in "All other legal services" in 2009 would equal 300,000 in 2019.  Granted, a large portion of these jobs would not show up because the employment opportunities will be increasingly in places like India.  Further, technology may curtail overall growth of even Indian legal jobs. But here is the bottomline -- under all scenarios, the number of traditional jobs for U.S. law school graduates will almost certainly stagnant or decline.

For lawyers and law professors, our cheese is being moved.  Over the last three years, I have given several dozen structural change talks.  Many lawyers tend to view it with skepticism or a desire to just run out the clock.  The law professors tend to treat it as just another academic workshop.  Regrettably, we have conditioned ourselves to believe that all ideas and data we discuss are just that -- academic.  In contrast, just this week, two general counsel of growing and important technology organizations told me -- largely in passing, not to make a point -- that Indian lawyers living in India are a regular part of their global work teams.

The longer we ignore this, the more foolish we will look.  Legal service vendors, again financed by the nonlawyers, are now in the process of taking over larger portions of the global supply chain; and thanks to technology and process, the work is destined to be lucrative.  Within a decade, a nonlawyer will be heralded in The American Lawyer for inventing a legal process.  And many U.S. law schools will shrink in size and eventually close.  Why? Because what we teach is increasingly disconnected from how law is being bought and managed by clients.  This is what structural change is eventually going to look like.

Bill, That no one has commented on this stuns me. Your observations are frighteningly on point. You are Paul Revere in legal academia and no one wants to wake up and realize what is going on much to their peril. Thanks for this very informative, detailed, and statistically eye-popping post. I'm sending it and sharing it with everyone I know.

The number of law graduate jobs is expected to rise by 5.4 per cent this year according to Association of Graduate Recruiters’ (AGR) bi-annual survey. This finding is a positive step forward as it was predicted that there would be a fall of 1.2 per cent in available jobs across all sectors.