The Job Outlook for Lawyers: Projections from the BLS

Recently released data from the Bureau of Labor Statistics provide more evidence that the legal job market for graduates will be extremely difficult for the next several years.   The data come from the BLS Occupational Outlook Handbook, which is updated annually.  Below is a BLS bar chart* comparing growth in lawyer jobs versus other legal sector jobs versus the economy as a whole: 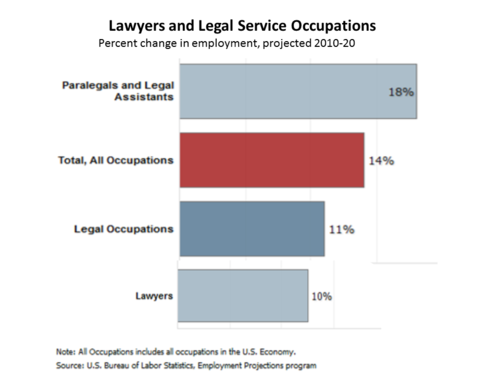 [G]rowth in demand for lawyers will be constrained as businesses increasingly use large accounting firms and paralegals to do some of the same tasks that lawyers do. For example, accounting firms may provide employee-benefit counseling, process documents, or handle various other services that law firms previously handled. ...

Competition [for lawyer jobs] should continue to be strong because more students are graduating from law school each year than there are jobs available. ...

The public debate often talks about the surplus of lawyers as if the hand of a regulator could or should turn down the spigot on entry level lawyers.  Yet, no such spigot exists.  Overproduction is primarily a function of optimism and the availability of federal loans.  Over the medium to longer term, I see three possible ways -- all mutually compatible  -- to unwind lawyer overproduction:

#3 is the only factor in the control of law faculty, albeit it calls for something radical -- change in what we do and how we do it.  Call me crazy, but I think #3 is actually a huge opportunity for a law school with the right leadership and the right mix of faculty.  I am currently in the process of sketching out a blueprint anyone will be free to use or make fun of.

* The chart splices together BLS lawyers and paralegals/legal assistants.  It is interesting to note that nonlawyers jobs are projected to grow nearly twice as fast as lawyers.  I doubt this trend would be obvious to those of us in the academy; the magnitude of the difference surprised me, though it makes sense.  According to the BLS, paralegals only make $46,700 per year -- much cheaper than a junior lawyer and no expectations of a promotion.

N = fairly small sample, but I know a lot of junior lawyers who would love to make $46K.

Part of the problem may be this:
http://www.bls.gov/ooh/Legal/Lawyers.htm#tab-5

If other news sources are to be believed the market is extremely bi-modal, segmented, and concentrated at the either end. It is very hard to move from the low to the high end if you don't make the cut right out of lawschool. Even if you did, many with offers who graduated in 2008-10 had them rescinded or were let go during their first year, with no real path back.

I'm actually surprised by less then 10% under 54k. Maybe I know too many state court clerks and lawyers in small practices

I agree. I know plenty of junior attorneys that would have a death match for $46K.

The BLS statistics and growth projections don't make sense. First of all, they start with the number of "lawyer jobs," being 728,000. Where does this number come from? Does it include the total number of JDs licensed to practice in each state? or does it only include those JDs who actually work? There may be a huge number of non-working licensed JDs in each state who voluntarily "retire" from the practice due to dismal job market and due to not wanting to pay registration fees for no reason. WHen you ask the BLS how they come up with their data, you get some mumbo jumbo, and some answers that show they didn't do a lot of digging. And with outsourcing of legal jobs taking off like crazy, how do they project any growth, unless they're including employment of lawyers in Mumbai (?) Big corps are sending the law jobs directly to INdia without even discussing the practice with their outside counsel. So where does the BLS see growth? Makes no sense

I have some sympathy for readers who dispute the BLS data. I have two responses.

First, the role of the BLS is to collect data on U.S. jobs. When the objective is that broad, the statisticians and economists are bound to lose a huge amount of nuance that could be obtained through a more targeted industry-specific approach. A more nuanced approach would include interview data with a wide and representative sample of people working in legal services. The benefit of the BLS approach, however, is that we can see long term industry trends and also compare specific sectors. Why? Because the methodology is uniform over time.

Second, it is important what inferences we draw when we identify a weakness in data. If we live inside an industry, we need to be careful we don't assume that we know the right trendlines. Within any industry, no one has representative experience. I think the readers here may be the right that BLS's projections, modest as they are in terms of growth of legal jobs, may be too optimistic. But conclusory statements to that effect are not persuasive or helpful. To my mind, considering data from many sources (BLS is only one) and talking to many people in a wide range of legal subsectors provide the best way to assess the state and future direction of the larger U.S. legal sector. But that takes a lot of work. And even then, the conclusions we can draw many not be rock solid accurate.

So, to be clear, the BLS data provides one useful perspective--cross-industry over time--but it is not definitive. A definitive perspective does not exist.

I like the idea of turning the J.D. into a more versatile degree for future law students, but what about creating seminars advising past J.D. graduates how to market their skills for other career ventures. I know I will be well suited for a number of jobs, such as patient advocacy, helping consumers understand their health, life, insurance plans. Yet my abilities have nothing to do with it; they want to a nurse. Apparently, they were taught in nursing school contract and insurance law. I graduated from the University of Baltimore in 2009 and have applied for over 550 jobs. I couldn't afford to stay in Baltimore so I had to move in with my parents in Hagerstown, MD. 120,000 dollars in debt and stuck.
Hagerstown, the surrounding "cities offer don't offer job prospects for someone like me.After I called every single lawyer in town and beyond, begging for an internship to no avail. Next, I inserted the J.D. on applications, I deleted it.Retail jobs; Target, Macy's--none would have me. I called every single lawyer in town practically begging for internship. Retail jobs; Target, Macy's--none would have me. All those years of education eventually changes your disposition and it's visible.
As a result of unemployment, I feel useless, regretful, guilty, stuck and a complete failure. I was the first in the family to go law school; dad and brother practice medicine. A couple more of my uncles and aunts do. The rest are IT specialists at IBM, Microsoft, blah, blah. I'm the laughing stock of my entire family. I'm lazy and am told by many that I am suffering the consequences for pursuing a career that does involve studying and working hard. To say I'm depressed is an understatement. Since graduation, I've been hospitalized twice. The ECT I was failed to give me any relief.
I'M ANGRY AND I FEEL THE SCHOOL HAS A RESPONSIBLITY TO HELP THOSE WHOM ARE STILL UNEMPLOYMED. UNIVERSITY OF BALTIMORE IS AMONGST THE MANY LAWS SCHOOLS GUILTY OF MISREPRESENTING THEIR GRADUATES MEDIAN SALARY and FAILING TO EMPHASIZE THE IMPORTANCE OF CAREER SERVICES!!! NOBODY HELPED US WITH JOB PLACEMENT.
SOMEBODY, ANYBODY OUTHERE, PLEASE HELP ME!