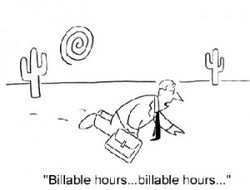 Today's morning reading provides a vivid example of how the Law & Society research, if deployed in the right way, can help the legal profession cope with large scale structural change.  An article from the Triangle Business Journal [Research Triangle in NC] highlights some recent stories documenting the movement away from the billable hour.  The reporter then canvases Research Triangle companies and comes up with this trend-line from GlaxoSmithKline, a Fortune 500 pharmaceutical company:

GlaxoSmithKline, the pharmaceutical giant whose U.S. headquarters are in Research Triangle Park, is one of the large corporate clients driving the move toward flat fees. GSK (NYSE: GSK) spent 63 percent of its outside legal budget under alternative fee arrangements last year, up from less than 3 percent in 2007, the year before the recession fully hit and the last full year before Dan Troy took over as GSK’s general counsel.

From 3% in 2007 to 63% in 2012?  This is BigPharma, one of the most heavily regulated industries in the world; products liability lawsuits are as certain as the sun rising in the East; international trade and government contracts are essential to its survival.  This is roughly $300 to $500 million in outside counsel legal spend shifted from billable hours to some alternative fee structure. This is money law firms need to survive -- although law firms might not want to dump the billable hour [translate: assume some of their clients' risk, which is not what businesses want to do without a price premium], they'll gladly do it if the alternative is extinction.  The article also quotes IBM GC Don Lui, “For us, it’s no longer a necessity just because of the recession. It’s now part of the normal process.”

So here is the opportunity for Law & Society [aka "law in action"] scholarship:  This massive shift needs to be studied, described, theorized, and simplified so it can be understood, not only by students, but also by other industry actors.  BigPharma, manufacturers, and insurance companies will come first because the inefficiencies and lack of innovation spawned by the billable hour represent a significant sum that could potentially fall to a company's bottomline.  But eventually, like water running downhill, the innovations spawned by their legal department will become mainstream.  It is hard to overstate the important of understanding the process of adaption--i.e., separating what works from what doesn't and explaning it with a sound, empirically based theory.  Our graduates have to be able to deal with change, and advise clients on how to cope with legal/business implications of change.

So here are some of the pieces of the agenda: