Different Power Rules Apply to Men than to Women

A just released study by the Yale Law Women documents that class participation at Yale Law tends to be disproportionately male (H/T to Jeff and Lior Strahilevitz at Prawfblawg).  Although the report offers prescriptive advice for Yale faculty and students on how to close the gap, it does not offer an empirically grounded explanation for why the gap exists in the first place.  Coincidentally, I recently read another empirical study that appears to offer an answer.

In an article in the 2012 volume of Adminstrative Science Quarterly, Yale School of Management professor Victoria Brescoll provides compelling evidence that different power rules apply to women than men.  Brescoll's article, "Who Takes the Floor and Why: Gender, Power, and Volubility in Organizations," found that when women possess the same objective measures of power as men, they are reluctant to use that power to speak up (i.e., be voluble) in organizational settings.

Why are powerful women less likely to speak up? Because of fear of backlash.  Further, the fear is justified.  Specifically, holding the objective measures of power constant, Brescoll found that when women were more voluble in meetings, they tended to be viewed as less likeable and deserving--and here is the kicker, less likeable and deserving at roughly the same levels by both male and female peers.  In contrast, when powerful men were more voluble, their peers--both males and females--viewed them as more likeable and more deserving.

Wow.  This is quite a problem.  Brescoll observes that "the presciptions for powerful men's and women's behavior may be much more comprehensive than originally hypothesized (i.e., power men should display their power, while powerful women should not)."  This differential in power rules is not something amenable to a quick, simple fix.  Its root cause appears to be buried deep in both the male and female subconscious. It's hard to fix what we don't understand.

Over at Work Matters (H/T), Bob Sutton posted the perfect cartoon to summarize the Brescoll study: 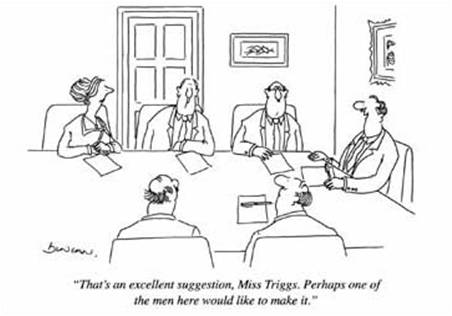 It is worth noting the Yale Law Women describe social norms at Yale that essentially mirror Brescoll's results.  On page 24 of the report, a YLS professor is quoted, "I think there’s an in-group dynamic where when women are gunners, they get punished more than men for doing it. Their classmates’ reactions are harsher.”   The report continues, "This observation finds widespread support in the student survey among both men and women. Multiple students mentioned that there are norms about participation and women are either more likely to abide by the norms or are more likely to receive criticism for breaking them."  The Brescoll study lends substantial support to this explanation.  Again, not an easy problem to solve.

Some readers might be interested in a more in-depth description of Brescoll's research design.  So here it goes.  Brescoll results are based on the findings of three interconnected empirical studies.  She starts with the established empirical fact that powerful people tend to assert their power through commanding more time--i.e., being voluble--in organizational settings.  As a historical matter, most power has been held by men.  Now that women have obtained some measure of social/organizational power, we want to know whether women, holding objective measures of power constant, are equally voluble.