As of this afternoon, yesterday's election has not been decided.  However, one thing is clear: The pundits and the pollsters got it wrong again.  As the NY Post noted, "The pollsters were wrong again — why do we listen to them?"  See also Media has a meltdown as Biden fails to deliver a landslide.

Four years ago, I wrote about why the pundits had gotten the 2016 presidential election so wrong: "On November 9, 2016, political experts woke up to a great shock: Donald Trump had been elected President. Most experts had predicted a victory for his opponent, Hillary Clinton. For example, election expert, Nate Silver, gave Clinton a 70% chance of winning just a day before the election. The New York Times gave her an 85% chance of winning the election. The same New York Times article gave Trump a 33% chance of taking Florida, an 11% chance of carrying West Virginia, and a 6% chance of winning Michigan, states he won. Overall, Trump won a clear victory in the electoral college (306 to 232). Why were the prognosticators so wrong?
The answer: Cognitive biases (thinking or brain biases)–“a systematic error in thinking that affects the decisions and judgments that people make.” In 2011, Daniel Kahneman wrote a book for the general public intended to "improve the ability to identify and understand errors of judgment and choice [cognitive biases], in others and eventually in ourselves, by providing a richer and more precise language to discuss them." (See Overcoming Cognitive Biases: Thinking More Clearly and Avoiding Manipulation by Others (2017)).  (I have also written a cognitive bias book for the law: Understanding and Overcoming Cognitive Biases For Lawyers And Law Students: Becoming a Better Lawyer Through Cognitive Science (2018).)

The additional question raised by the two above articles is why do we listen to the polls when we know they are so often wrong? The NY Post declared, "Claire McCaskill, the former Missouri senator who lost her seat in 2018 after going batspit crazy about opposing everything Donald Trump did, right down to spastically trying to block him from making routine cabinet picks, demonstrating that she had no clue about Trump’s vast popularity in her state, admitted that Democrats had managed to talk themselves into believing Trump is a lot less popular than he is." (here)  The article added, "As Jake Tapper memorably put it on CNN, “You can’t get high on your own supply.” That supply was the media-polling complex, an echo chamber in which professional Democrats and their friends who rule the culture kept singing chorus after chorus of “We Are the Champions” before the game had even started."  (Id.)

Finally, "We were giddy because the map felt like it was expanding,” McCaskill sheepishly admitted. “It looked like all kinds of different paths that we could get there.” Meaning: The Democrats actually thought they were going to capture Florida. Hey, the pollsters told them that, and pollsters never get anything wrong when it comes to Donald J. Trump, do they?"

To put it in scientific terms, the pundits who were predicting a landslide Democratic victory got it wrong because of cognitive biases.  They suffered from the conformation bias: "The tendency to search for, interpret, focus on and remember information in a way that confirms one's preconceptions." (Wikipedia) They also suffered from the semmelweis reflex: "The tendency to reject new evidence that contradicts a paradigm." (Wikipedia).  Finally, they exhibited emotional reasoning: "Letting your feelings guide your interpretation of reality."

In sum, it is very important that lawyers, prognosticators, and policy makers understand how cognitive biases can affect human thinking.  Otherwise, we will continue to make the same harmful mistakes that we have in the past. 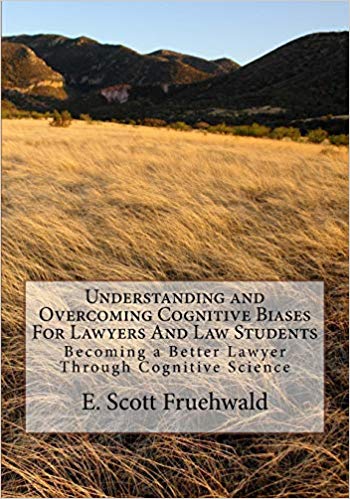