How I Learned to Stop Worrying and Love Zoom - my embrace of online teaching (with pics!) - Part 1.

I've been blogging this semester about my journey from not liking Zoom at all back in August to figuring out how to use it to replicate a more traditional classroom experience for students. Accordingly, I thought I'd share some pics of the office videoconferencing set-up I settled upon. I intended this to be a single post but discovered that our blogging platform Typepad apparently can't accommodate more than a photo or two per post (even after I've compress them). So I've separated this post into several parts (here, here, here, and here) in order to be able to post pics to show how I've used Zoom to teach my legal research and writing class this semester in a less screen-centric, more personally engaging way.

A bit of background that helps explain why I settled on this particular office set-up. As a department, the LRW profs at my school decided we'd teach the course this semester entirely online. Due to the need for social distancing in our classrooms, it meant there weren't any empty ones available from which I could teach my classes to an online audience or even record my lessons to be shown to students later. So I had to figure out a way to teach my LRW classes, and be effective doing it, from my desk. (As an aside, I much prefer to teach from my office at school rather than home as it puts me in a more serious, professional frame of mind. Plus at school I have access to any office equipment I need like photocopiers, scanners, and the IT and support staff).

I'll also note that before this summer, I didn't even own a video camera. I don't Skype, have rarely used Facetime and in general don't like videoconferencing. So, when we learned over the summer that we'd be teaching LRW entirely online this year, I had to gear up my office (and spare bedroom at home) and do it fast.

Neither my office nor home desktops had cameras so I started by buying stand-alone ones mounted on a small footprint tripod to save precious desk space. After experimenting with Zoom at the end of the Spring semester when in-person classes were called, I added a second monitor and a pair of stand-alone video lights on tripods to make sure my lessons were adequately illuminated (if not always illuminating). To upgrade from my desktop's built-in (and crappy) speaker and microphone, I bought some upgraded (yet still inexpensive) standalone ones from Amazon. I love Bluetooth but figured it was better to buy USB speakers and microphone for any extra margin of reliability. In case they failed me during class (or anticipating there might be times when students wouldn't be able to hear me well enough), I also bought a headset with a built in microphone as a back-up. Altogether, my entire office set-up probably cost less than $500. It's amazing the amount of videoconferencing equipment you can buy on Amazon for a relatively small amount.

Once the semester started, it only took me a class or two to decide I definitely didn't want my classes to consist entirely of PowerPoints and screen-shares. I also decided that the whiteboard feature built into Zoom was really balky and didn't work well for me at all.  As I've noted before, when I'm teaching face-to-face in a traditional classroom, I like to move around a lot, going back and forth between the podium and the whiteboard, and walking the aisles to engage the students. I make heavy use of the whiteboards by projecting writing samples onto them which we can then edit as a class. But without being able to broadcast my classes from an actual classroom, I wanted to figure out another way to replicate that experience for students. The problem with teaching from my office is that I'm physically tied to the desk (and my desktop computer) in order to operate Zoom, show slides, share my screen, etc. Thus, I couldn't turn one of my office walls into a whiteboard. Instead, I decided to buy an easel and a bunch of smaller, portable whiteboards that I could switch in and out during class.

The pics below (and in the related posts) tell the story. I'm curious how other readers have handled teaching by Zoom. Like me, have you tried to bend Zoom to make it more like a traditional classroom experience for students or instead more fully embraced it by making your teaching fit the platform? For what it's worth, my students have told me that they really appreciated that I've tried to make my classes less screen-centric by putting myself (and the whiteboards) on camera as much as possible. Nearly all of them said they didn't like spending class time watching nothing but screens and slides. 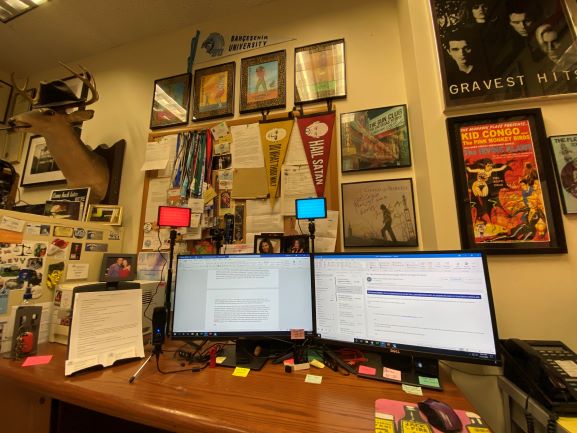 Dual monitors are de rigueur for teaching with Zoom. For me, using a single screen would be like trying to compete in the Indy 500 with a Yugo. Note also the standalone, USB microphone to the side of the left monitor and the (barely visible) pair of standalone USB speakers, one behind each of the monitors. All bought from Amazon and very inexpensive. I love Bluetooth devices but this time opted for the better reliability of USB accessories for the "classroom."  Not pictured is a USB headset with built-in mic that I can grab during class if students are  having trouble hearing me through the desktop mic. 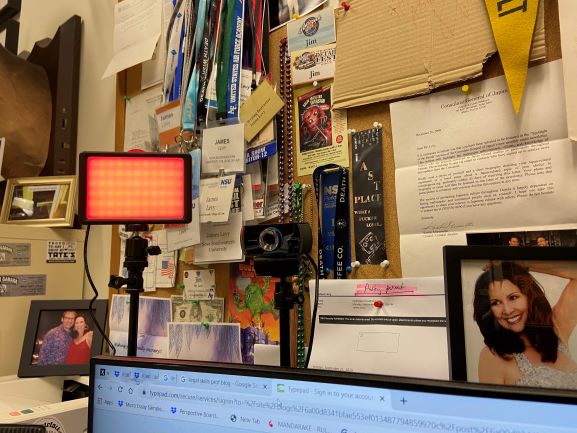 Note the stand-alone video camera mounted on a small footprint tripod to conserve precious desk space. Also shown is one of a pair of video filming lights also mounted on space-saving tripods with color filters that can help to set the mood, as needed, and illuminate any props (like books) or other visual aids I might use in class.

Continued in Part 2, below (unless I can figure out how to further compress the remaining pics to fit in a single post - I've tried several things already without success. If anyone has any advice about that, I'm all ears).