I'm passing this along for a colleague (and though it may be too late for this year's 1L spring oral argument exercises, it's its valuable advice for those upper class moot court arguments and competition that'll be happening this fall when we'll most likely still be in lockdown mode):

"In mid-March when law schools across the country converted to an online-only course format as a result of the COVID-19 international pandemic, skills faculty were faced with making fast decisions about holding final oral arguments, the typical capstone activity in persuasive writing courses.

Many months prior to the world health crisis, UALR Professor Debbie Borman arranged to hold final arguments in the Federal District Court for the Eastern District of Arkansas, as she did in the spring of 2019.  Professor Borman recruited numerous practicing attorney members of the Little Rock Woods Inn of Court to judge arguments. But once the Federal Courts announced closure and she moved the arguments online, the volunteer judges dropped off. 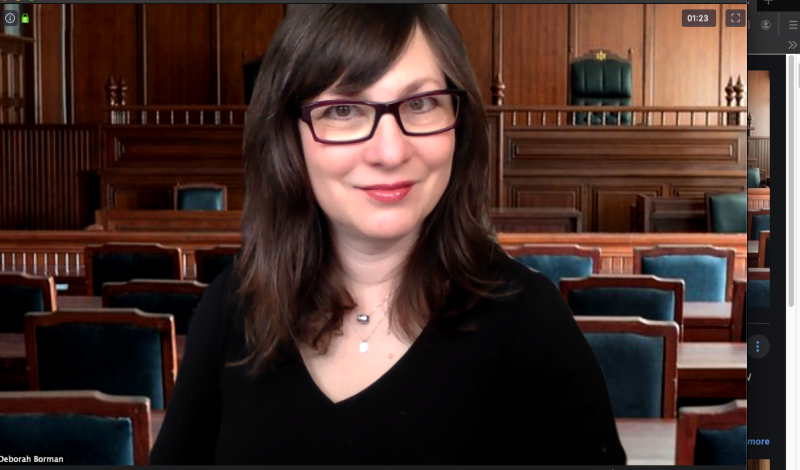 That is when Professor Borman got global: if arguments were remote, why limit judges to Little Rock?

Professor Borman went to work recruiting attorneys and judges from Chicago, Denver, Kansas City, and New York. In addition to the committed few from Little Rock that included a Federal District Judge, a Little Rock Circuit Court judge, and several practitioners, Prof. Borman recruited a panel of three former students from the first class she ever taught at DePaul College of Law in 2006; a former teaching assistant and a former student from Denver Law; a former student from UIC John Marshall, a practicing attorney who clerked in both the federal district and circuit courts, and attorneys in appellate and other fields of practice.

Allison Kort, a former law professor, judged one virtual argument. Kort is an appellate attorney in Kansas City and provided the link to zoom arguments in the Kansas Supreme Court the Saturday just prior to Professor Borman’s scheduled arguments. Students (and the professor) were able to view an identical appellate argument format and virtual logistics in action.

Judges found the experience both enjoyable and realistic:

Evan Smola, a partner in a Chicago law firm, and one of Prof. Borman’s students from her 2006 class said: “The best part of this whole process is that it precisely mirrors what is happening now in courts: parties are appearing for real arguments via zoom and Skype. Adapting legal education to an evolving legal world is critical for educators and their students.”

Jamie Dening, Prof. Borman’s former student from the University of Denver, now a New York practitioner said: “I had a lot of fun.”

Mike Rief, an Arkansas Circuit Court judge said, “it was a pleasure to judge. All of the students were well-prepared and did a good job on a new platform that all of us are going to have to learn how to navigate.”

I felt as though arguing in front of judges from different areas of the country and with different expertise pushed me to consider how my argument might be perceived and evaluated from all sorts of perspectives. – Caitlyn Brainard

Professor Borman’s innovation in arranging this experience with judges around the country is a testament to her dedication to the legal profession and her desire to prepare her students for practice by developing our ability to adapt.  - Sloane Stine

One student who was nervous about the zoom format was surprised at the ease of the argument:

For students like myself who struggle with public speaking, I was able to adjust settings to focus on the judge asking the question without any distractions. Overall it was a great experience and I honestly don’t think I would have been able to perform as well if the arguments were in person. – Vahid Sacirovic

Professor Borman is pleased that her last creative endeavor in experiential learning was so very successful.

“I loved it,” she said, “working with attorney friends and colleagues from all over the country was the ultimate great reward. My UALR students had the opportunity to learn from successful practicing attorneys with a wide field of experience in practice, judging, teaching, and clerking. The variety of feedback will serve students well in their careers.”

At the end of this semester Professor Borman will “retire” from teaching and return to practice in the Civil Appeals Division of the Office of the Illinois Attorney General."