"The case method is legal education’s signature pedagogy. Law professors point to the method with pride, and that pride has considerable foundation. In theory, the case method accomplishes at least five pedagogic goals:

Can the case method accomplish all of these goals–especially when it is used in a large classroom with a single end-of-semester exam? I doubt that the method ever achieved as much as it claims, except perhaps for the highest achieving students in a classroom. Today, the method has been quietly subverted to accomplish primarily the fifth goal: instructing students on doctrinal principles. Law schools stake their value on teaching the other four cognitive skills listed above, but we deliver less of that learning than we believe."  (here)  Similarly, Professor Jessica Erickson has asserted, "The Socratic classroom has turned into a 'soft Socratic' space."  (here)

The other problem is that most academics don't know what critical thinking actually means; they use it in a general, vague sense.   Scholars who study critical thinking have defined what it means and what thinking processes it comprises.  Here are two good definitions: Critical thinking is “[t]he intellectually disciplined process of actively and skillfully conceptualizing, applying, analyzing, synthesizing, and/or evaluating information gathered from, or generated by, observation, experience, reflection, reasoning, or communication, as a guide to belief and action.”  (here)  “It is . . . automatically questioning if the information presented is factual, reliable, evidence‑based, and unbiased.” (here)  Critical thinking is a set of processes, including metacognition, conceptualizing, synthesizing (constructing), asking questions, organizing, developing and evaluating alternatives, considering unintended results, planning, self-monitoring, reflection, spotting assumptions, evaluating inferences, exercising epistemic vigilance, supporting arguments with evidence, evaluation, skepticism, and self-direction.

As I show in my book, the Socratic method can be used to teach critical thinking systematically.  But as Professors Merritt and Erickson have asserted, as it is currently used in law school, it does not do this. 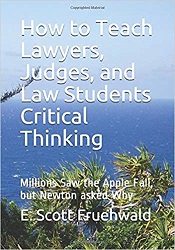 THE TROUBLE WITH CRITICAL THINKING: IT’S CORROSIVE OF THE LEGITIMACY OF THE JUDICIARY, AND POTENTIALLY CAREER-ENDING FOR ATTORNEYS
I was once a believer in critical thinking too, not to mention a believer in critical articulating. Alas, all that lofty stuff is far removed from how the doctrinal sausage gets made in our state supreme court in Texas (can’t comment on other states). Critical thinking is not going to do you much good. Texas-bound law school grads be forewarned. Learn to keep your critical faculties under guard; hone your skills in “court-centric” advocacy. That’s the reigning euphemism for a more apposite moniker that starts with sy- and ends in -ism.
Here is how it works in the Texas high court, which prides itself on a premier appellate law clerk program:
The state supreme court announces a wacky rule to cater to the vested interests of a favored constituency, such as by decreeing the proposition — to give you one example— that Texas attorneys ought to be immune from civil suit for misconduct and crimes committed in the course of their lawyering because they have a duty to aggressively represent their clients; the Court then cite itself as binding legal authority for the wisdom of that rule, and in the end slides down all the way the slippery slope where the victims of attorney misconduct have to pay the malignant attorneys, rather than the other way round. If you don’t like the slippery-slope cliché, call it path dependency.
Case in point: Bethel v. Quilling, No. 18-0595 (Tex. Feb. 24, 2020), affirming Bethel v. Quilling, Selander, Lownds, Winslett & Moser P.C., No. 05-17-00850-CV, 2018 WL 2434410 (Tex. App.-Dallas May 30, 2018, pet. filed) (mem. op.)(no criminal conduct exception to common-law attorney immunity; attorney entitled to dismissal under rule 91a and award of attorney’s fees against wrongful-death plaintiff). http://www.search.txcourts.gov/Case.aspx?cn=18-0595&coa=cossup
“CRITICAL THINKING” ON INDUSTRY-WIDE TORT IMMUNITY BESTOWED BY JUDICIAL FIAT COULD BE HAZARDOUS TO YOUR LEGAL CAREER
If you were to criticize the judicially-crafted rule that Texas attorneys are above and beyond the reach of civil tort system, you are liable to be accused or suspected of being a Russian agent bent on spreading lies. See Chief Justice Nathan Hecht’s vigorous defense of the “independence” of the judiciary here:
February 17, 2020
CHIEF JUSTICE HECHT, AS PRESIDENT OF CONFERENCE OF CHIEF JUSTICES, URGES
THE ABA IN AUSTIN: ‘JEALOUSLY GUARD' JUDICIAL INDEPENDENCE
https://www.txcourts.gov/supreme/news/chief-justice-hecht-urges-the-aba-in-austin-jealously-guard-judicial-independence/

What “judicial independence” means in Texas is that the nine Republicans led by Chief Hecht (9 of 9, there are no Dems) get to make up the common law as they go along, whittle down statutes enacted to protect Texans (Whistleblower Act, Public Information Act, Texas Tort Claims Act) by way of statutory (de)construction, and render consumer-protection laws irrelevant by, for examle, providing a common-law workaround. See, e.g., Hill v. Shamoun & Norman, LLP, 544 S.W.3d 724, 732 (Tex. 2018) (approving of quantum meruit recovery against former client where attorney deliberated failed to comply with statute governing attorney-client contingent fee contracts) [Disclosure: I submitted an amicus curiae brief on behalf of the public at large in that case].
In the Texas legal system, critical thinking is not needed. Much rather, it is imperative that critical thinking--not to mention critical speaking and writing--be suppressed. It’s a matter of professional survival.
Texas attorneys and lower-court judges are required to regurgitate precedential nonsense such as the proposition that “the filing of a lawsuit is not a substantial invocation of the legal process.” Such ‘points of law’ that defy common sense as much as they defy logic (filing a lawsuit is, after all, a sine qua non for judicial relief) do, of course, serve a purpose. This particular one allows companies to compel counterclaims to arbitration—if they wish to—after having taken a customer or former employee to court first.
The problem here is that critical thinking would amount to disrespect for precedent and stare decisis, and would “impugn” the integrity of the tribunal.
In Texas, the highest tribunal consists of nine Republicans in the court of last resort, most of them hand-picked by the Republican Governor (the current one is himself a former member of the high court), who operate in an echo chamber and continue to require all supplicants to pray to them. Texas R. App. P. 38 (“Requisites of Briefs”), TRAP 38.1 (j) (“Prayer”).
They give themselves the air of infallibility, and simply declare that all the intermediate courts of appeals got it wrong when they see fit to announce a new precedent, as they recently did in Agar Corp., Inc. v. Electro Circuits Int'l, LLC, 580 S.W.3d 136, 142 (Tex. 2019)(establishing a new limitations period for civil conspiracy claims).
Criticizing nine Republicans for dismantling the civil justice system by bestowing immunity on government entities, government actors, and favored private-sector constituencies--and pointing out that nine like-thinking conservative jurists are using the common law as a tool to suppress the weak—well, that stands to be perceived as “subversion” rather than an exercise in “critical thinking” about the perils posed by single-party control of the judiciary in a common-law system.
Not to mention taking the current incumbents to task for “grounding” their jurisprudential decisions in the vagaries of “totalities of circumstances” and in ad-hoc divinations of “the gist” when the right type and amount of tell-tale “scintillas” aren’t actually apparent in the appellate record to satisfy the mythical “scintilla” standard.
Here is Chief Hecht on Disinformation:
“Yes, the Kremlin interferes with U.S. elections,” he said. “And having blamed HIV on the U.S., the Kremlin — you may have seen in media reports the past few days — says the U.S. is responsible for the coronavirus. But Russian propaganda extends well beyond elections and public-health crises.” He mentioned one report that “details the Kremlin’s Orwellian targeting of the American justice system as elitist, racist, inept, and a tool of the powerful to suppress the weak.

“All too often, people believe what they hear,” Hecht said. The Conference of Chief Justices “is providing a different message.”
https://www.txcourts.gov/supreme/news/chief-justice-hecht-urges-the-aba-in-austin-jealously-guard-judicial-independence/
What’s Orwellian--I would submit respectfully or otherwise--is when the court of last resort for all civil natters makes the victims pay the perpetrators for daring to hold the perpetrators accountable. That’s what we have thanks to GOP-sponsored legislative and judicial access-to-justice denial under the guise of “tort reform” combined with the absence of an effective separation of powers between the political branches and the no-less-political judicial branch in Texas.
Don’t take my word for it. Just read and critically appraise the three SCOTX cases below:
THE TEXAS THREE STEP DOWN THE SLIPPERY SLOPE OF JUDGE-MADE ATTORNEY IMMUNITY
Cantey Hanger, LLP v. Byrd, 467 S.W.3d 477 (Tex. 2015) (law firm immune from liability to non-clients for conduct within the scope of representation of client even if it involves fraudulent alteration of legal documents).
Youngkin v. Hines, 546 S.W.3d 675 (Tex. 2018) (approving of defendant attorney’s invocation of the Texas Citizen Participation Act (TCPA) to have suit alleging attorney misconduct dismissed, and to shift attorney’s fees to the plaintiff).
Bethel v. Quilling Selander Lownds Winslett & Moser PC's, No. 18-0595 (Tex. 2020) (affirming rule 91a dismissal of suit against law firm for destruction of evidence in product-liability action on attorney immunity grounds, and affirming award of attorney’s fees against the wrongful-death plaintiff).