New teaching scholarship: "Before you Ban: Empirical Data on Student Laptop Use"

The synopsis below was sent to me by the author, Professor Kim Novak Morse of Saint Louis University School of Law. According to Professor Morse, this study is part of her Ph.D. dissertation. The author can be contacted at morseka@slu.edu

Laptops and law students go hand in hand in the classroom nowadays. I would not be alone when I say, I find myself having a pang of annoyance toward laptop users since their laptop commitment strikes me as disrespectful. Pedagogically speaking, teaching to heavy laptop users frustrates the typical visual cues faculty rely on that demonstrate students grasp of the information being taught. In effect, teaching to classroom laptop users eerily comes close to teaching to an empty classroom (or so it seems).

Beyond frustration, however, more and more faculty are turning toward banning laptops in the classroom citing, at minimum, that classroom discussion is completely stymied, or worse, students are failing to learn.

The outright banning of laptops seemed hasty to me since most of the reasons for doing so were anecdotal, or based on student-self reporting of misuse.  In order to get an objective picture of off-task laptop behavior, I initiated an empirical study. For the entire Fall 2010 semester, in an IRB-approved observational-study, six of my research assistants and I observed five different law classes where students used laptops (total population size of 95).

In the study, we observed two first-year courses, one second-year course, and two third-year courses at one law school. The research assistants sat throughout the classroom and manually timed, with special software, how often students went on or off-task.

1. What is the actual extent of laptop misuse in class?

The results from the study reveal that indeed students are off task in class; however, it is not as extensive as we thought, nor is it the population of students we thought it was (of course, this depends on whether you are an optimist or pessimist). Second-year students were off task the most time, at 42% of the entire semester. First-years were off task approximately 35% of the time for the semester while third-years spent approximately 28% of their class time off task. Regarding how many individual students were ON-task at a given instant, roughly 82% of third-years, 69% of first years, and 50% of second-years were NOT misusing their laptops (chart 1). 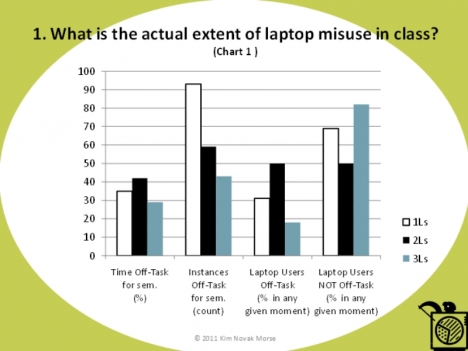 Interestingly, students who had higher LSATs were off-task more than students with lower LSATs (chart 2 & 3). In fact, higher LSAT students reported that they often are off-task in classrooms and only redirect their attention back to the lecture when they need clarification on topics. 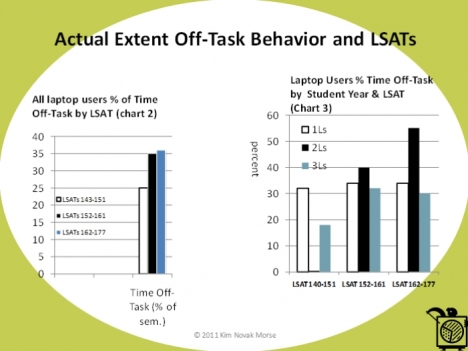 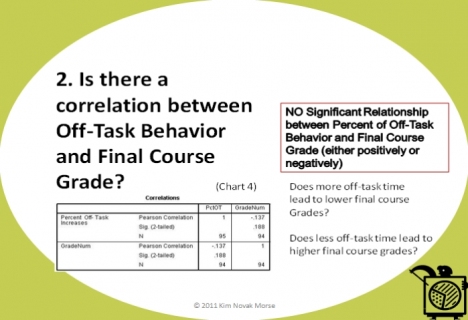 The study is further instructive to legal educators since it also identifies some of the conditions that promote off-task behavior:

2)    When professor is engaged in Socratic method with one student, there is a an increase in off-task behavior by other students.

3)    When a classmate engages with professor, there is an increase in off-task behavior by other students.

Just as students went off-task when certain conditions existed in the classrooms, my study also captured when students re-directed their attention away from off-task behavior. Faculty can employ the following strategies:

3)    “Changing-up-the-Voice” Strategy: Students redirect attention away from off-task behavior when the professor prefaces content with signal phrases like:

“This would be a good exam question...”

Or, by using linguistic mannerisms like intonation, especially rising intonation found in questions:

4)    “Problem-Posing” Strategy: Students redirect attention when the professor asks a problem-solving question to the class (less so than targeting one student).

Some faculty may feel it is just simpler to ban laptops than employ some of the “workaround strategies” offered above. Before doing so, however, I would urge faculty to recall that the study indicates that the majority (82%, 69% & 50%) of the students are not misusing their laptops. In fact, students are listening-- counter to the common assumption that everyone is monkeying around.

I don't think its just that the profs are boring. Obviously if a prof is interesting, it will be easier to pay attention. But, I think the real problem is that the profs don't care about teaching and don't add any value to the material. I had boring profs in undergrad, but people listened to those profs because they offered valuable insight and facilitated the learning process.

In law school, being asked a lot of convoluted questions in a poor attempt to imitate the socratic method is largely ineffective. Most students recognize that and don't waste their time focusing on the professor rambling on about one of the prof's pet theory that is likely not even applicable to the real world. There is a disconnect between the professor's experience and the material. The disconnect is further exacerbated by the professor's generally off-putting communication style.

If your experimental methodology involved, as the post seems to indicate, having a person not normally in the class sit in the back and count you're definitely influencing behavior. In my experience when an outsider is present in class students will change their behavior. Class size is also a substantial factor, in small classes (where there is more spacing and people cannot as readily observe your screen) students spend much more time off topic. I would also be interested in what % of time paper note taking students spent doodling and spaced out. In my one class (1L year) last year where laptops were banned I simply brought in physics problems to have something to do. Although my solution may be atypical for a law student the concept is not. Boring Profs are boring, the internet makes it easier to be distracted but quite frankly I'd rather stare at a blank spot on a wall then listen to someone ramble on about extraneous facts that will never appear on an exam or apply to practice.