Big firm partners are doing well. Associates? Not so much

From the Wall Street Journal:

Law firms are finally starting to recover from the recession, but they aren't taking their young lawyers along for the ride.

Even as profits return, cautious partners with one eye on damaged balance sheets and the other on stingy clients plan to hang onto the lean silhouettes they acquired during the downturn.

That means little relief for young associates—who took on hefty law-school loans, only to run into layoffs and stagnant pay in the years since 2008—and fewer chances for new law-school graduates to get in on the ground floor. And the elusive brass ring of partnership has grown more remote.

"What happens if Greece falls apart again?" says Greg Nitzkowski, managing partner at Paul Hastings LLP, an international firm that has reduced entry-level hires by about a third since 2008. "We just think it's prudent to plan as if this coming year is going to be a relatively flat year.…We're not planning for a big upsurge in demand."

Conditions at law firms have stabilized since 2009, when the legal industry shed 41,900 positions, according to the Labor Department. Cuts were more moderate last year, with some 2,700 positions eliminated, and recruiters report more opportunities for experienced midlevel associates.

But many elite firms have shrunk their ranks of entry-level lawyers by as much as half from 2008, when market turmoil was at its peak. Salaries and bonuses for those associates have remained generally flat. Meanwhile, a degree at a top law school can cost $100,000 or more. 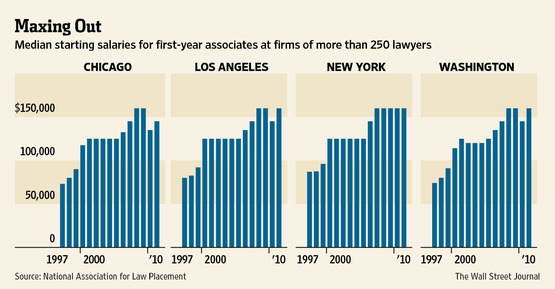 Associates at prominent law firms say some of their peers hired during the boom years are happy just to have jobs at all. "The world has changed," says a senior associate at a top firm.

During the downturn some firms pared associate ranks through layoffs and by delaying start dates for fresh law-school graduates. And many firms for routine tasks now use less-expensive alternatives to young associates, such as contract attorneys and outsourcing firms.

"Law firms basically focused a lot of head-count reductions during the recession on associate ranks, says Dan DiPietro, chairman of Citi Private Bank's law-firm group. "They feel like the associate ranks are where they want them to be."

White & Case LLP, an international law firm, plans to hire about 60 entry-level lawyers this year, compared with prerecession classes of 90 to 100.

"The efficiency of law practice has just changed dramatically in the past five years," says Bill Dantzler, a hiring partner and head of the firm's tax practice. "We don't have to have these armies of young associates. It's good for the clients, it's good for everybody."

That means reputable firms can be even more picky about whom they hire. While firms still compete for the highest-ranking graduates from Ivy League and other top law schools, it is a different story for solid candidates who lack gold-plated résumés. Students with lower class rankings or from second-tier schools who once would have made the cut "wouldn't have a prayer of getting in now," Mr. Dantzler says.

For those who do land jobs at big law firms, the hours remain grueling. In 2010 associates at firms with more than 700 lawyers billed an average of 1,859 hours—the equivalent of more than seven hours a day—according to the National Association for Law Placement.

As head counts fell, the average workload for those associates has risen 2.3% since 2007, or about 50 extra hours a year.

And the road to partnership is longer and more uncertain than in the past. Many lawyers now toil eight or even 10 years before being chosen. A decade ago, the most common partnership track took seven years. Other firms have thinned their top ranks of partners who didn't bring in enough business, making it even tougher to elbow into a spot.

Partners at several large law firms also say they don't plan to raise associate salaries, which haven't increased since 2007. December bonuses remained roughly the same as in 2010, with first-year associates at elite firms such as Cravath, Swaine & Moore LLP and Weil, Gotshal & Manges LLP getting $7,500. The most senior associates received bonuses of $37,500 to $42,500.

"Most firms are hesitant to lock themselves into something they can't sustain," says Paula Alvary of consulting firm Hoffman Alvary. "While there is clear evidence that work levels are returning, they're not at prerecession levels for most firms."

Still, many people continue to pursue law as a career, not least because the median starting salary for entry-level lawyers at top New York firms is $160,000. That is nearly double the going rate in 1996, before the tech boom drove salaries skyward.

And phones are ringing again at law-firm recruiters. Junior lawyers who once clung white-knuckled to their jobs are loosening their grips and moving to corporations' law departments or to law firms where they might have better shots at making partner.

Eric Fishman in 2010 took what many colleagues then saw as a huge risk when he left one of New York's elite practices for midsize Pryor Cashman LLP, where he hoped to get more experience running cases and building a practice.

"There was little chance many of my peers would have considered a move from a big law firm at that time," says Mr. Fishman, now a senior associate at the respected firm. "Now they're less fearful; the economy is getting better."

But the pace of such movement isn't what it was. Before the downturn, firms lost between 25% to 30% of their associates after a few years, people in the industry say. R. Bruce McLean, chairman of Akin Gump Strauss Hauer & Feld LLP, says the attrition rate at his firm is around 15% now.

"It's like lots of things in our economy," he says. "The outlook is brighter, the anxiety level is diminished, but it's not completely gone.…This is still a period of anxiety for our entire associate population. This is not what they anticipated when they started law school."