Upon Opening, It Gave Off a Nose of "Damp Forest Floor," But With Some Air It Was "Elderflower" With Just a Hint of "Marzipan"

If like me, you are a fan of, but overwhelmed by, Steve Bainbridge's knowledge of food and wine, there's a product for you.  My wife ordered the WSJ Wine starter kit, and I have no idea if this stuff is any good, but it comes with a poster-like "Taste Prompter" that is something like a color wheel.  Tastes are categorized into Vegetal, Chemical, Earth, Animal, Spice, Sweet, Fruit, Wood, Flower, and Fire.  Then there are further subdivisions (e.g., Wood divides into Nuts and Resins; Fruit divides into Tree Fruit, Processed, Tropical, Citrus, and Berry).  Then we get to the tastes themselves.  As an aspiring horseman, I like "sweaty saddle."  "Honeysuckle" sounds nice, but I can do without "roofing felt."  Same with "almond" and "pencil-shaving."  I was disappointed to see there is no "crumbling Northeast Reporter 2d."

New AALS Section Newsletter Is Out, Provides Many Resources on PR

Here is the hot-off-presses Newsletter of the AALS Section on Professional Responsibility.  Thanks are owed again to the generosity of the AALS section officers, both for the time and effort it took to write such a useful newsletter and for allowing us to link to it.  You can find it in pdf here:  Download AALSNewsletterSum09.

Thanks especially to Randy Lee at Widener, its general editor, and Laurel Terry at Penn State, the section chair this year, as well as all the scholarly contributors from profs at various schools.  For example, as always, Fred Zacharias (San Diego) has an excellent summary of recent scholarship in the field.  In her chairperson's intro, Professor Terry not only notes the new listserv but also invites you to attend a section dinner at The Palace Cafe in New Orleans during the AALS annual meeting.  Dinner is Friday night, Jan. 9, 2010, at 7:30 pm.  Just give her a heads up, as explained on page 3 of the newsletter.  She chose a great menu, with three entree options.  She especially noted that she is welcoming attendance at the meal by those who teach legal ethics who may not have it as their main subject and may not be active in the section.  See you there!

This blurb from the Fifth Circuit Civil News daily update shows that sometimes you punish yourself by being too good, but I bet the inmate wears the opinion as something of a badge of honor, especially if he eventually actually wins on his religious freedom claim.  I just wish it were published so more people could see the logic.  But my thanks, still, to Robert McKnight of the Civil News for bringing it to light.

The U.S. Court of Appeals for the Fifth Circuit did not publish any non-habeas civil decisions on Monday, October 5. It released this notable unpublished decision:  McAlister v. Livingston, No. 08-20297 (5th Cir. Oct. 6, 2009) (King, Davis and Benavides) (per curiam; unpublished):  The district court denied inmate McAlister's request for appointment of counsel in his civil rights lawsuit against Texas prison officials. The lawsuit alleged religious discrimination against Wiccan inmates in violation of the First Amendment, the Religious Land Use and Institutionalized Persons Act, and the Equal Protection Clause.  Holding:  Affirmed with respect to the denial of appointment of counsel. The district court did not provide reasons for the denial, but the basis was clear enough for affirmance:  "The record, 997 pages long, contains numerous pleadings, briefs, and motions that McAlister has drafted and affidavits he has gathered from various individuals. These documents are all relevant and on-point.... McAlister has sufficiently investigated his case, and his presentation of his claims and the relevant legal issues to both the district court and to this court for review has been adequate."  No other factors weighed in favor of appointment of counsel.  And, indeed, the Court vacated and remanded with respect to the First Amendment and RLUIPA claims.  (Appeal from S.D. Tex.  Case No. H-05-3228. [Link to PDF.])

That may be the 'obvious' reason for denying appointed counsel:  he was too good.  It certainly flies in the face of the obvious counterground:  my general principle that one does not needlessly piss off the group leader of the Wiccans.

If I may reminisce, it reminds me of a case I worked on while clerking for the Fifth Circuit just after the split with the Eleventh (we got custody of the Texas inmates, while they got to raise all the loons in Florida).  Some warden decided that too many clever inmates were claiming to be Jews to get the kosher food.  Maybe it was less Alpoesque, I do not know.  But I do know this:  the warden instituted an earnesty-sifting process by hiring a local rabbi (in rural East Texas, must have been a lonely guy back then) to "test" prisoners on their Jewishness.  I know that sounds like a setup for some bad ethnic stereotype jokes (or an even worse moile joke), but it is not.  (If they claim to be Presbyterian, I would offer them a ham sandwich made with Miracle Whip and see if they gag, thus denying their innate Presbyterishness.  Or just play Art Garfunkel's solo album and see if their eyes dialate.)  As I recall, the Fifth Circuit struck down the testing procedure rather handily.  The principle seemed to be that anyone could become Jewish if they wanted to be.

Merton's unintended consequences of social actions tells me that the predictable next step for the warden would be to make the kosher food kosher but inedible, or at least equally inedible if he wanted to avoid another pro se complaint.

Prepare for the Bar at Harvard

Share
There was a poster for this on the subway this morning.  I did more than a double take when I saw the unmistakable crimson VeRiTas logo.  You can get Harvard on your resume for only $225 and in one day.  And it is bar-related.  [Jeff Lipshaw] 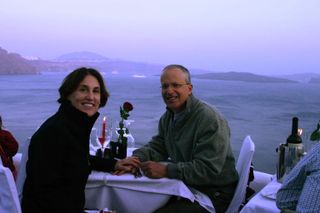 Congrats and further best wishes to Jeff and Alene Lipshaw, who are now celebrating their 30th wedding anniversary (?!!) in Santorini, Greece.  I know they are having a good time.  And we are happy for them!  [Alan Childress]

UPDATE:  Thanks, Alan - this is this year's alternative to the Law & Society confab in Denver.  Damn!  And who's the dorky guy with the beautiful woman?  [Jeff Lipshaw]

It is that time of year again, and quite a tradition that the Washington Post started recently. It caught on this year quite well, and great finalists abound, with a photo gallery and story here linked.  Check out the peeps' Thelma and Louise.  And below is one quite topical for 2009. 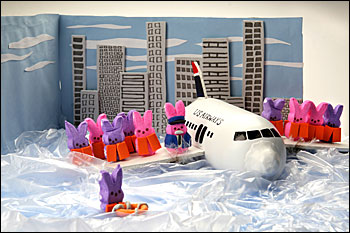