Most of the ebooks and print books produced by the book project I started in 2010, called Quid Pro Books, are on law, history or political science, and are not really the topic of this blog. But one we released this week goes to its core. It is a republication, in Kindle, Google Play, and 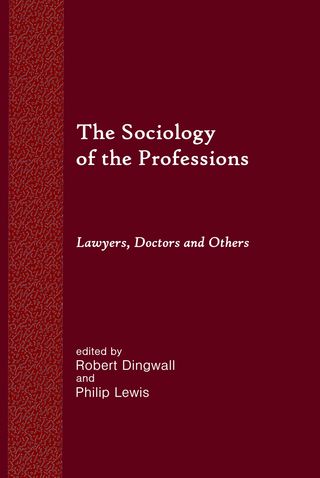 Nook formats (and next week in Apple iTunes; this summer in paperback), of the renowned collection edited by Robert Dingwall and Philip S.C. Lewis, The Sociology of the Professions: Lawyers, Doctors and Others. The new edition adds a substantive 2014 Foreword by Sida Liu of the University of Wisconsin. Chapters are by Dingwall, Lewis, Paul Atkinson, Maureen Cain, John Eekelaar, Eliot Freidson, Marc Galanter, Gordon Horobin, Malcolm Johnson, Geoff Mungham, Topsy Murray, Alan Paterson, Dietrich Rueschemeyer, P.M. Strong, and Philip Thomas. A full description is found at any of the links above.

We also just released a courtroom thriller by University of Houston law prof David Crump, The Target Defendant. Its ebooks are out already, and the paperback will follow next

week. And last month we published a mystery novel by Stanford law prof Lawrence Friedman, called Who Killed Maggie Swift? Here is an interview of Professor Friedman in Palo Alto Weekly in which he discusses mystery writing and his other books with this publishing project ... and shouts out to me!  [Alan Childress]

Listed below are links to weblogs that reference New release in ebooks of classic collection on the sociology of the professions: