Jerome Carlin on the Solo Practitioner's Practice and Ethics: Lawyers on Their Own 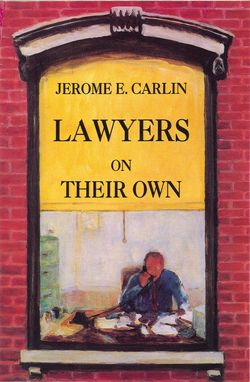 At the Quid Pro project, we republished Jerry Carlin's classic sociological/ethics study of solo practitioners, Lawyers on Their Own. Through extensive interviews and empirics, he exposed what then was a hidden, and somewhat desperate, reality--and influenced this kind of research in the profession and its subgroups. Dr. Carlin, who became a full-time artist after serving as director of a legal aid association in SF, contributed the amazing cover art. And Bill Gallager, a law prof and ethics teacher at Golden Gate, wrote a new Introduction on the book's lessons and scholarly impact. I thought this would be of interest to blog readers. The book is a new paperback at Amazon, and also in ebook: Kindle, B&N Nook, Smashwords, and Apple iBooks formats.

Not on topic, but just fyi, Stanford Law Review and QP released to Kindle, Nook, and Apple formats the SLR's latest issue, which is a symposium on patent law and its future after

Bilski v. Kappos. Subjects include business methods and biotech IP, and the writers are such internationally known IP scholars as John Duffy and Mark Lemley. ...Also at Kindle, Nook, SW and Apple (and Aug 25 in print) is Michael Meltsner's account of how his team at the NAACP Inc. Fund took on the death penalty in a 9-year campaign, and won (for a while, at least). It's his book Cruel and Unusual, first published by Random House; it became our 50th book published since April 2010.

As to Mike's post on paying bar dues from the trust account, I recall that Nancy Rapoport once called such a move the bar equivalent of a kick-me sign.

Listed below are links to weblogs that reference Jerome Carlin on the Solo Practitioner's Practice and Ethics: Lawyers on Their Own: